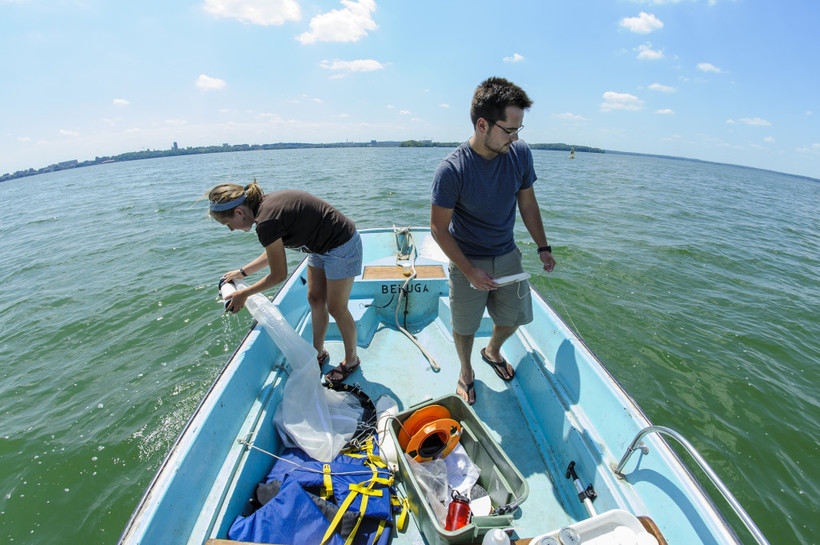 The spiny water flea has invaded Wisconsin lakes, causing trouble for both fishermen and fish.

"We have it in a dozen or so lakes. It’s been detected in each of the Madison lakes, and a few of the northern Wisconsin lakes as well as in the Northern Highlands Lake District," said University of Wisconsin-Madison Center for Limnology researcher and freshwater ecologist Jake Walsh.

Spiny water fleas often spread through recreational boating and are about the width of a pinky finger. Aquatic invasive species organizations are working to educate boaters and decrease the spread.

"One species in one lake is having a really, really big effect," Walsh said. "It’s not just a fishing problem, it’s a problem that affects everything we do in the lake,"

The tiny organism, which reproduces asexually and lives in populations, hatches in the bottom of water bodies and eats zooplankton, which are food to native Wisconsin fish, Walsh said. They also eat daphnia, which are responsible for consuming algae and keeping the lake clear. Since there are not enough daphnia eating algae, the lakes look much murkier.

Places like Dane County are forced to pursure programs to offset the ecological impact of the spiny water flea, Walsh said. This includes a potential program to reduce agricultural runoff in order to decrease algae growth.

Organizations like the Sea Grant Program are trying to stop the spread of the spiny water flea. One effort to prevent the spread is the Clean Boats, Clean Waters program, which trains volunteers to teach boaters how to clean their boats.

"We do know the law to stop the spread of aquatic invasive species – stop and remove, drain and remove – is really effective," Campbell said.

Campbell also suggested wiping off equipment with towels, treating equipment with bleach solution (2 ½ tablespoons per gallon of water) and spraying off boats with a high pressure washer.

"Unfortunately, we can’t reach everyone. We did reach, I think 230,000 boaters with our Clean Boats, Clean Waters program last year, but we don’t have watercraft inspectors everywhere so we’re obviously not meeting everyone," he said.

There might be alternative solutions in the future, Walsh said. Certain fish might be the next step to ending the spiny water flea problem.

"We see a lot of fish in Lake Mendota eating the spiny water flea, but not enough to control the population, yet," Walsh said.

The spiny water flea’s long tail can make it hard for small fish to handle them, but Bluegill’s detach the tail before consuming the organism, Walsh said.

Still, Campbell encourages boaters to do their part.

"We have a lot of control over what’s moving and where because a lot of things are transported by boats and by us," Walsh said.