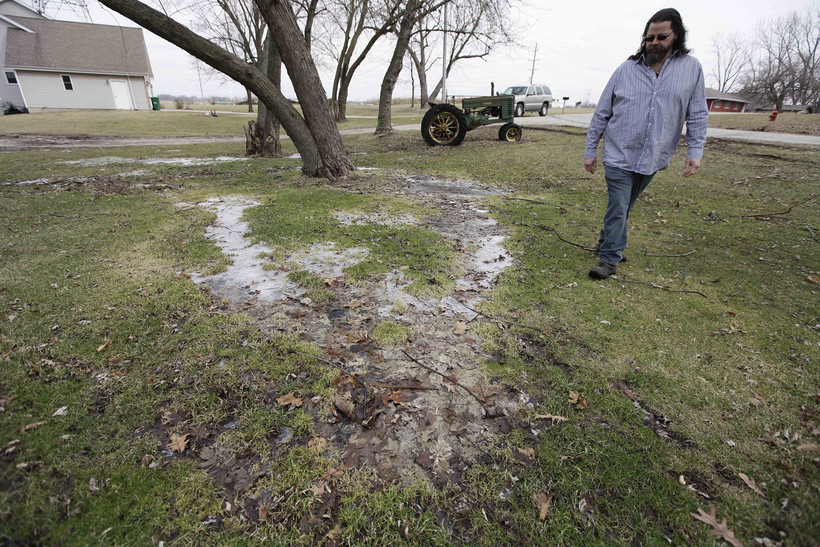 In this photo taken March 12, 2009, Mayor Mike Cerny walks past seepage from a septic field in a resident's yard in Carbon, Hill, Ill. Cerny is hoping the small town outside Chicago can win some of the federal stimulus money set aside for sewage and water-quality projects. M. Spencer Green/AP Photo

The Southwestern Wisconsin Groundwater and Geology study started in 2018 and has tested hundreds of private wells in Grant, Iowa and Lafayette counties.

Now in phase two of the study, the latest round of water samples were collected in August from 34 wells that were found to be contaminated in phase one.

Researchers found fecal contamination in 25 of the selected wells and analyzed the microbes to determine the source of the waste.

Lynda Schweikert is conservation, sanitation and zoning administrator for Grant County. She said the source of fecal contamination can vary by season. But the presence of human wastewater is emerging as a trend.

"Seeing the human fecal contamination being the majority of the last two testings, we are looking at our (septic system) maintenance program and making sure that everyone is following the rules," Schweikert said. "Even though we’re waiting for all four of the rounds to be complete, there are some steps that are being taken to look and see if there's things that we can do right now."

The first round of source sampling in April found 32 out of 35 wells had fecal contamination. Thirty wells had human microbes, 17 wells had cattle microbes and five had pig microbes.

But Mark Borchardt, research microbiologist for the U.S. Department of Agriculture and an author of the SWIGG study, said it's too soon to say septic systems are the main source of contamination.

"I wouldn't put a whole lot of stock in the numbers right now. One can’t say one's greater than the other because it's just too early in the sampling program," Borchardt said.

Borchardt said a similar study he completed in Kewaunee County showed prevalence of livestock manure in private wells went up during times when more farmers were spreading manure on farm fields.

Another round of water samples were taken in November and a fourth round is planned for January.

Schweikert said the test results are anonymous so officials can't be sure what kind of septic system well owners have. But she said homeowners in rural parts of the county likely have private septic systems.

"The downfall of our septic systems is it’s out of sight, out of mind," Schweikert said. "Flush the toilet in the house, the waste leaves the house and doesn't back backup into our house so we’re convinced that its working fine."

She recommends residents have a plumber check their septic systems every three years, as well as regularly cleaning filters and addressing soil compaction or ponding in their drain field.

Borchardt said researchers are also paying attention to recent the impact of the weather on water sampling.

“One of the things we learned in Kewaunee County is that the amount of rainfall two days previous to the time that we sampled was statistically associated with likelihood of a private well being contaminated," Borchardt said, "We’ll gather that same sort of rainfall data for this study and we may see the same thing."

The final phase of the study will focus on land use and the geology of the region. Borchardt said researchers are already using county and federal data to track the location of septic systems, agricultural fields and manure storage facilities.

“We’ll be spending a good part of 2020 doing statistical modeling relating land use to the probability or the likelihood of a well being contaminated," Borchardt said.

He said researchers at the Wisconsin Geological Survey are also studying the region's aquifers and geology, relating that information to well construction records.

Last month, the Lafayette County Board considered a resolution to limit access to SWIGG study results and prevent county officials from commenting on the study. The board ultimately tabled the resolution.