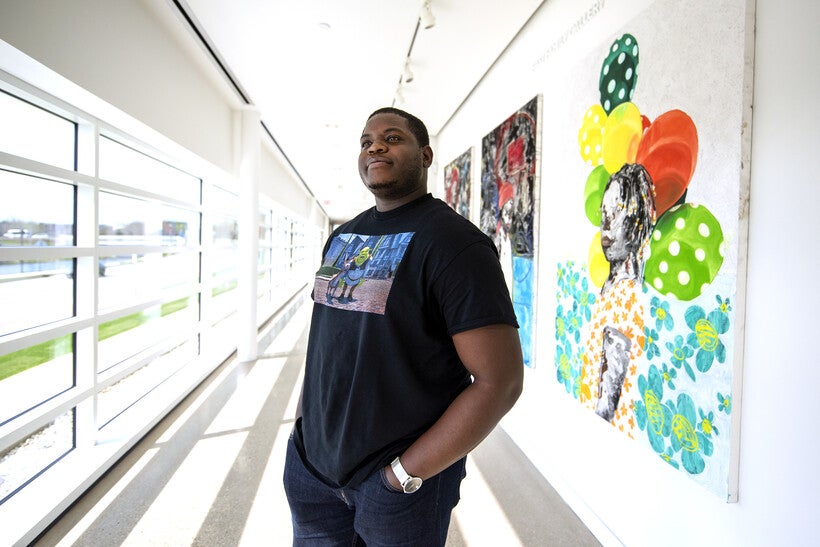 Khari Turner stands near an exhibition of his artwork Wednesday, May 4, 2022, at the Museum of Wisconsin Art in West Bend, Wis. Angela Major/WPR

Turner has an exhibit overlooking the river at the Museum of Wisconsin Art until July 10
By Jonah Beleckis
Share:

When Milwaukee-native Khari Turner brings water from the Atlantic or Pacific oceans, Lake Michigan or the Milwaukee River and puts it into his paint, he’s bringing in a partner.

He takes his paint and mixes in water that has a personal connection to his life or to Black history. Then, he starts to paint and lets the drops fall where they may.

"Whatever happens to the water — however it moves or drips or does anything — I only have a certain amount of control over it," he said. "But that paint or that water and ink (will) do whatever it wants to do.

"That’s what makes the painting have a soul, I feel like, because I can’t control it," he continued. "However it finishes is just something that I work with. So, it’s like a partnership in one way or another. Me and the water finish the piece." 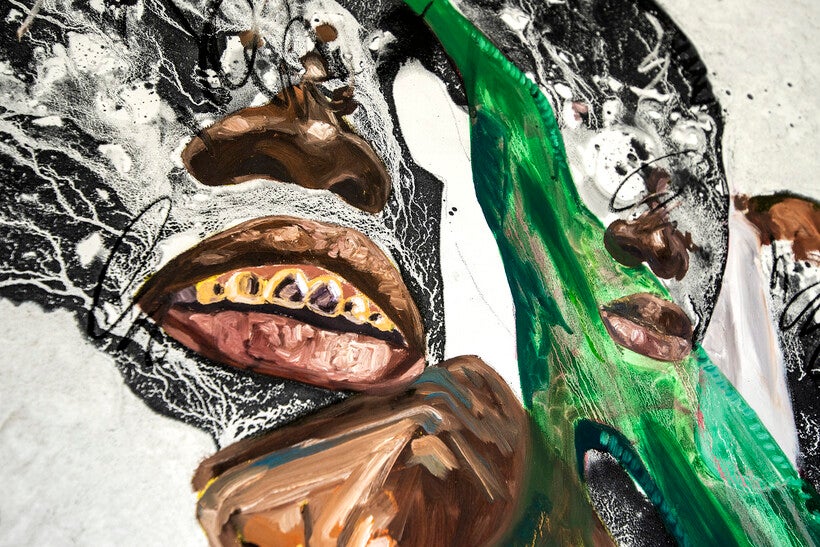 One of Turner’s partners, the Milwaukee River, flows outside his first solo museum show in his home state. Twenty-six paintings are on display in a Museum of Wisconsin Art hallway that overlooks the river in West Bend, according to a museum press release.

The show, called "Mirroring Reflection," opened April 30 and will run until July 10. While the exhibit already started, an opening ceremony is scheduled for Saturday from 2 to 4 p.m.

That’s because Turner recently returned to the country after showing his work at the 2022 Venice Biennale, an art show in Italy that features creators from all over the world.

"It was fantastic. It was great. I don’t even know what to say," he said in an interview with Wisconsin Public Radio. "It was like one of those things (that) you do and you’re like, 'I just did that?'" 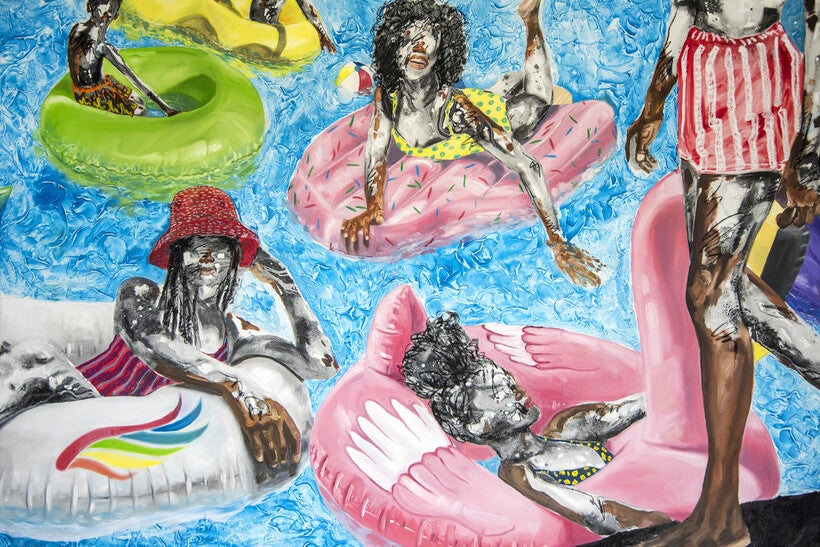 In Venice, Turner was surrounded by water. He said he had to get around by boat if he couldn’t walk somewhere.

But he is used to being around water. He used to teach swim lessons. He would go kayaking and canoeing at a camp in Wisconsin. Lake Michigan was very close to his home.

He said he thinks about what it means to drink water that was sourced through one of the Great Lakes.

"That connection to water is really just one of those things that unifies everybody because, one way or another, everybody is a part of this water," he said last month on WPR’s "Central Time."

Turner first got the idea to incorporate water in his painting while he was in a residency program near the Pacific Ocean in a different Venice — this time in California. He finished his master’s degree at Columbia University near the Atlantic Ocean in New York City, where he went to the lower Manhattan docks after studying where slave ships arrived in the city.

He knows that people died in the ocean during the trans-Atlantic slave trade. He said their DNA lives on in the water, which he brings to his painting. The water becomes the soul of the art.

He said people usually perceive the soul by looking into eyes. But he paints his subjects without eyes, so the body becomes where the soul is found. The water is the soul. It’s the history of the journey. 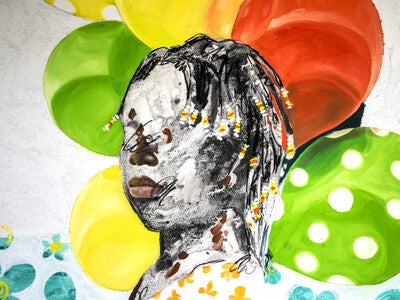 Turner understands how water has been going through its cycles on the Earth for millions of years. The water on Earth now has always been on Earth, he said.

He said the "Mirroring Reflection" exhibit is a coming-of-age story through the lens of the water cycle. Children are rivers, rambunctious in nature. Young adults are lakes, seen as the future. Elders are the ocean, full of old wisdom.

History is a part of Turner’s work, but it’s not everything. He doesn’t want someone to look at his painting and assume it’s a direct reference to slavery. Rather, he said slavery is a part of the subject’s history but, crucially, it’s not who they are.

He thinks about his own life the same way. History is important. It influences him. But he still has his own identity. He still goes to get breakfast and to the movies. He’s a thinker who was obsessed with perfection. He worked for the Milwaukee Bucks as a cheerleader. He propped up work from incarcerated artists. He wants to create a community center and hold ocean cleanups. 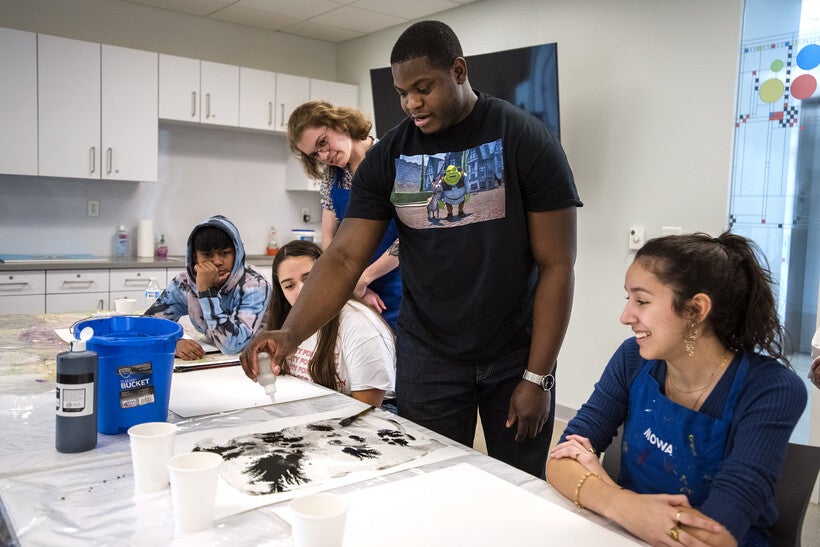 Khari Turner demonstrates part of his artistic technique using water from the Milwaukee River during a workshop with the Museum of Wisconsin Art Teen Council on Wednesday, May 4, 2022, at the museum in West Bend, Wis. Angela Major/WPR

History can’t be everything because sometimes it is left unknown. Turner said he doesn’t know his father, and therefore he doesn’t know any of the history on that side of his family.

But he said his story, just like his paintings, can be whole without having it all. The present self and the history come together like two partners on a canvas.

"I know what I am now," he said. "Regardless of how much information you’re given, it’s still a whole painting. It’s still an image in the same way that I’m still a person." 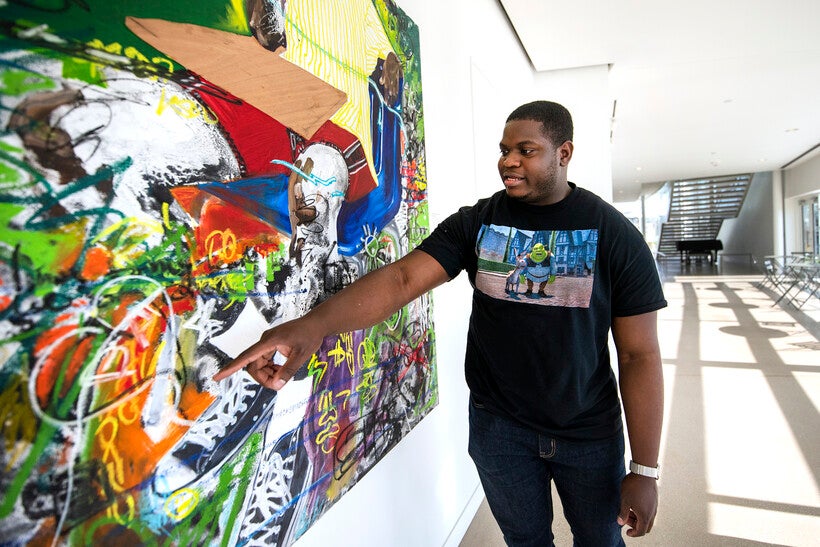 Khari Turner points to a detail in one of his pieces, “Rough Days and Chalk Boards,” during a tour with the Museum of Wisconsin Art Teen Council on Wednesday, May 4, 2022, at the museum in West Bend, Wis. Angela Major/WPR 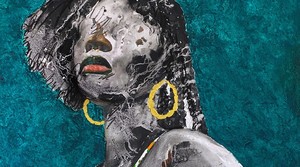 Artist and Milwaukee-native Khari Turner was recently dubbed one of seven artists to watch in 2022. We'll hear about his upcoming exhibit at the Museum of Wisconsin Art featuring his paintings that incorporate water from lakes, rivers and oceans that are tied to Black history.