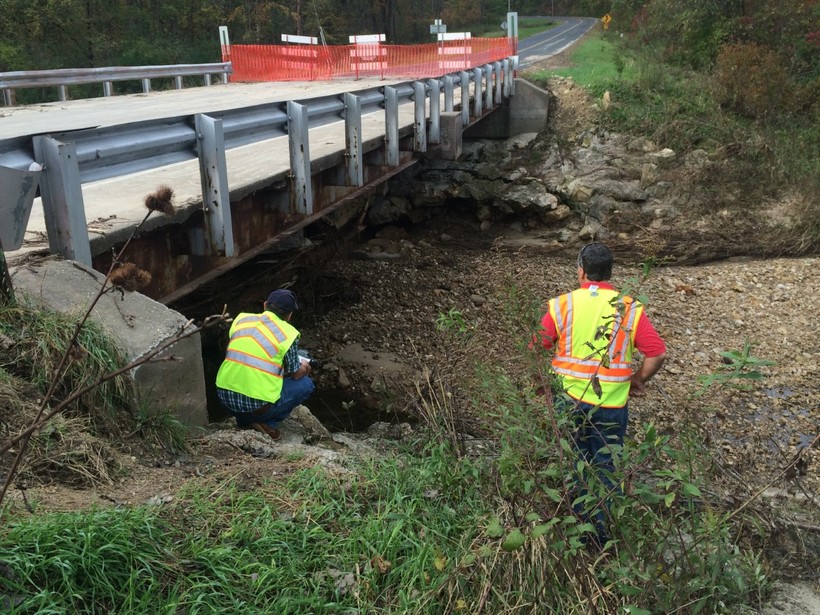 Federal Emergency Management Agency crew members inspecting September 2016 flood damage in Vernon County. This bridge on County Road JJ has yet to be fixed because of complications with funding.

Crews from the Federal Emergency Management Agency are in western Wisconsin to assess recent flood damage this week.

"It took us about two days and we got everything back into shape. But we haven't received any money yet," said Edward Schultz, chairman of the Town of Fremont.

Like many communities in the region, Fremont had thousands of dollars in damage after last year’s flooding.

When the region received a federal disaster declaration, communities were eligible to be reimbursed for around 75 percent of repair costs. But Schultz said fronting the cost of repairs has had an impact on the town.

"We had to take the money that we were going to use for graveling our roads this summer and we had to shorten it up," Schultz said.

Schultz said the town clerk recently received word from FEMA that they should have their reimbursement check soon.

And Lori Getter, spokeswoman for Wisconsin Emergency Management, said it's not unusual for the process to take a year.

"For any community, I think these projects are costly because this is an expense they didn't expect," Getter said. "While it's unfortunate that it takes a while for this process to go through, at least there is that reimbursement process."

Repairs have to be completed before they’re eligible for reimbursement through FEMA or state programs. Since last year’s disaster declaration wasn’t announced until late October, Getter said some projects were not completed until this year.

But the long wait time has some local officials, especially those hosting another round of FEMA assessments, wondering whether it's worth it to apply again this year.

"The damage wasn’t to the extent where (some local officials) feel it's justified to spend the time to do a new application," said Phil Hewitt, highway commissioner for Vernon County. "They haven’t received (FEMA assistance) from last year yet and some people are of the opinion that we’re not going to receive it."

Hewitt said he’s confident the county will be reimbursed by FEMA and that agency officials are doing the best they can. But he said the review process needs to be updated.

Vernon county’s highway department has yet to finish their biggest repair from last September’s flooding because of complications with FEMA rules.

Hewitt said initial estimates found a bridge on County Road JJ was eligible to be replaced after it was washed out by the flood, but another assessment found FEMA can only reimburse repairs to the bridge, not replace it.

"The price keeps getting more expensive to fix it, and every time something happens where the price is more to fix it, I go back and try to get them to help me replace the bridge with a new bridge and not fix the old one because I don’t think that’s the best way to spend our money," Hewitt said. "Unfortunately, I haven’t won that battle yet."

Despite these frustrations, Hewitt said he appreciates FEMA is willing to help. And he hopes that help will arrive soon, especially for smaller communities in Vernon County.

"These small townships, they’re hurting," Hewitt said. "They borrowed money to pay for their flood damage and they’re making loan payments and still trying to do their maintenance and all of the above. So the sooner, the better."

FEMA crews are expected to finish assessments on the latest flood damage by the end of the week.