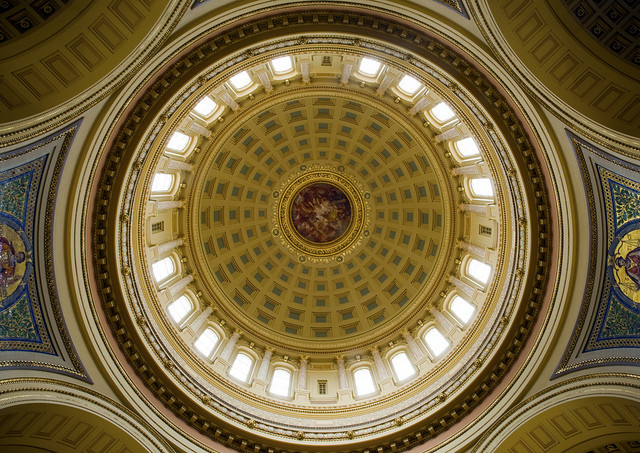 Ethics Administrator Brian Bell And Elections Administrator Mike Haas Could Be Ousted For Their Connection To The Government Accountability Board
By Shawn Johnson
Share:

The state Senate is scheduled to vote Tuesday on the confirmations of Brian Bell and Michael Haas, the leaders of Wisconsin's ethics and elections commissions. If the vote goes as planned for majority Republicans, both men will be fired, leaving vacancies at the top of both agencies with the 2018 election season on the horizon.

Bell and Haas are being targeted for their roles at the Government Accountability Board, which Republicans disbanded in 2015 because of its role in a John Doe investigation of conservative groups and Gov. Scott Walker's campaign.

Here's some background on Bell and Haas and how they got to this point.

Who is Brian Bell?

He's the administrator of the Wisconsin Ethics Commission, one of the agencies lawmakers created to replace the now-defunct Government Accountability Board, known as the GAB. The Ethics Commission administers and enforces Wisconsin laws that cover campaign finance, lobbying and the code of ethics for Wisconsin public officials.

Who is Mike Haas?

Why are they on Tuesday's state Senate calendar?

The state Senate is scheduled to vote on their confirmations, or if enough majority Republicans get their way, vote against them. Until now, Bell and Haas have been leading their agencies without Senate confirmation.

Definitely. According to the office of the Wisconsin Senate's Chief Clerk, the last time the Senate voted against someone's confirmation was May 4, 2006, when Republican senators rejected Democratic Gov. Jim Doyle's appointment of Michael Rosen to the Wisconsin Technical College System Board.

Why are Republicans unhappy with Bell and Haas?

Because Bell and Haas both worked for the GAB during a time when the agency was involved in an investigation of Walker and his campaign — an investigation known commonly as John Doe 2. Republicans were so opposed to the Walker John Doe that they voted to disband the GAB in 2015. They also voted to ban such investigations in the future.

It's an investigative tool used by government prosecutors to gather evidence to determine whether a crime has occurred. A prosecutor asks a judge for a John Doe, and if a judge grants it, they also oversee it. In theory, these investigations should be conducted in secret, but that wasn't the case with the John Doe investigation involving Walker's campaign.

If the GAB was eliminated and John Doe 2 was closed, why are we talking about this now?

Because Republican Attorney General Brad Schimel released an investigation of John Doe 2 leaks in December. Schimel's report revived many of the GOP criticisms of the GAB. It also criticized the current ethics and elections commissions for their handling of records in the case.

Is every John Doe given a number?

John Doe 2 was a more expansive investigation into whether Walker's campaign illegally coordinated with conservative groups ahead of Wisconsin's recall elections. The Wisconsin Supreme Court shut it down July 16, 2015. Later that year, Wisconsin Republicans passed laws that eliminated the GAB and ended the ability of prosecutors to use John Does to investigate political crimes. They also passed a law permitting coordination between candidates and third party groups that can accept unlimited funds and keep their donors secret.

This one's more complicated. Schimel introduced the term "John Doe 3" in his December report to refer to a previously undisclosed investigation involving Republican legislators. Schimel later called John Doe 3 a "term of art" to refer to records seized through the John Doe process that weren't specifically authorized by a John Doe judge.

"That was the thing that was most concerning to us is that we found that they'd gone to these next levels," Schimel said.

But former attorneys with the GAB said Schimel made a mistake in releasing information into possible campaigning on state time by Republican lawmakers. The investigation did not result in charges, they said, and should have remained private.

"Irresponsible," said former GAB attorney Shane Falk, who is now a lawyer in private practice. "Unbelievable that with the dozens of attorneys that they have at the attorney general's office that they would say something like that."

Who is Shane Falk?

Falk helped lead the GAB's involvement in the John Doe 2 investigation of Walker. Much of Schimel's investigative report is directed at him. In the report, Schimel quotes Falk emails where he talks about the "bastardization" of Wisconsin politics and refers to members of the public as "sheeple."

Falk says Schimel cherry-picked emails to present him in a bad light, but he concedes that some of his emails were unprofessional.

"Sure, I could have used softer words," Falk said, "If anything, I was a zealous advocate for what the law was, regardless of who was violating it."

Falk points to a 1999 Wisconsin Court of Appeals decision that found coordination between candidates and third party groups was illegal. The Supreme Court ruled otherwise when it shut down the Walker investigation and Republicans later passed a law that specifically allowed coordination between candidates and groups that can keep their donors secret.

Back to Bell and Haas — how were they connected to John Doe 2?

What are Bell and Haas saying about their time at the GAB?

While they're both on the hot seat, they are definitely not on the same page when it comes to the agency where they both worked.

Haas has defended the GAB, saying "nobody can point to any action" by the former agency that was partisan.

Bell has sought to distance himself from the GAB, saying the agency gave staff too much discretion, leading to "biased" actions.

"I think what I saw was a culture of an organization that didn't prevent partisanship," Bell said.

If the Senate votes against the confirmations of Bell or Haas, is it final?

Not necessarily. Some backers of Bell and Haas argue that only the ethics and elections commissions can hire and fire them, not the Senate. Those commissions unanimously support both men and don't want to hire new leaders, especially in what promises to be a busy election year.