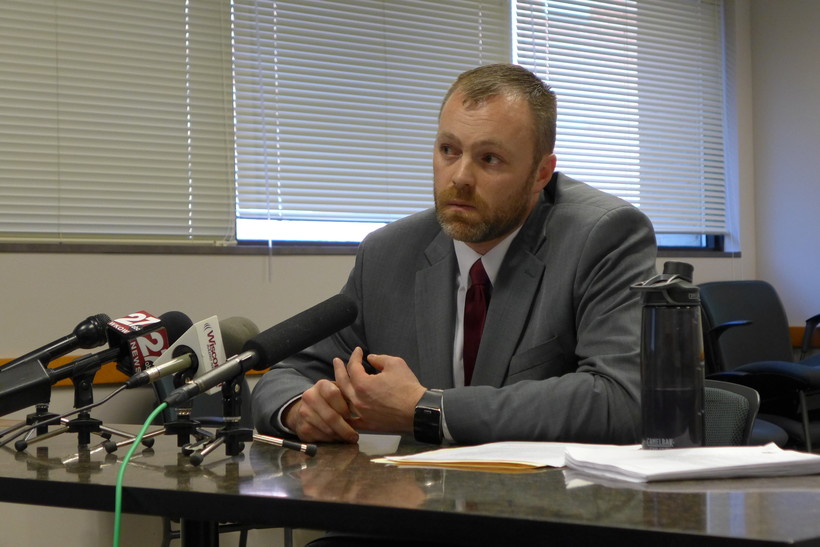 Ethics Administrator Brian Bell Is Distancing Himself From The Now-Defunct Government Accountability Board
By Shawn Johnson
Share:

The heads of the state's ethics and elections commissions took different paths to try to save their jobs Thursday, with one of them criticizing the former agency where they both worked and the other one defending it.

Ethics Commission Administrator Brian Bell sent letters to state senators distancing himself from the now-defunct Government Accountability Board, saying one of the reasons he left the agency was that staff were given too much latitude, creating "inconsistent, subjective, and biased actions" that led to uneven enforcement of the law.

"I think what I saw was a culture of an organization that didn't prevent partisanship and allowed subjectivity to occur," Bell told reporters at a press conference Thursday, adding that the way he manages the Ethics Commission "helps prevent that from even possibly occurring."

The GAB came under constant criticism from Republican lawmakers before they disbanded it in 2015, partly because of its role in a now-closed John Doe investigation of Gov. Scott Walker's campaign.

Bell worked at the GAB under now-Elections Commissioner Mike Haas, who like Bell, is fighting to keep his job ahead of a Senate confirmation vote Tuesday.

Haas defended his former agency, saying Bell's critiques were "general accusations" without a lot of specifics.

"I think it's unfortunate," Haas said. "I was Brian's supervisor for a little over a year. None of these concerns were ever brought to my attention."

Both Haas and Bell came under scrutiny after Republican Attorney General Brad Schimel released a report on leaked documents connected to the Walker investigation. While Schimel was critical of the GAB's handling of the case, he did not recommend charges.

But Sen. Majority Leader Scott Fitzgerald, R-Juneau, seized on the report, calling on Haas and Bell to resign, arguing "any leftover remnants of the partisan GAB will never have the confidence of the public."

Haas and Bell have resisted, and they've been given unanimous votes of confidence by their commissions, which are split evenly between Republicans and Democrats.

While they're now taking different approaches in their public comments about the GAB, they've both downplayed their role in the probe of the Walker campaign, with Bell saying he was not involved in any investigations and Haas saying his role didn't go beyond the routine review of legal documents.

Haas and Bell have also highlighted their personal stories for senators, partly because Fitzgerald has said he won't give them confirmation hearings to publicly make their cases.

For example, Haas has taken to Twitter to list reasons he thinks senators should support him, ranging from his oversight of recount elections to the way he handles angry protesters at the agency.

"It's not a good time to have a distraction at the agency when we are trying to conduct more elections this year," Haas said.