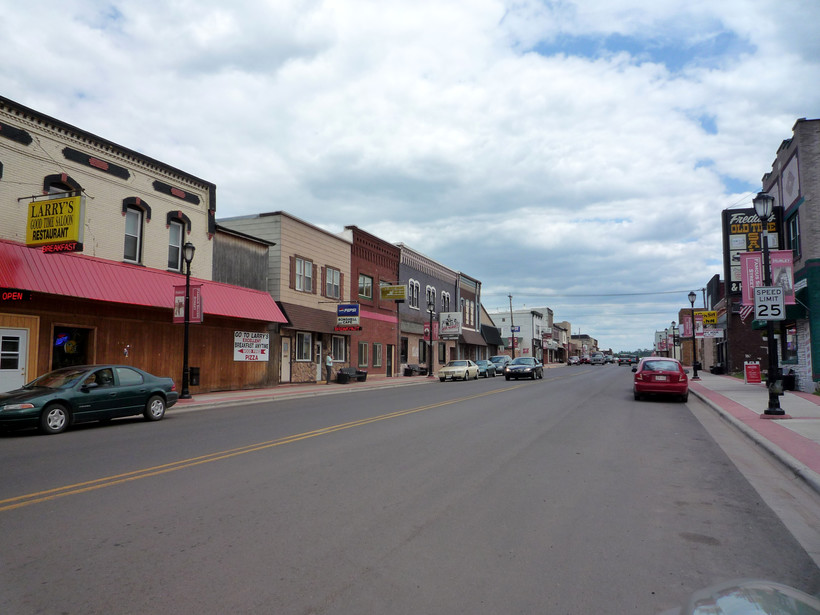 A street in downtown Hurley. The city's only grocery store closed last year.

For Rural Wisconsinites, Access To Food Can Be Difficult

The city of Hurley has been trying to bring in a grocery store since the last one closed a year ago. The loss of Super One Foods in the city’s downtown resulted in the loss of about 30 jobs. But Hurley Mayor Joe Pinardi said the problem runs deeper than that.

"Means you have to go to Ironwood, Michigan and spend your dollars in the other state if you want to eat," said Pinardi. "It’s $100,000 worth of sales tax revenue that’s not created in Wisconsin because of a grocery store not being there."

Pinardi said the city applied for a $500,000 grant, not once, but twice from the Wisconsin Economic Development Corporation. Iron County Development Zone’s Kelly Klein said it was seed money to encourage a developer in Michigan to invest $3.3 million in Hurley’s grocery store. But, WEDC informed the city in early April that they wouldn’t be receiving the grant.

"While Hurley made a strong case for the need for a grocery store in the community, those projects that have been selected for grant funding this round were able to demonstrate stronger project ties to the downtown within their communities and the potential for further investment in adjacent properties," said WEDC spokesman Mark Maley in a written statement.

WEDC received more than 30 applications requesting about $8.2 million from its Community Development Investment Grant program. The public-private job creating agency has $1.5 million in grants it can award this year. Iron County’s Klein said the developer is no longer pursuing plans for the store.

It’s one area among others in the state that could be considered a so-called food desert. The USDA defines food deserts as typically low-income areas where residents are far from a grocery store. Klein said that, in this case, the specific distance is not the issue.

"For Hurley residents, it’s probably not far between three and five miles to get to another store, but it’s a convenience factor," he said.

Mari Gallagher has her own research and consulting group that popularized the term "food desert." Gallagher agreed that distance is not always the biggest obstacle. It's the imbalance of food choices. She said rural areas are seeing dollar stores or gas stations doubling as the convenient place to pick up groceries.

"Sometimes the food there is cheap, but the nutritious food is not necessarily cheap and sometimes it’s not available," she said.

Gallagher said that can lead to a number of diet-related health issues.

Klein added that having a community grocery store is especially important to low-income women and children in the city of Hurley who now have fewer options for healthy food. University of Wisconsin-Extension Family Living Educator Andrea Newby works with the mobile food pantry in Iron County. She said they’ve been seeing more people who receive benefits through the Wisconsin, Infants and Children or WIC program since the store closed.

"The other (grocery store) is in Ironwood, which is in Michigan. So, WIC recipients can’t use their WIC dollars at that grocery store. It makes it challenging," Newby said.

Klein said a couple convenience stores offer items under the WIC program, "but, if they want a full grocery option, then they have to go elsewhere."

Elsewhere is around 30 miles south in Mercer or farther than that heading west to Ashland. Gallagher said there are a number of factors that can play a role in whether rural or urban areas qualify as food deserts, including market dynamics.

"Grocers go where grocers are already, so they just look at the market and think well, ‘It must not be a very good market for a grocery store because there aren’t any there,’" she said. Wisconsin Grocers Association President Brandon Scholz said that doesn’t hold true for every situation.

"Is that really then creating a food desert, or is that what that area can handle and a store can sustain from the customer base that is there?" said Scholz.

Gallagher said each community is unique and should be evaluated on a case-by-case basis, but she said access to transportation is often an issue.

"The people who are truly in rural areas can often be very stranded from these options and it takes a lot of gas money and time to go far out of the area," she said.

The Bay Area WIC Program serves Iron County and has a traveling clinic that visits Hurley once a month. A spokeswoman for the program declined to comment.

A spokeswoman for the Wisconsin Department of Health Services said they’re not aware of any Hurley residents having trouble getting to a store with an adequate selection of WIC items. According to information provided by the department, Hurley has three grocery stores that are authorized WIC vendors, including Cary Convenience Store, Z’s Cheese Haus and the Brite Spot.