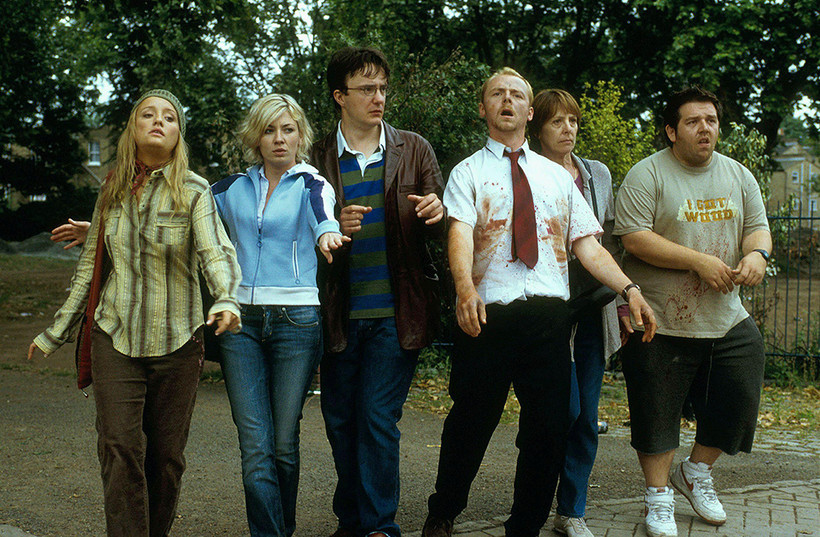 A rom-zom-com: How 'Shaun of the Dead' became a cult classic

In the early '90s, up and coming comedian, writer and actor Simon Pegg and wunderkind television director Edgar Wright were vaguely familiar with each other's work as they circled one another in the U.K. media world. The two would finally collaborate on the 1996 mini-series, "Asylum" — a dark comedy about an assortment of English residents trapped in a countryside asylum.

While they were working on "Asylum," the horror video game, Resident Evil, was released and the two of them discovered the other's mutual love for all things zombie. Both had grown up utterly fascinated by the George Romero zombie classic, "Night of the Living Dead," and its sequels, "Dawn of the Dead" and "Day of the Dead."

When the actor and director collaborated again for the groundbreaking U.K. slacker series, "Spaced" in 1999, they created an episode based on Pegg's character playing too much Resident Evil 2 and hallucinating to believe everyone around him was a zombie to be dispatched.

Wright and Pegg had so much fun creating the zombie sequences of that episode that on the way home from filming one day, the two of them decided to write a movie. Five years later, they would release their cult classic, "Shaun of the Dead."

"They both enjoyed shooting this scene very much. And then in the taxi ride away from the studio, Edgar said, 'You know, we should make a zombie movie.' So, they made a zombie movie," said Collis, who is the author of "You've Got Red on You: How Shaun of the Dead was Brought to Life."

Collis clarifies that this wasn't as simple as it sounds. Neither Wright nor Pegg had written a proper, studio-budgeted script before and faced financing hiccups and real-world hurdles including the tragedy of 9/11.

Collis explains that Wright and Pegg decided to make "Shaun of the Dead" not only as a homage — as the title pun alludes — to the Romero films, but to actually set their film in the same Romero-verse of zombie films, only in London. The pair followed the zombie rules Romero created and laid out in his "Dead" films.

"George Romero also established over time a set of rules to do with zombies. You know: if you get bitten by a zombie, you become a zombie; and so on and so forth," Collis explained. "And so what's interesting is, in a sense, you've got a strict framework, a strict set of rules."

Although they set out to make a comedic horror film, Collis states Wright and Pegg wanted it to be clear they weren't spoofing zombie films. They were instead making a serious zombie film – with state-of-the-art special effects and generally shocking scares – that mined the comedic elements from the slackers trying to survive it.

"They're very adamant that it's not a spoof of zombie films. What it's a spoof of is the kind of Richard Curtis-written, London-set romantic comedies like 'Four Weddings and a Funeral' and 'Notting Hill,'" Collis said. "I think they thought that it would be funny if they took the zombie aspect of it very seriously and clashed that with the romantic comedy genre."

The two creators jokingly referred to their film as a "rom-zom-com."

"Shaun of the Dead" was a semi-autographical account of both of their lives. Pegg stars as the titular Shaun whose reluctance to grow up angers his girlfriend, Liz (Kate Ashfield). This part of the story was somewhat of a filmed apology from Wright to his ex-girlfriend, Karen Beever, for not being a considerate partner. Beever also served as a producer on the film.

Making matters worse is Shaun works a dead-end job, only wants to hang out at the local pub and is hesitant to leave his best friend and flatmate, Ed, played by relative newcomer at the time, Nick Frost. This setup plays off the real-life era when Pegg and Frost lived together as they struggled to make it in the comedy/acting business.

The film follows Shaun and Ed's hilarious attempts to deal with the zombie apocalypse using only their slacker resources and Shaun's attempts to use the situation to win Liz back.

Like Romero before them, Wright and Pegg injected a sociopolitical theme into the film. If you watch the credits sequence and opening scenes carefully, you'll notice the zombie-like way people act at their jobs and move as they navigate London.

"The idea is that essentially the experience of living in a modern city is very similar to the experience of what it would be like in a zombie apocalypse anyway," Collis said. "That people just sort of shuffle around, don't pay much attention to each other. They can be quite isolating."

Wright delivers this theme with a cinematic masterstroke early in the film with a pair of one-shots. The first follows Pegg from his flat to the nearby bodega and back again brainlessly engaging with the shop owner and the people on the street. Wright recreates this exact same shot after the apocalypse has hit and Pegg never notices what has happened.

Collis argues Wright's directing flare is what keeps the film fresh and rewatchable all of these years later.

"It's something of a magical realist sequence," he said. "Things like that are absolutely crucial to the visual look of the film and the style of the film and the comedy of the film. And yes, I'm sure, is a big part why the film was a success. And, you know, even more so why ... it continues to be beloved over the years."

After the breakout status of "Shaun of the Dead," Wright and Pegg briefly considered a sequel. Instead they, along with Frost, collaborated on an unofficial trilogy of films venturing outside zombies with 2007's "Hot Fuzz" and 2013's "The World's End."

They did however earn the ultimate prize. After "Shaun of the Dead" reanimated interest in the Zombie film genre, Romero himself returned to his zombie-verse with 2005's "Land of the Dead" and invited Wright and Pegg to have cameos as the undead.

Collis said he feels the legacy of the film is that it still holds up today. He also argues that because the film is so dense with horror homages and jokes that it remains eminently rewatchable.

"You could watch it and be like, 'I've seen this film 117 times and I did not notice that little thing. I did not notice that little joke.' Or maybe that there are so many jokes that I did notice it on the seventh time of viewing," Collis said. "I think there are a lot of comedies from that period that have not aged well, and I actually think this gets more and more impressive with each passing year."

Host:
Doug Gordon
Guest(s):
Clark Collis
Producer(s):
Adam Friedrich
You've Got Red on You: How Shaun of the Dead Was Brought to Life