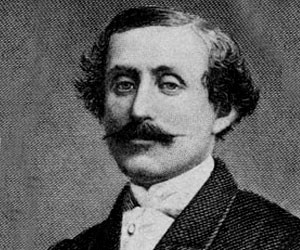 At the close of the American Civil War, after a perilous concert tour of the Northern states, New Orleans-born composer Louis Moreau Gottschalk left the country for Latin America.  He soon found himself in circumstances as difficult as those he had encountered at home, and he had to resort to an unusual trick in order to salvage a concert.  He wrote in his journal in Lima, Peru, on December 13, 1865:

My fears are realized on the subject of the locality, which the partial giving way of the theater has forced me to choose, in order to continue the series of my concerts which have been interrupted. It was in fact doubtful that the society of Lima would not be frightened at the idea of entering into the hall and gardens where every Sunday the veiled women and their friends had their rendezvous to give themselves up to the stormy Zamaenecas and other indigenous dances, which although very picturesque, are not such as prudent mothers permit their daughters to indulge in.

In the face of this difficulty there was only one means of overcoming it–raise the price of the tickets so high as to be only within the reach of those privileged by fortune. I put them up to two dollars....

One of my friends persuaded his sisters to sacrifice themselves. The rumor spread that the general and his family had taken twenty seats. In four hours the hall was full.  The first concert was not finished before the seats were already taken for a second....

At each of my concerts “Banjo,” “Murmurs eoliens,” “Charmes du foyer,” “Ojos criollos.” (The last has been encored three times) were called for again.

This evening I gave a seventh concert. I play for the first time an important arrangement which I have just written on Un Ballo in Maschera.

We are literally on the eve of a war with Spain, for the decree, the people say, is to be published tomorrow. The conflict between the latter and Chile renders imminent the hostile participation of Peru, the Spanish American republics being so strongly connected with each other by their common origin and their political institutions.