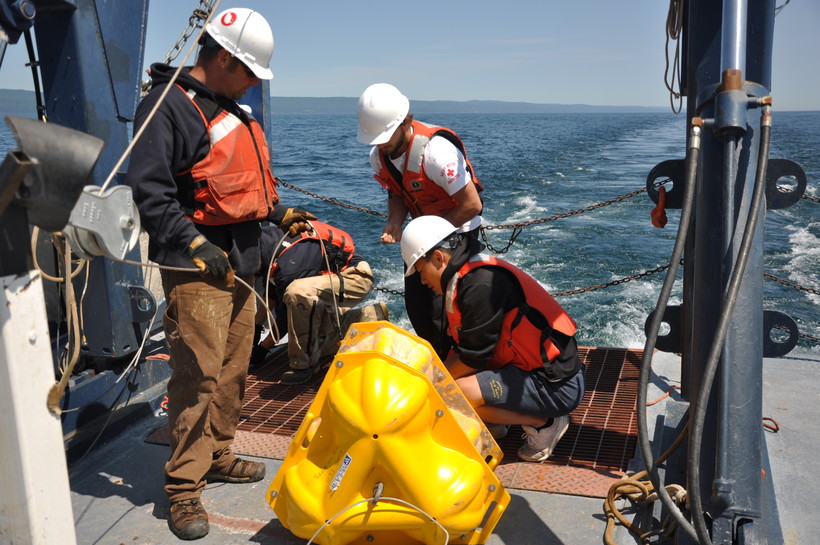 The Blue Heron crew works to deploy moorings as part of a four-year project to study internal waves on Lake Superior.

Researchers Study Waves Under The Waters Of Lake Superior

Researchers kicked off a four-year project this summer to study waves underneath the surface of Lake Superior. Scientists want to better understand the role so-called internal waves play in regard to lake temperature.

Internal waves form where warmer, surface water and colder, deep water within the lake mix, said Sam Kelly, principal investigator for the study and an assistant professor with the Large Lakes Observatory at the University of Minnesota-Duluth.

"These waves are generated when the wind blows over the lake and sort of pushes the surface water up against the coast, and that sort of pushes this interface up or down depending on the direction of the wind," he said.

The National Science Foundation has awarded around $1 million for the project. Kelly said the goal is to predict the strength of the waves, when they’re generated, how they spread and when they break.

"The bottom of the lake is always 4 degrees Celsius, so the temperature at the surface that we measure really depends on how much mixing goes on between the surface and the bottom of the lake," he said. "So you could have a very warm, very thin surface layer, or if you had a bunch of wind and it mixed up the colder, deeper water, you could have a relatively deep surface layer that’s much cooler."

"There’s currents associated with these waves, and so, if you can predict currents, you can create safer offshore structures," he said.

Kelly said they’ve put 10 moorings in the western arm of Lake Superior between Grand Marais, Minnesota, and Ontonagon, Michigan, that will collect data on temperature and currents. Preliminary findings are expected next year.