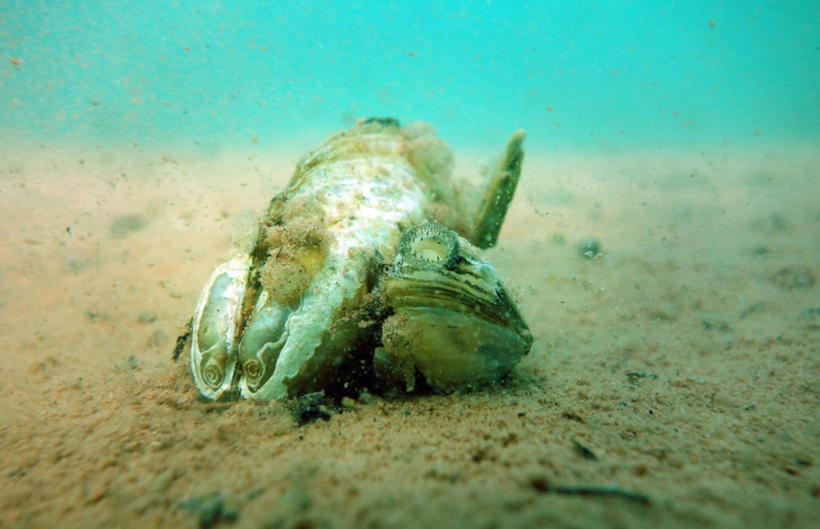 Invasive dreissenid mussels, or quagga mussel, attached to a native unionid mussel Pyganodon grandis in Quarry Bay of Stockton Island in the Apostle Islands National Lakeshore in Wisconsin on Aug. 2, 2017.

Invasive zebra and quagga mussels don’t appear to be very widespread in the Apostle Islands of Lake Superior. The preliminary findings are part of a two-year study to determine the extent of their numbers and where they originated.

The National Park Service and Environmental Protection Agency detected invasive mussels in the islands in 2015 and 2016, but the invaders have been spotted on fishing nets since 2011. Since then, the agencies began working together to increase detection in the area.

As part of that, Northland College research associate Toben Lafrancois said they conducted a survey of native and invasive mussels last summer. He said they found the distribution of invasive mussels around the islands and nearshore areas is very spread out.

"We found that there are zebra mussels on the Sevona wreck and near Sand Island in kind of really low densities," he said. "We found them in Red Cliff Bay and several bays around Stockton Island, but we did not find them on the Noquebay wreck or the Lucerne wreck. That’s kind of good news, and the low densities are also good news."

"What we were surprised about is that they weren’t supposed to be doing very well here, but it turns out that conditions seem to be fine for cultivating pretty large organisms. They seem pretty healthy, but they’re not very dense," said Lafrancois. "We have a really great opportunity to actually mitigate the population and try to monitor and remove by hand a lot of them that we’re finding near the islands." Dreissena polymorpha, or zebra mussel, attached to the wreckage of the Sevona off Sand Island in the Apostle Islands National Lakeshore in Wisconsin with freshwater sponge in foreground in Oct. 2017. Photo courtesy of T. Lafrancois

Colder temperatures in Lake Superior and lower amounts of nutrients and calcium are thought to provide poor habitat for the invasive mussels, which thrive in warmer waters.

Invasive mussels around the Apostle Islands are among 1,500 samples that have been collected from 70 water bodies across the Great Lakes except for Lake Ontario, said Mike McCartney, research assistant professor at the University of Minnesota, Twin Cities in the Minnesota Aquatic Invasive Species Research Center. McCartney said mussels have also been taken from Minnesota and Wisconsin inland lakes as researchers seek to determine their origins through genetic markers.

"We get that kind of information because we sequence the DNA across the whole genome of each individual mussel," said McCartney. "We do it in a way that’s quicker and faster than doing the entire genome of each mussel."

Even so, McCartney said it can take two to three weeks for computers at the University of Minnesota to crunch through the 6,000 genetic markers they want to identify. He said those markers will reveal which body of water the invasive mussels came from. That, in turn, will help resource managers target efforts to prevent further spread of the invasive species around the Apostle Islands.

"Then, we would lower the chance they get moved to other places in the lake," said McCartney. "We already know in that lake, in Superior, they’re barely making it. They’re really in a habitat that’s on the edge for them. Everything that we can do to limit further movement is going to help."

McCartney said they hope to determine whether the invasive mussels around the Apostle Islands originated in Lake Superior within the next month. He expects to publish their findings from the study sometime next spring.