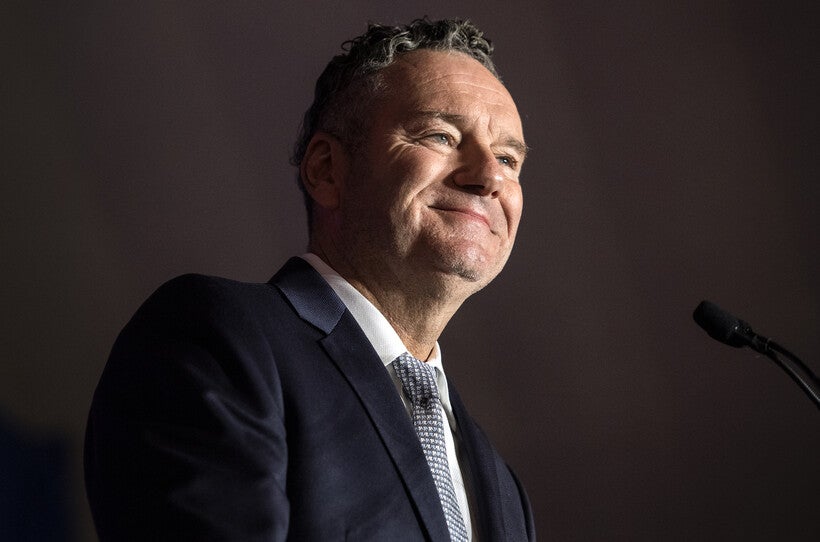 Tim Michels smiles at the crowd after winning the Republican primary for governor Tuesday, Aug. 9, 2022, in Waukesha, Wis. Angela Major/WPR

Michels said the state's largest school district would not get increased funding without 'significant' changes
By Shawn Johnson
Share:

Republican candidate for governor Tim Michels said Tuesday that he'd consider breaking up the Milwaukee Public Schools system if elected and would not increase funding to the district unless it makes major changes.

His comments represent another one of many issues where he's at odds with Democratic Gov. Tony Evers, who vetoed a bill earlier this year that would have broken up MPS.

Speaking to the Rotary Club of Milwaukee in a forum that was broadcast by WisconsinEye, Michels said reading scores at many schools showed MPS had failed students. If elected governor, he said he'd meet with Milwaukee Mayor Cavalier Johnson, Milwaukee County Executive David Crowley and leaders from MPS to discuss how to change the district.

Michels said something "significant" needed to change at MPS.

"We'll put it all on the table," Michels said. "If we have to break up MPS and start from scratch, we'll do that."

GOP lawmakers sent a bill to Evers' desk this past legislative session that would have broken up MPS into smaller districts. Evers vetoed the bill, writing at the time that Republicans had not shown evidence that it would help students.

In a written statement after Michels' forum, Evers campaign spokesperson Kayla Anderson said the governor had been doing the right thing for Milwaukee by investing in the city and its schools at the highest levels in decades.

"Instead of supporting parents, students, and teachers, Tim Michels wants to divide communities even further by breaking up neighborhood public schools in Milwaukee, without a plan to improve public education," Anderson said. "Wisconsinites don’t want Michels' radical and divisive brand of politics in their kids’ classrooms."

Michels also said he would prioritize reducing crime in Milwaukee, describing it to the Milwaukee Rotary Club Tuesday as an "attitude" change in government. He said that would encourage people to want to become police officers at a time when police have been under scrutiny.

"They're gonna be like, 'OK, now it's OK to become a cop again,'" Michels said. "And we will get more young men and women that want to serve in their community as law enforcement officers to do that."

But it's unclear how or whether Michels would fund additional police. When asked whether he'd support a plan that would let Milwaukee County raise its sales taxes to pay for local services, Michels was noncommittal.

"If I'm convinced that they are spending their money efficiently, then we will consider — keyword there is consider — more sales tax revenue at the county level," Michels said. "But I'm not just going to carte blanche say, 'Hey, here's more money for the municipal leaders.'"

Milwaukee County leaders have repeatedly called for a proposal that would let them increase local sales taxes to pay for services.

Evers included a plan in his last budget proposal that would have let all cities and counties with populations greater than 30,000 raise their sales taxes, but GOP lawmakers rejected it. Evers has also called for increasing state shared revenue to local governments in the next budget to help pay for services like police.

During Michels' remarks, he also made comments about the state's abortion ban that his campaign quickly walked back.

Wisconsin's pre-Civil War abortion ban makes performing an abortion a crime unless it's to save the life of a mother. Physicians who perform abortions under other circumstances could be charged with felonies.

It hasn't been an issue so far in Wisconsin, as the state's abortion clinics have stopped performing the procedure here. Democratic Attorney General Josh Kaul has said he won't enforce the ban.

Michels, who has a long anti-abortion record, said Tuesday that he would not be an "authoritarian" governor on the issue.

"I will never arrest a doctor," Michels said. "I'm a reasonable guy."

Michels campaign later clarified his remarks in written comments to The Associated Press.

"The DAs should enforce all laws," said campaign spokesperson Anna Kelly. "The governor is an executive. He’s not a DA or beat cop arresting anyone."