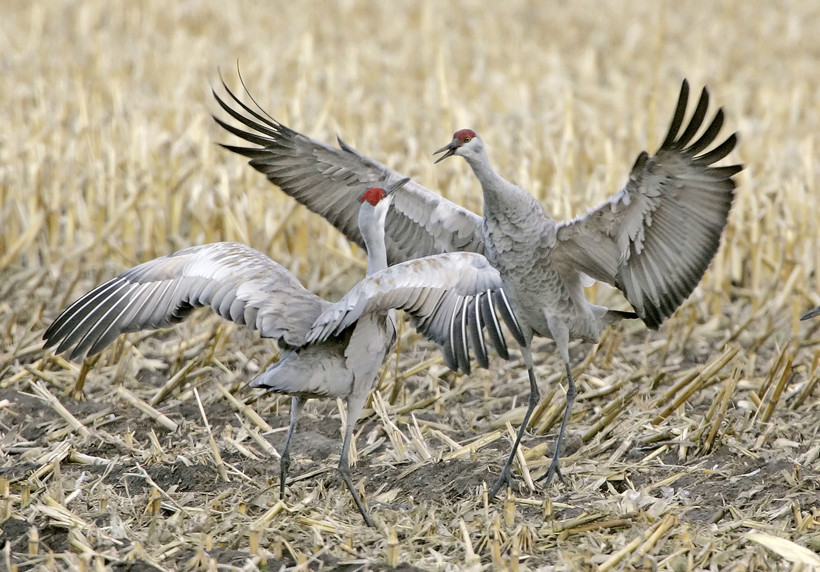 Sandhill cranes could be hunted in Wisconsin under a proposal unveiled by Republican state lawmakers on Wednesday.

The measure was part of a package of 13 bills from GOP lawmakers, which also included a renewed plan to authorize so-called "constitutional carry" in the state. Constitutional carry allows anyone over 18 to carry a concealed weapon without a license.

Hunting sandhill cranes has been a subject of discussion among hunters and conservationists for years. Though the birds are not currently on Wisconsin’s endangered and threatened species list, they have struggled in the past with population slumps in the area, particularly in the early 20th century. According to the state Department of Natural Resources, only 15 breeding pairs of the cranes were believed to remain in Wisconsin in the 1930s.

According to an annual survey by the International Crane Foundation, there are about 11,500 sandhill cranes in the state this year, up from about 6,000 in 1985, when the count first covered most of the state.

Speaking at a Capitol press conference on Wednesday morning, Sen. Mary Felzkowski, R-Irma, the sponsor of the bill, argued the crane population has grown enough in the state to justify hunting.

"We’ve done a great job in the state of Wisconsin of protecting (the cranes) and bringing our numbers back up where it’s no longer on the endangered species list," she said. "It’s time now to manage that resource, just as we do with all our other waterfowl and birds."

Some farmers across the state who support crane hunting have raised concerns about the birds destroying crops.

But some wildlife advocates, including the Wisconsin Society for Ornithology, say whooping cranes, which are endangered and have a population in Wisconsin, could be mistaken for sandhill cranes by hunters.

Gov. Tony Evers’ office didn’t immediately respond to a request for comment about whether he would sign the proposal.

Felzkowski is also the sponsor of the constitutional carry legislation, which she previously introduced in 2017. Under the plan, people would be able to carry concealed weapons without a license. The bill would also eliminate the state’s ban of carrying a firearm in police stations and secure mental health facilities, but would allow individual facilities to bar carrying a firearm on their premises.

"We’re here to empower law-abiding gun owners, to give them the rights to enact their freedoms that are given to them under the constitution," Felzkowski said at the press conference. "There are bad actors out there, but we’re not going to penalize the 95 percent of good actors for the ones that are bad."

Evers’ office also didn’t immediately comment on the constitutional carry bill or the remaining bills in the Republican package.

Other measures in the GOP hunting and fishing bill package would:

Supporters of the measures argue the plans will decrease red tape and encourage more participating in hunting in Wisconsin.

"Over the years, we’ve seen a slow but steady erosion of some of our state’s greatest outdoor traditions," said Senate Majority Leader Devin LeMahieu, R-Oostburg, at the press conference. "Through overregulation, burdensome rules and increasing permit costs, we’ve seen a decline in hunting, fishing and other outdoor sports in Wisconsin — but our sporting heritage is worth fighting for."

A 2018 report from the Wisconsin Policy Forum found the number of deer hunting licenses sold in Wisconsin dropped by roughly 6 percent in the last two decades.

Democratic lawmakers were quick to push back on the Republican proposals on Wednesday.

Rep. Nick Milroy, D-South Range, who serves on the Assembly sporting heritage committee and is co-chair of the Legislature’s sportsmen’s caucus, criticized Republicans for not including Democrats in the bill drafting process.

"It is apparent that the process of introducing these bills was motivated by partisan politics rather than a true desire to expand and enhance Wisconsin’s sporting heritage," Milroy said.

"Republicans are simply not listening to what sportsmen across Wisconsin have been asking for," the senators said in a prepared statement.

They also criticized Republicans’ involvement of Ted Nugent, the rocker, hunting advocate and controversial conservative figure who has come under fire for anti-Semitic comments on social media, at Tuesday’s event.

"Instead of taking their cues from out-of-state, far right 'celebrities' like Ted Nugent, Republicans should get their ideas from the real experts — the hunters, anglers and outdoor enthusiasts with the Wisconsin Conservation Congress," Smith and Wirch said.

At the Republican event, Nugent said he is "not speaking for Ted Nugent."

"I am speaking for those millions and millions of American families who pursue this lifestyle of hands-on conservation that literally is God’s work," he said. "The deer was made the perfect size for my arrow."