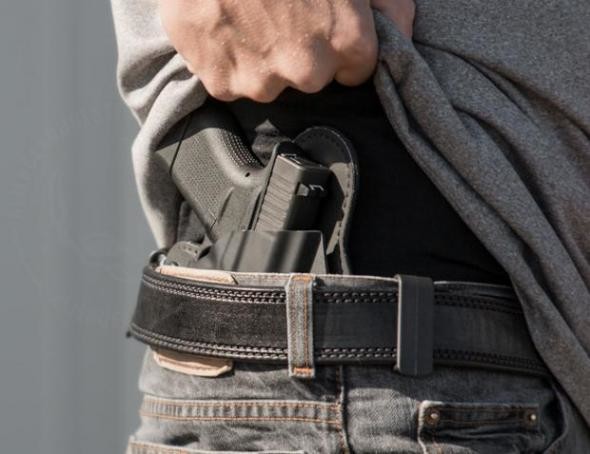 People could carry a concealed weapon without a permit in Wisconsin under a proposal released by Republican state lawmakers Tuesday.

State law already allows the open carry of a weapon without a permit.

"If you decide to throw on a coat, you should not be considered a criminal," said Sen. David Craig, R-Town of Vernon, one of the bill’s sponsors, in a prepared statement. "If you decide to carry a weapon to protect yourself or your family, you should be able to do so easily — without bureaucratic hurdles and without cost."

"In writing this bill, we found ambiguities in the law and 'gotcha' clauses which have tripped people up," said Rep. Mary Felzkowski, R-Irma, another sponsor of the bill. "The simplifications in this bill will help citizens more easily understand the law and avoid getting wrapped up in a court battle for something that should be lawful."

Amy Hunter, a spokeswoman for the National Rifle Association, agreed.

"What happens now is while they're carrying openly, if they put a coat on or if they need to put their firearm in their purse, you instantly become a criminal," Hunter said.

The proposal maintains the right for private businesses, schools and government buildings to disallow guns on their property so long as signs are posted prohibiting guns. But opponents of the bill say the proposed changes would compromise public safety.

"We don’t have a problem with the Second Amendment, but safety is our No. 1 concern," said Jennifer Rosen-Heinz, a volunteer with the Wisconsin chapter of Moms Demand Action for Gun Sense in America. "This would just allow people more ways to carry without having to go through the safety permitting."

Democratic lawmakers were quick to denounce the measure.

"Allowing anyone to carry a loaded, concealed firearm in public without any safety training or a simple background check is completely irresponsible," said Senate Minority Leader Jennifer Shilling, D-La Crosse, in a prepared statement.

"This will also create confusion and a lack of clarity on where weapons are allowed, which is troubling," Barca said in a prepared statement.

On the other side of the aisle, State Assembly Speaker Robin Vos, R-Rochester, expressed support.

"I’m generally supportive of it and will monitor public support as we determine our next steps," Vos said in a statement, noting Republicans in the Assembly still need to meet to discuss the issue.

A spokeswoman for Senate Majority Leader Scott Fitzgerald noted the senator is a "strong supporter of Second Amendment protections" and said Senate Republicans will also caucus to discuss the bill.

A spokesman for Gov. Scott Walker didn’t say if the governor supported or opposed the plan, but noted the governor’s history of working with the Legislature to "advance the rights of law-abiding citizens."