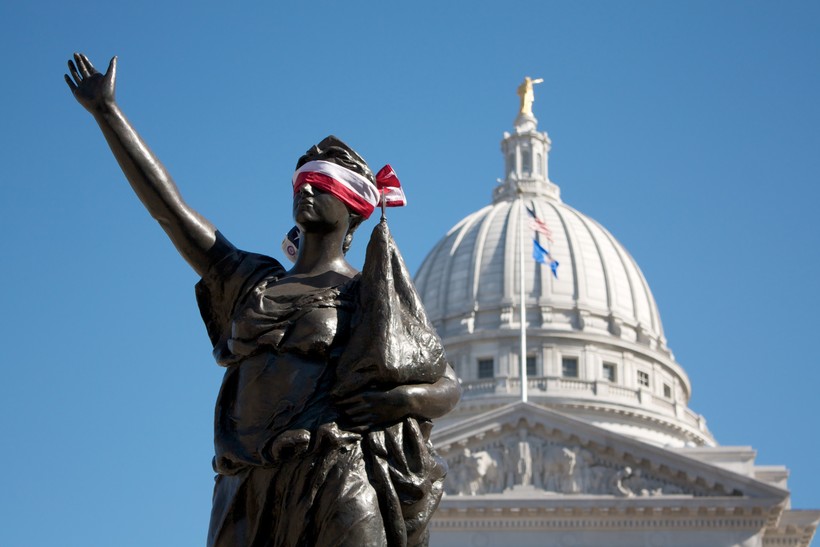 An American flag is fashioned into a blindfold and placed around the eyes of Forward, the statue on the stairway leading to the capitol from State Street. Rob Chandanais/ CC BY-NC-SA 2.0

Wisconsin is failing to protect the environment and conserve natural resources as power has shifted from state agencies to the Republican-controlled Legislature, according to a new report from a state conservation group.

Wisconsin’s Green Fire claims legislation, court rulings and politics have undermined efforts to address threats to the environment since 2011. The conservation group, whose members include former Department of Natural Resources staff, highlighted challenges with drinking water contamination by PFAS and nitrates, along with degradation of the state’s waterways.

"Today, instead of a robust balancing of public interests among stakeholders, a single committee of the legislature and a small number of groups representing industry, real-estate, and some agricultural interests now exercise a high level of influence over conservation and environmental programs, with direct implications for the health and welfare of Wisconsin citizens," Fred Clark, the group’s executive director, said in a statement.

Since Republicans gained control of the Legislature, the report said, legislative actions have weakened agency authority and shifted power from the executive branch to lawmakers. The report recommends multiple reforms that would limit the ability of the Legislature’s joint rules committee to block or suspend rules, as well as promote more local control and clarify the process for gubernatorial appointments.

Wisconsin’s Green Fire pointed to a series of changes they say have weakened agency authority to protect the environment, including a 2011 law, known as Act 21. The law limited agencies to only passing standards or regulations that are explicitly permitted or required under state law. The group also highlighted two laws in 2017, Act 39 and Act 57, that set deadlines for developing new rules and lowered the economic threshold for rules that can be passed without legislative approval.

The 2017 law, known as the REINS Act, restricted the ability of agencies to pass rules by requiring legislative approval of regulations that may cost more than $10 million over any two-year period. At the time of its passage, now Senate Majority Leader Devin LeMahieu, R-Oostburg, said the law gave "the legislature more power to hold unelected bureaucrats accountable." He pointed to the DNR’s 2010 phosphorus rule, which was estimated to cost communities and businesses $700 million each year, as an example of agencies exerting too much power.

Green Fire argues those changes and others have made the state’s rulemaking process longer, more expensive, and more likely to fail. The group adds those laws expanded power of the Legislature’s Joint Committee on Review of Administrative Rules, allowing a single committee to object to rules and suspend them indefinitely.

Clark told WPR that has led to the failure of policies like groundwater standards for PFAS and nitrate standards in areas sensitive to groundwater pollution. Both PFAS and nitrates pose serious health risks for those who are overexposed to contamination. Nitrates have been associated with birth defects, thyroid disease and colon cancer. PFAS has been linked to kidney and testicular cancers, thyroid disease and fertility issues.

The DNR abandoned its nitrate standards last year, citing time constraints with rulemaking. Clark added the Natural Resources Board passed limits this year for PFAS in drinking water and surface water, but failed to act on groundwater.

"This Natural Resources Board decided to do nothing, rejecting their own agency's recommendations and the overwhelming weight of citizen input," said Clark. "That's an example of a failure of policy that is going to cost citizens of this state for years to come."

The DNR’s website shows PFAS contamination has been identified at nearly 110 sites statewide, including communities like Eau Claire, Wausau, Madison, Milwaukee, Peshtigo and Campbell. Cities like Wausau are facing millions of dollars in costs to fund a water treatment system to remove the chemicals.

Growing concerns over water quality prompted Gov. Tony Evers to dub 2019 the "Year of Clean Drinking Water." Assembly Speaker Robin Vos, R-Rochester, also convened a task force that held meetings throughout the year that produced a bipartisan package of more than a dozen bills. Many of the bills passed the Assembly in 2020 with bipartisan support, but they died in the Senate at the onset of the COVID-19 pandemic.

Clark said "almost none" of those proposals have become law. However, Republican lawmakers have said all or part of eight of the 13 bills put forth by the task force have been addressed through legislation or the 2021-2023 state budget. They include increased funding for county conservation staff, funding for the well compensation grant program, and a pilot program to optimize the use of nitrogen on fields.

Green Fire also took issue with a series of laws that have limited the ability of local governments to set standards beyond state law, including changes to shoreland zoning, siting of frac sand mines and concentrated animal feeding operations or CAFOs. Wisconsin’s law that guides siting of livestock facilities took effect prior to 2011.

The Milwaukee Journal Sentinel reported this week that texts show Prehn, who was appointed by Walker, wanted to stay to maintain conservative control on the board. Prehn has rejected calls to step down after his term expired last year, blocking Evers’ appointee Sandy Naas from taking a seat. The Wisconsin Supreme Court ruled in June that Prehn can stay on the board after Attorney General Josh Kaul mounted a legal challenge seeking to remove him.

"Our conclusion is that the Natural Resources Board has really stopped working as a representative body and is being held captive by a majority of members that are beholden to special interests," said Clark.

Democrats have also sought to block appointments in the past. In 2001, the Democrat-controlled Senate refused to confirm former Republican Gov. Tommy Thompson’s re-appointment of UW Regent Gerard Randall. Randall remained on the board until 2007 despite an effort by Democratic Gov. Jim Doyle to rescind his appointment in 2003.

Green Fire wants lawmakers to limit the authority of the Legislature’s joint rules committee, so it can only make temporary 60-day objections to proposed rules. The group further suggests lawmakers — not the committee — should have sole authority to block agency regulations. The report also recommends expanding opportunity for public input and the deadline for approving rules.

Green Fire also wants lawmakers to remove the cap on the estimated economic impact of rules and consider costs that may be avoided through new regulations. Related to local control, the group called on the Legislature to allow counties to go beyond state standards for shoreland zoning, as well as permit local regulation of siting frac sand mines and CAFOs.

Clark said they also propose changes that would clarify a seat is immediately vacated at the end of an appointee’s term and allow the governor to make temporary appointments for up to 60 days without Senate confirmation. The group also wants the Senate to act within 60 days of an appointment.

As of this month, data obtained from Wisconsin's nonpartisan Legislative Reference Bureau shows at least 150 Evers appointees have not been confirmed. In January, LeMahieu told WisPolitics that the Senate would not take up remaining Evers appointments.

WPR reached out to representatives for Vos and LeMahieu, but they did not return requests for comment on the report. The co-chairs of the Legislature’s joint rule committee, Sen. Steve Nass and Rep. Adam Neylon, also did not immediately respond to requests for comment.