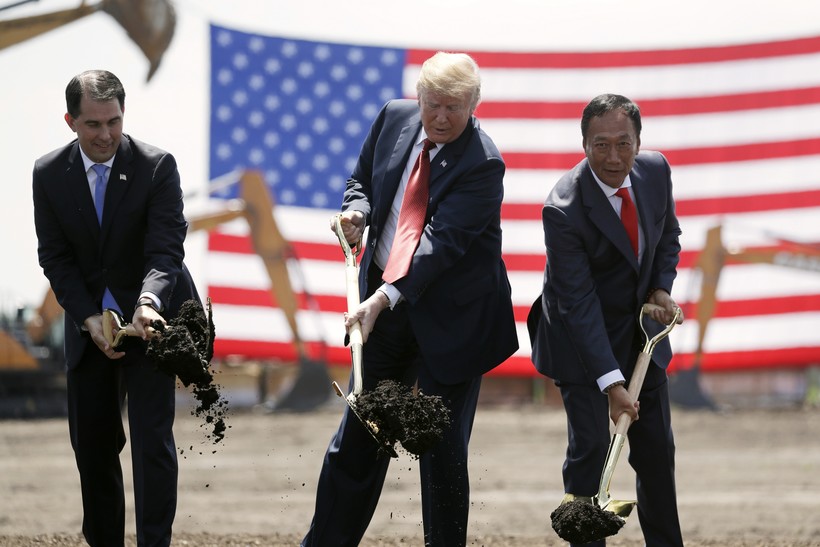 Tech giant Foxconn won't build televisions in Wisconsin, according to a report in Reuters, focusing instead on hiring engineers and researchers at its Mount Pleasant facility.

While Foxconn Technology Group said Wednesday it remained committed to the Wisconsin project and the jobs officials promised, the move would represent a dramatic about-face for the company whose promise to bring TV manufacturing to North America helped it secure billions of dollars in state tax incentives.

Reuters spoke to Louis Woo, a special assistant to Foxconn Chairman Terry Gou, who cited the steep costs of manufacturing TV screens in the United States.

Woo said it would be more profitable to make LCD panels in China and Japan, then ship them to Mexico for final assembly.

In a statement Wednesday, Foxconn didn't dispute the Reuters report, but said the company remained committed to Wisconsin.

"We remain committed to the Wisconn Valley Science and Technology Park project, the creation of 13,000 jobs and to our long-term investment in Wisconsin," the company said in an email. "As we have previously noted, the global market environment that existed when the project was first announced has changed. As our plans are driven by those of our customers, this has necessitated the adjustment of plans for all projects, including Wisconsin."

Woo told Reuters about three-quarters of Foxconn's eventual Wisconsin jobs would be in research, development and design.

"In Wisconsin we’re not building a factory," Woo told Reuters. "You can’t use a factory to view our Wisconsin investment."

The massive scale of the Foxconn project was a major selling point for former Republican Gov. Scott Walker, who boasted that once it was finally built, the Wisconsin plant would be the size of "11 Lambeau Fields."

"The administration is in regular, weekly communication with senior leadership at Foxconn," said Joel Brennan, Gov. Tony Evers' state Department of Administration secretary. "However, we were surprised to learn about this development."

Brennan said the Evers administration had been in contact with Foxconn since learning of the news and would continue to monitor the project to make sure the company delivers on its promises to the state.

"While some of the information reported today has been previously reported publicly, other details about the continuing evolution of this project will require further review and evaluation by our team," Brennan said.

"Every step of the way, Foxconn has overpromised and underdelivered," Hintz said in a statement. "We were promised manufacturing jobs. We were promised state of the art LCD production. We were promised a game-changing economic opportunity for our state. And now, it appears Foxconn is living up to their failed track record in the U.S. — leaving another state and community high and dry."

"We don’t blame Foxconn for altering plans in an ever-changing technology business," Vos and Fitzgerald said. "It’s also not surprising Foxconn would rethink building a manufacturing plant in Wisconsin under the Evers administration."

Evers had yet to issue a statement on the news. He had said recently he wanted to work with Foxconn to help the company "be the best corporate citizen possible."

The incentives package that Walker negotiated and signed in 2017 would have Wisconsin state government pay Foxconn up to about $3 billion in tax credits depending on the size of the plant it builds and the number of employees it hires. When all state and local incentives are added up, Wisconsin's Foxconn package totaled roughly $4.5 billion.

Walker responded to Wednesday's Reuters story in a brief tweet that referenced the parameters of the original Foxconn deal.

The statement said Foxconn reiterated to the group Wednesday that it's committed to creating 13,000 jobs and investing $10 billion in Racine County.

"They are evaluating exactly which type of TFT technology will be manufactured in Wisconsin but are proceeding with construction on related manufacturing, assembly and research facilities on the site in 2019," according to the statement.

Racine County, the county economic development corporation and Mount Pleasant officials said they understand Foxconn’s need to be nimble in responding to market changes to ensure the long-term success of their Wisconsin operations.

"We fully expect that Foxconn will meet its obligations to the state, county and village," the statement reads.

Milwaukee Mayor Tom Barrett said he saw the Reuters report and is disappointed the jobs Foxconn will create will be more research and development oriented.

"That doesn't bode well for those who are underserved in the city of Milwaukee," Barrett said. "This was sold to employ a lot of people, not just from Milwaukee, but there are a lot of unemployed and underemployed in the city of Racine as well, so that is very troubling."

Barrett hasn't yet talked to Foxconn representatives about the future of the company's North American headquarters in downtown Milwaukee. Foxconn announced plans last year to purchase a seven-story office building that will house an innovation center, incubators and venture capital activities.

"I think it will be a few days before we have an understanding as to what is truly what is happening," Barrett said. "My concern remains the taxpayers of this state. The state tax incentives will of course be scaled back, but you have massive tax incentives at the local level. There is a lot of money being spent and we truly want to have jobs."

In June, the Village of Mount Pleasant deemed more than 2,000 of acres of farmland and a few dozen homes to be blighted, allowing it to seize the property for what Foxconn said would become a manufacturing complex.

As of December, the village had 85 percent of the land it needed for the manufacturing complex.

The city of Racine hasn't responded to emails or phone calls for comment. Racine Mayor Cory Mason has said Foxconn could help bolster the city with the additional manufacturing jobs.