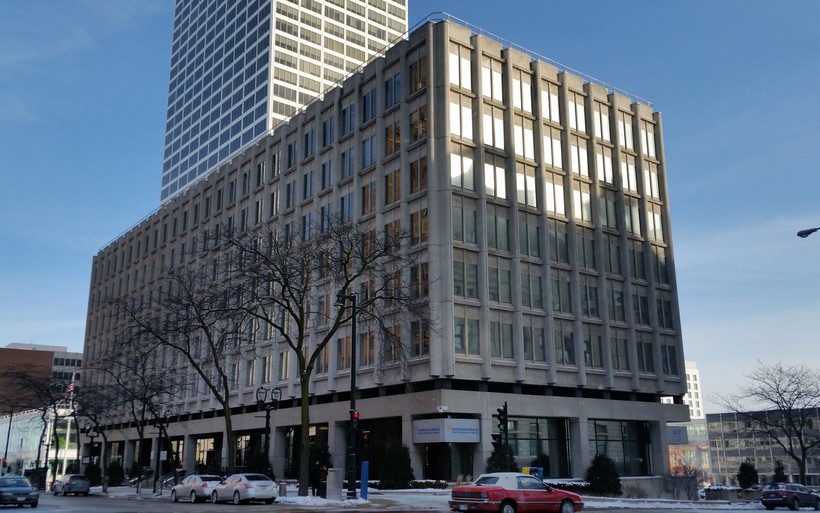 The downtown Milwaukee building, located at 611 E. Wisconsin Ave., Foxconn will use as a North American headquarters.

Foxconn Technology Group is setting up its North American headquarters in downtown Milwaukee with an eye toward attracting and retaining younger workers and harnessing innovation.

The new headquarters, called Foxconn Place, will house an innovation center, incubators, venture capital activities and more, Louis Woo, a Foxconn executive, said Tuesday during the announcement made in the new Northwestern Mutual Building near downtown.

Foxconn is building a factory in Racine County to make liquid crystal display panels for commercial and consumer uses, including televisions.

Foxconn's $10 billion, 13,000-employee complex will be built in Mount Pleasant but the company had yet to say where office headquarters will be located.

The location of the headquarters in Milwaukee is strategic, Woo said. The goal is for Foxconn Place to be a "magnet" to attract and retain talent from other states, and graduates from colleges and universities across the state.

As many as 600 people may be based at the site.

Before ending his remarks, Woo thanked Walker for his commitment to Wisconsin.

"Without him I would not be here today. He’s really the architect, the dominant figure, and also the person, the force behind all the reasons we’re here today," Woo said of Walker.

Foxconn’s purchase of a seven-story building in downtown Milwaukee from Northwestern Mutual is independent of our state deal. It goes beyond the $10 billion facility in Mount Pleasant & grows Foxconn’s footprint in WI. This new headquarters is WI’s Foxconn Bonus. #WIFoxconnBonus pic.twitter.com/8ng2bvGctR

Foxconn's Alan Yeung told reporters Foxconn may soon outgrow the Milwaukee building, but didn't elaborate why he thought so.

"We hope that it will not be sufficient in a few years," Yeung said.

Abele, a Democrat, and Northwestern Mutual CEO and Chairman John Schlifske applauded Foxconn's move into downtown Milwaukee because of the jobs and opportunities the headquarters will bring.

"We will do absolutely everything we can to make it a success," Abele said on behalf of the county's efforts.

"They're not being subsidized to buy this building downtown. They're going to create a lot more jobs down here," Abele said. "I don't think a lot of people in this city were thinking that the city would be directly benefiting as quickly as they are. I know they're talking about having staff in there potentially by March, which is pretty darn quick, so, good news."

Schlifske piggybacked on Abele's comments. "I can promise you, this is not the beginning of something little, but something very, very big,"

While Walker celebrated the new Foxconn headquarters, he also defended the cost-per-job in state subsidies for the company.

The Milwaukee Journal Sentinel reported this week that it will cost state taxpayers more than $200,000 for every job Foxconn creates at the Racine County factory.

The governor said Foxconn's move to locate the headquarters in Milwaukee shows the state's return on investment continues to grow.

State Rep. Dana Wachs, D-Eau Claire, a Democratic candidate for governor, said Walker has been fixated on Foxconn and needs to support businesses in every corner of the state.