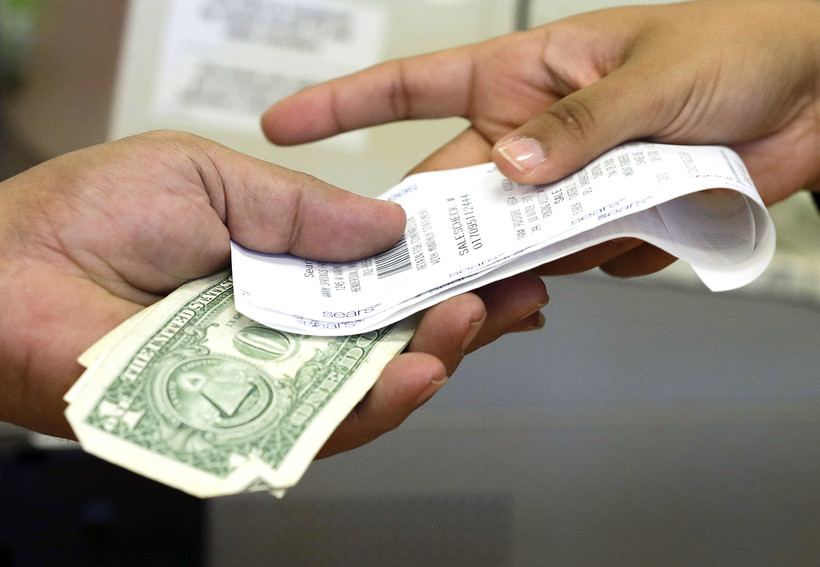 A cashier hands a customer his change and receipt during a transaction at a Sears store, in Henderson, Nev. Julie Jacobson/AP Photo

Counties might see millions more in losses from sales tax revenues than previously thought, according to the most recent estimates released from a research division of the Wisconsin Counties Association.

"With the information that's coming in now, it looks like there's a decent chance that things can be a little bit worse than what we thought," said Knapp.

April tax collections were down $870 million compared to the same month last year, according to the Wisconsin Legislative Fiscal Bureau. Preliminary data from the Wisconsin Department of Revenue showed retail sales tax receipts for clothing were down 46 percent along with a 38 percent decline for restaurants and bars. At the same time, online sales tax receipts grew by 49 percent.

Knapp said the counties that will be most impacted by the loss are those that receive a greater share of sales tax revenues from tourism, as well as those who rely more heavily on collections as part of their overall budget. A recent report from the Wisconsin Policy Forum found counties could be hit hardest by reduced spending during the coronavirus pandemic because they rely more on sales tax revenues than cities and villages.

Sauk County, which includes the Wisconsin Dells area, is among the counties expected to see the greatest declines with an estimated 20.6 percent drop in sales tax revenues. Dave Bretl, the county's interim administrative coordinator, said the county board will weigh how to deal with the projected $2 million shortfall.

"Which can mean cuts in terms of services and expenses or looking at utilizing reserves to soften some of that blow," said Bretl.

Bretl said the county budgeted for $9.8 million in sales tax revenues, which is roughly 10 percent of its $103 million budget. He said counties are already dealing with increased expenses in their response to the COVID-19 crisis, noting the funding shortfall will likely extend beyond this year.

"I'm not assuming that the economy is going to turn on a dime here and everything is going to open and everything's going to be back to usual because the businesses take time to ramp up and people are out of work and don't have money to spend, which generates sales tax," said Bretl.

"There's multiple tools that are available. Anything that ranges from obviously dipping into our fund reserve, which is what that's kind of there for, for those types of expenses," said Pabich. "Or, do we do similar things that the state's doing, let's say at the state or the university level, where they're looking at doing some type of furlough program in regards to make up some that difference?"

Pabich said the county board is meeting on Thursday to discuss COVID-19 impacts and its options.

Counties could receive funding from the state, which is expected to receive more than $2 billion in coronavirus relief through the federal CARES Act. But Knapp said that money wouldn't be able to go toward lost revenues — only costs incurred as part of the coronavirus response.

Congress is discussing a second round of coronavirus relief that could help replace lost revenues.