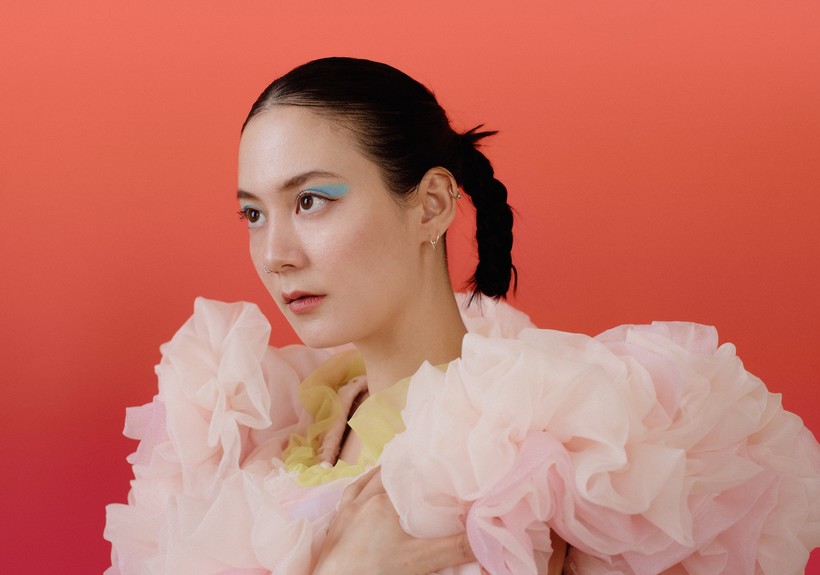 Japanese Breakfast frontwoman's memoir, 'Crying in H Mart,' is named for the grocery store where her mother used to shop
By Doug Gordon
Share:

Michelle Zauner is not only a literary star, she's a literal rock star. Her debut memoir, "Crying in H Mart" is a critically-acclaimed best seller. And when she isn't busy writing books, she's a singer and guitarist for her alternative pop band, Japanese Breakfast.

You may have caught Japanese Breakfast on the season 47 finale of "Saturday Night Live," on May 21. If you missed it, we've got you covered:

Zauner recently joined Wisconsin Public Radio's "BETA" to talk about her memoir, and the impact her mother's death had on her.

"My mom was a Korean woman, and she passed away in 2014 from a short battle with cancer. And I found myself going to H Mart after she died, as a way to connect with her memory and this culture that we shared," Zauner said.

Zauner's father is white, so she counted on her mother to share her Korean heritage with her. And while her mother didn't teach her how to cook, she raised Zauner to appreciate Korean food — most of which they bought at H Mart, a chain of Asian supermarkets that specializes in Korean groceries. The "H" stands for "han au reum" which roughly means "one arm full of groceries." The first H Mart opened in Woodside, New York in 1980. Today, there are almost 100 stores in the U.S.

As Zauner writes in her book: "I'll cry when I see a Korean grandmother eating seafood noodles in the food court, discarding shrimp heads and mussel shells onto the lid of her daughter's tin rice bowl."

"I think it's just such an intense, nostalgic feeling to be in this grocery store with ingredients that remind me of dishes that my mother made or ingredients that she adored and exposed me to," Zauner told "BETA."

Zauner described her relationship with her mother as "complicated" and admitted that it "could be tumultuous."

"But my mother was a homemaker, and I was an only child," she explained. "So we were very, very close and very much in each other's lives. But also, I was fiercely independent. And she also had a real vision for me that wasn't really going according to plan."

Her mother's vision was for Zauner to reach the height of her potential. That didn't include her daughter's desire to become a rock star.

After Zauner's mother died, her relationship with her father changed.

"Our grief just took us over in very different ways, and it was difficult to support and connect with one another for some time," she said.

Zauner points out that they were also in very different chapters in their lives. Zauner was 25, just starting her adult life. On the other hand, her father was at the point in his life where he was ready to retire with his wife and enjoy their life they had spent 30 years building together.

"And suddenly, we had to reconstruct what our next chapters were going to be in the wake of her loss," Zauner said.

Part of that reconstruction was learning about the woman Zauner's mother was when she wasn't being a parent or wife — leaving some of her true feelings and desires to herself, and for herself.

"I think that my mom was very impressive in that way," Zauner said. "She was very private and could be very stoic and withholding and mysterious in this way."

Zauner continued, "I think that's very true of many people. That there's this kind of hidden 10 percent that you keep from different people in your life."

After her mother died, Zauner tried to connect with her father and her aunt in an effort to discover the 10 percent they knew about her. She remembers her aunt telling her that her mother really missed Korea and that was why her mom behaved a certain way. Zauner initially had her doubts about that theory.

"But then it kind of dawned on me, maybe that was just something that my mom never said to us because she never wanted us to worry about her missing home," Zauner said. "But of course she did. And of course she would say that to her sister, who she could confide in, that she missed home."

"I think that it's a very kind of American concept to be yourself and be honest all the time that I think that sometimes withholding information or keeping secrets from people is actually the stronger and more powerful thing to do," she continued. "That, to me, is a more generous and loving gesture than being completely honest with your feelings all the time."

In addition to "Crying in H Mart," Zauner also considers most of Japanese Breakfast's debut album, "Psychopomp," to be a tribute to her mother.

"'In Heaven' is very much about that time in my life," she said. "Just how difficult it was to be a non-religious person coping with loss."

Orion Pictures is planning to make a feature film based on "Crying in H Mart." Zauner has already written the first draft and is working on the revisions. She's also supervising the soundtrack.

"I definitely don't want to create an original score. I'm so done with the story that I don't think I need to do every single thing involved with the story anymore," she said.

"'Garden State' was such a seminal coming-of-age film for people of my generation. And that soundtrack was such a big thing for people that I would love to have my version of that."