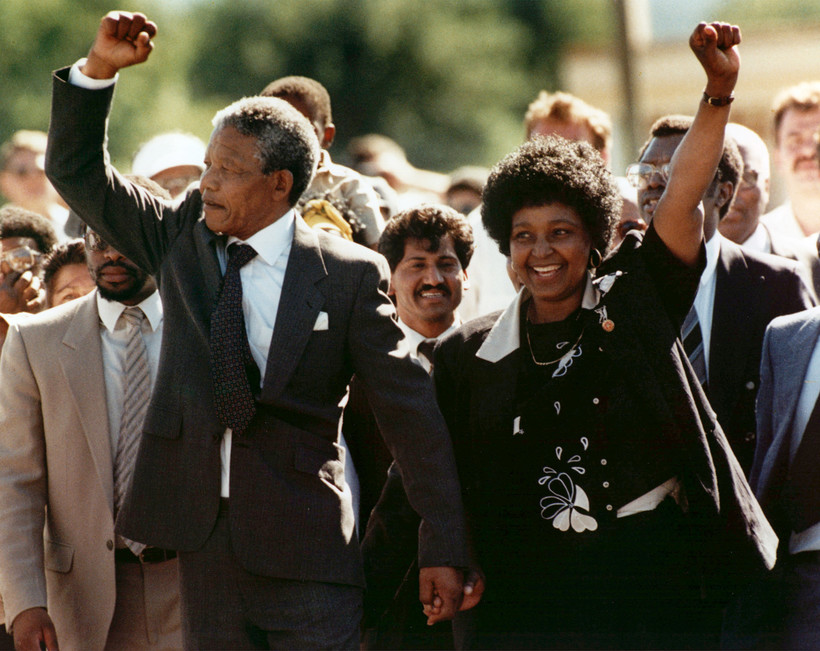 In this Feb. 11, 1990 file photo, Nelson Mandela and his wife, Winnie Madikizela-Mandela, raise clenched fists as they walk hand-in-hand upon his release from prison in Cape Town, South Africa. Six years later, speaking during divorce proceedings, Mandela said with convincing calm: "I'm determined to get rid of this marriage. It exists only on paper." It was the end of a powerful political partnership, and of a romance made all the more poignant by the way it fell apart. South Africa's President Jacob Zuma says, Thursday, Dec. 5, 2013, that Nelson Mandela has died. He was 95.

Since 1948, the white minority population of South Africa — mostly descendants of Dutch settlers — had ruled the country through a series of laws referred to as apartheid, which was a system of legal segregation and discrimination based on race. Many African organizations and individuals had been fighting against the racist system of apartheid for many years, including Mandela, a leader of the African National Congress. Convicted of trying to overthrow the government in 1962, he spent the next 27 years in prison. Freed in 1990 and after internal and international pressure brought an end to apartheid, Mandela went on to become the president of South Africa from 1994 to 1999.

As part of dismantling the apartheid system, Mandela was also hailed for his work helping the country peacefully move beyond its racist past. He subsequently won the Nobel Peace Prize in 1993, along with then-South African President Frederik Willem de Klerk "for their work for the peaceful termination of the apartheid regime, and for laying the foundations for a new democratic South Africa."

The documentary film, "Amandla!: A Revolution in Four-Part Harmony," examines how freedom songs were "used to mobilize and strengthen the community at large" during the anti-apartheid movement. These songs were sung when people were "facing bullets and dogs," according to journalist Peter Makarube.

"African people always made music. Nobody ever said, 'Well, I wrote this song in three minutes or I wrote it in three months. This is my song.' Because you start a song and someone backs you and you build up a song," he said.

Fellow journalist Gail Smith added that through the freedom songs, "there would be a bond and an immediate kind of acknowledgement of commonality and what we were about."

Performer Vusi Mahlasela was known as "The Voice" during the anti-apartheid movement, playing a large role in mobilizing people through his music. In the film, "Playing for Change: Peace through Music," he remarked that "For South Africans, I think, from the painful history that we come from, music was the only thing that gave us courage, to just give ourselves hope and get on.” A song that he often sings from that period is "When You Come Back." The lyrics include:

And I'll be the one who'll climb up the mountain

Reaching for the top of our Africa dais

While the poor women working for the lazy Lord sing

Here's a performance by Mahlasela of the song during the Live 8 concert in Johannesburg, South Africa, on July 2 2005:

People around the world celebrated the release of Mandela from prison, and they saw it as a sure sign that the days of apartheid were coming to a close. Through his life and work, Mandela embodied the work for racial justice and peace in South Africa, and he was celebrated in music from the movement as well.

Here's the song "Usilethela Uxolo (Nelson Mandela Brings Us Peace)" from the end of the film, "Amandla."

From the anti-apartheid movement to the civil rights movement in the U.S., to the "Singing Revolution" of Estonia, the music of the people — folk music — has played a prominent role in the struggle for freedom, justice and peace.