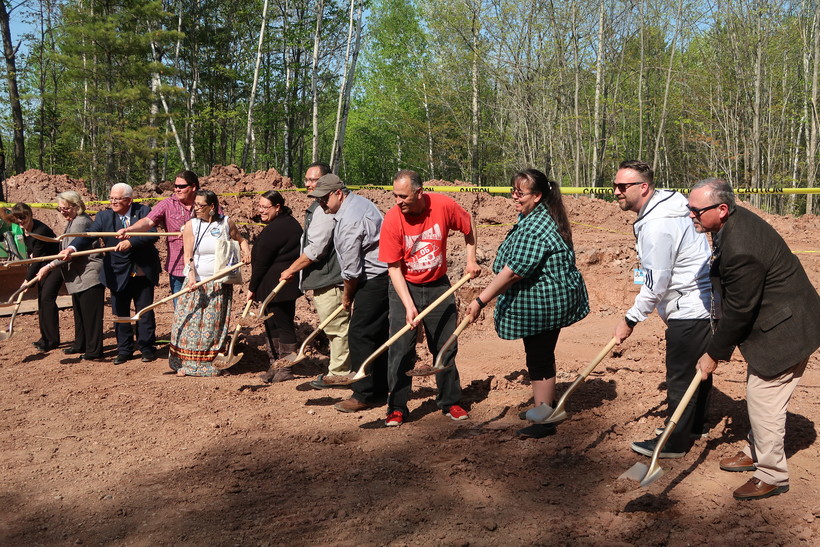 Representatives of Red Cliff and FirstNet, along with state and federal officials, break ground on a new 300-ft. cell tower on the tribe's reservation.
Danielle Kaeding/WPR

The Red Cliff Band of Lake Superior Chippewa broke ground Wednesday on a 300-foot cell tower within the tribe’s reservation. The tribe is the first sovereign nation in the United States to construct a tower as part of a multibillion-dollar effort to build a nationwide public safety broadband network for emergency services.

The tribe worked with AT&T and the First Responder Network Authority (FirstNet) on an agreement to construct the tower. FirstNet is an independent authority that was established by Congress in 2012. It will provide around $6.5 billion in initial funding to build a nationwide public safety broadband network to improve emergency communications.

The Red Cliff tribe and communities on the tip of northern Wisconsin have experienced challenges with adequate communication.

Lacking cell coverage was highlighted in the death of a Loyal family last summer. Eric Fryman and his three young children died while kayaking on Lake Superior. Fryman’s wife, Cari Mews-Fryman, who survived, had made calls and texts for help that went unanswered for hours.

"Everybody was sick to our stomachs last year when that happened because we were well into the process. You just sit down and you say, 'God, if we could have only done this a month ago,'" said Rick Peterson, Red Cliff tribal chairman. "But, our hearts and prayers go out to that family, and they’ll always be remembered, and we’ll always have them in our thoughts." Red Cliff’s chairman said the cell tower will help avert tragedy and expand coverage. Tribal, state and federal officials observed a moment of silence during the groundbreaking ceremony on Wednesday to remember the lives that have been lost and those that may be saved through improved service in the region.

Paul Patrick, tribal liaison and member of the FirstNet board, said the Red Cliff tribe is the first to reach an agreement and break ground on a cell tower with the independent authority.

"There are people who come into this remote and rural area and they need communications and they don’t have it. But, they all have this with them — a device," he said.

Jim Jermain, regional vice president of external affairs with AT&T, said the company has worked with public safety stakeholders to identify and improve service where emergency communication is needed in Wisconsin. He said AT&T has invested about $700 million across the state over the last three years in locations like Red Cliff.

"To constantly, not only improve our coverage, but also increase capacity for our customers," said Jermain.

AT&T is expected to invest around $40 billion to implement the public safety network, according to FirstNet. A dedicated radio band has been licensed to FirstNet that will be used by first responders for emergency communications. The project is the culmination of around 15 years of work to bring a cell tower to the reservation, said the tribe's IT director Theron Rutyna.

He said around 20 percent of the Red Cliff reservation currently has cell phone coverage. Once the tower is operational, it’s expected to bring cell service to about 80 percent of the reservation, as well as to parts of surrounding communities and the Apostle Islands on Lake Superior.

"Most people don’t carry radios in this region, so there’s a big blind spot on the lake where we can’t talk to people and they can’t talk to us," said Nicholas Sawyer, officer in charge of the U.S. Coast Guard station in Bayfield. "Unfortunately, it leads to a lot of search and rescue."

Sawyer said they had about 50 search and rescue calls last year for overdue anglers or people in distress on the lake. Several of those cases involved lack of communication, he said. He hopes the cell tower will lead to better outcomes and faster response in emergencies.

Johanna Wilson, an emergency medical technician with the volunteer Red Cliff Ambulance Service, said first responders rely on radios to communicate. She said that leads to congestion and cross-talk.

"We’re doing the best we can (to limit that), but we still need to be able to communicate so we can provide the best services to our people," she said.

Janet Sievert with the Office of Native Affairs and Policy at the Federal Communications Commission said the agency is thrilled to see the project improve communication on tribal lands.

"We know how important this is for economic development and education and the thriving of the tribes," she said.

The tribe’s IT director said up to five providers may be able to co-locate on the tower. The tribe hopes to complete construction on the tower by this winter.