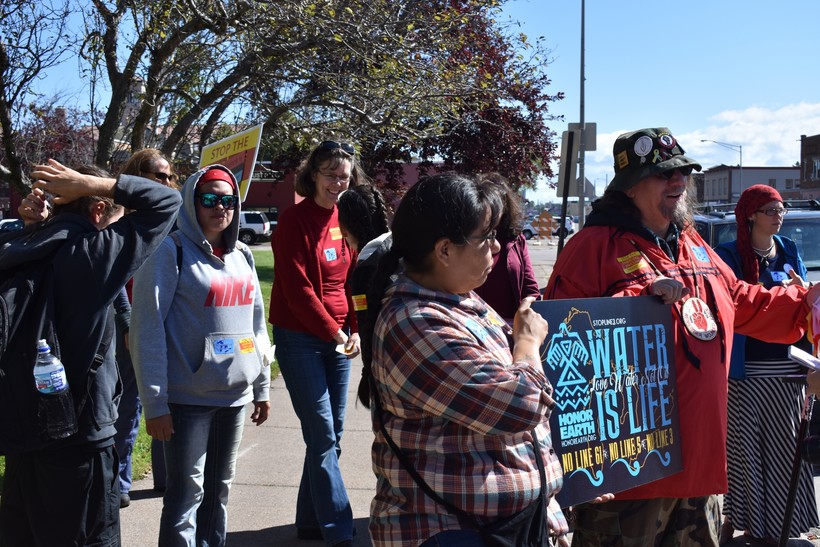 A group of protesters rally against Line 3 outside of the Douglas County Courthouse on Friday.

People rallied outside the Douglas County Courthouse in Superior on Friday against Enbridge Energy’s Line 3 replacement project. They also gathered to show their support for five people who have been charged with trespassing at a site where the company is replacing a 12.5-mile segment of its aging pipeline.

A woman chanted "love water, not oil" as cars drove by the busy intersection in Superior. Some drivers honked in support. Around 30 people turned out to rally against the Line 3 pipeline, which carries up to 390,000 barrels of oil per day from Canada to Enbridge’s terminal in Superior.

"I would like to see there be no pipelines," said Korii Northrup, tribal member with the Fond du Lac Band of Lake Superior Chippewa. "I would like there to be no more threats upon our drinking water because that’s life. Why would you threaten life?"

Northrup said Enbridge hasn’t been transparent about their plans for the pipeline by calling it a replacement project. Enbridge is abandoning the original Line 3 and replacing it with a larger pipe that would follow the same corridor until Clearbrook, Minnesota. The pipeline would then deviate south and east to Superior under Enbridge's preferred route. Once finished, the pipeline is expected to nearly double its capacity.

Others from Minnesota and Michigan made a day trip to Superior to support protestors and clean water. They say such pipeline projects are a step in the wrong direction and support an industry that should be transitioning away from fossil fuels. 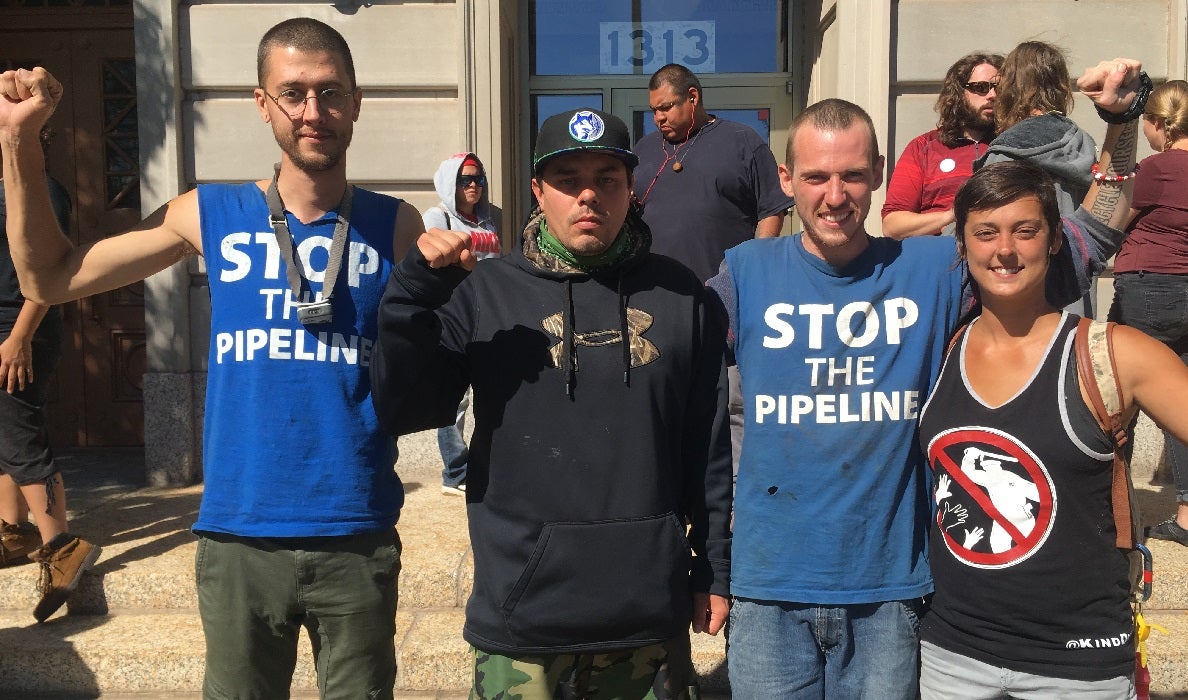 Pictured from left to right, Chase Wetzel, Onzie Snowden, Joseph Ryan and Amber Duvall, who are four of five people charged with trespassing after being arrested Thursday at a construction site south of Superior for Enbridge Energy's Line 3 replacement. Danielle Kaeding/WPR

Amber Duvall was among those arrested Thursday at Enbridge’s construction site south of Superior and then charged. Duvall, who is from St. Louis, Missouri, said she works with a group called Earth Defense Coalition.

"We’re up here representing some of the things that we do down there," she said. "Heard the call from the folks up here, found out there were more pipelines ripping through indigenous land and came to help out where we could."

Onzie Snowden, a member of the Leech Lake Band of Ojibwe, was also arrested and charged with trespassing this week. He said tribal members have the right to protect their treaty rights to hunt, fish and gather.

"One thing that the pipeline will do will destroy that," he said. "Wild rice is very unique to this part of the world. It’s nowhere else. That’s one of the things that I want to protect the most, and that’s why I do what I do."

Onzie has also been charged with obstructing/resisting an arrest and disorderly conduct.

"The pipeline will have a safer pipeline, which will help us enhance protecting our communities and the environment," she said.

"But, at the same time, we can’t have trespassing or unlawful actions or vandalism occurring on the construction site," she said. "It not only puts those individuals themselves at harm, but also our people, our workers and the environment itself."

The International Union of Operating Engineers has voiced its support for Enbridge, urging protesters to refrain from trespassing on the site and vandalizing equipment.

Construction of the 12.5 -mile segment of Line 3 in Wisconsin is on track to be finished by mid-November.

Snowden, Duvall, Chase Wetzel, Joseph Ryan and Dallon White made initial court appearances Friday. All except White are free on signature bonds and have been ordered to have no contact with Enbridge, company property, employees or operations. A status conference for the five has been set for early November.

Correction: A previous version of this story said the replacement pipeline would follow the same route as the existing Line 3. The story has been updated.