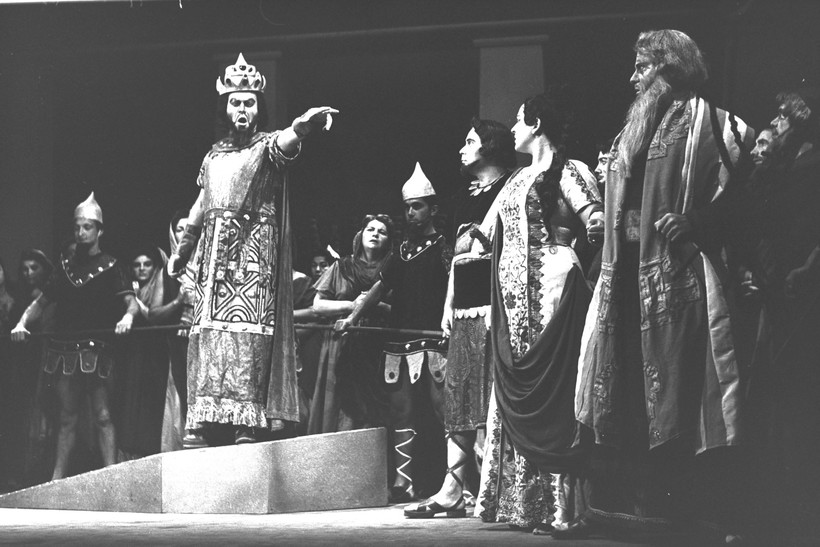 "With this opera it is fair to say my artistic career began."  So wrote Giuseppi Verdi of Nabucco, a masterpiece that also did much to launch his reputation as a political rabble-rouser.

The opera is based on the story of Nebuchadnezzar--given the more musical name Nabucco--who defeats the Jews at Jerusalem and has them carried off to Babylon as captives. It includes prayers by practically every character, a mad scene, warlike choruses and laments, and a dead march as the Jews are nearly executed.

The story had political punch.  In the 1840's Austria controlled much of Italy, and a story about Jews in captivity was bound to be taken as a parallel to 19th century Italy. But on musical terms alone Nabucco was so talked about during rehearsals that it was already a success before the curtain came up on opening night. When the debut came at La Scala in Milan on March 9th, 1842, Nabucco lived up to its reputation and then some.  The audience was so vociferous in their response to Act I that at first Verdi suspected that they were being insincere.

In Act III came a clarion call for freedom, the Chorus of the Hebrew Slaves.  It had a simple tune sung by all the massed voices of the chorus--a tune anyone could sing--and the audience demanded that it be repeated.  The police patrolling the opera house grew uneasy.  Repeats were against the law because of the danger that they would spark demonstrations against the Austrian officials and nobility looking down from their box seats. The police were no doubt relieved that Nabucco premiered late in the schedule so that there was time for only eight performances before the season ended.

If so, their relief was short-lived.  Because when Nabucco reopened in the autumn it had 57 performances--a record for one season--and it's said that the Chorus of the Hebrew Slaves was repeated at every one of them.