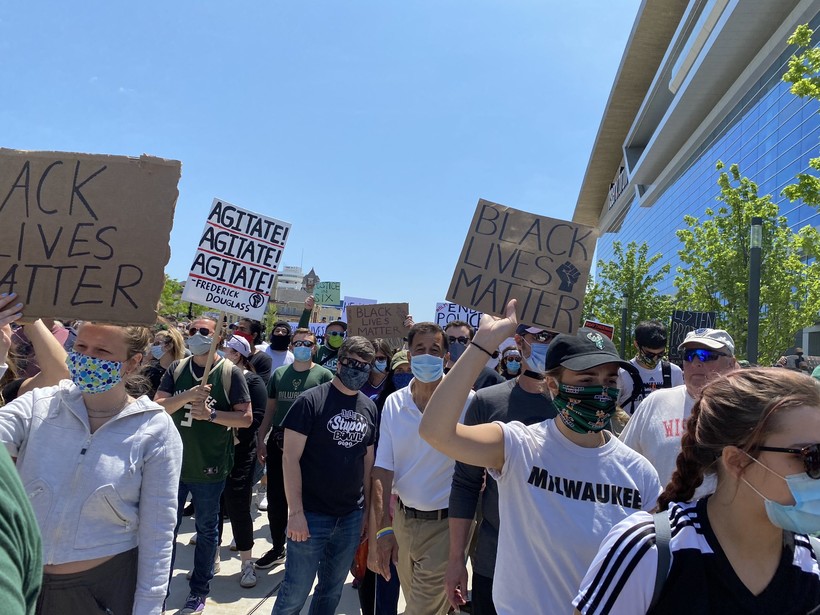 Protesters walk at the march and rally that the Milwaukee Bucks organized at the Fiserv Forum on Sunday afternoon, June 7, 2020. Corrinne Hess/WPR

Black Lives Matter protesters across Milwaukee and around the nation are calling for changes to the criminal justice system, including limiting where police officers can live.

But those calls come four years after the Wisconsin Supreme Court upheld a statewide ban on police residency requirements in Wisconsin.

Republican lawmakers created the ban in 2013. By that time, most municipalities had already eliminated such rules. Residency rules remained in place for three more years in Milwaukee, as leaders fought — but ultimately lost at the Supreme Court — to keep officers living in the city.

Community activists in Milwaukee say having city police living in nearby suburbs creates an even wider disconnect between officers and the communities they serve.

"That’s where the accountability starts," said Khalil Coleman, a Milwaukee activist and one of the leaders of the recent Black Lives Matter protests.

Data from around the state shows it's typical for officers to live outside the municipalities they serve, both in Milwaukee and in other Wisconsin cities.

In June, WisContext and WPR reached out to eight Wisconsin cities to request data about the residency status of their police officers. Those cities — Beloit, Green Bay, Kenosha, Madison, Milwaukee, Racine, Waukesha and Wausau — are spread geographically across the state and are home to larger non-white communities relative to their total populations than the state as a whole.

Milwaukee has the highest proportion of officers living within city limits. According to the city’s Department of Employee relations, 925 officers live outside of city limits — about 50 percent — while 911 live in Milwaukee.

In Waukesha, just west of Milwaukee, the number of officers living within city limits is at 26 percent, according to data shared by the city.

Racine has the lowest number of police officers living within city limits at 15.6 percent, according to data shared by the city.

The ease of access to residency data varied considerably, largely related to concerns over the confidentiality of officers’ private information and varied record-keeping practices.

"If you live in the community where you police, you are going to do things a little bit different," Coleman said during a Milwaukee Press Club virtual luncheon on June 29. "We need people from our community that walks with us, talks with us, shops with us, goes to schools with us, so we can have that accountability with them."

Indalecio de Jesus Valentin, a spokesman for The People’s Movement in Milwaukee, said the group wants officers working in the central city to be from central city zip codes, which include 53205, 53206, 53204 and 53215.

"We have seen and heard far too many white cops come from privileged backgrounds refer to inner city citizens as a 'threat' or 'ghetto' because of the ethnic backgrounds and different upbringings that these officers have," Valentin said. "It’s truly a source of inner racism."

Milwaukee Mayor Tom Barrett and the Common Council argued that removing the residency rule for nearly 2,000 police officers would hurt the city’s economy. The city also argued employees who lived in Milwaukee had "better knowledge of neighborhoods and enhanced relationships with residents," according to a 2016 lawsuit.

Milwaukee’s police union filed a lawsuit, which eventually reached the State Supreme Court in 2016, which ruled in favor of the union.

Four years later, Barrett still believes police and firefighters should live in the city the work in. Barrett said with both departments making up such a significant portion of the city’s budget, employees should pay property taxes and spend money where they are paid.

This year, the Milwaukee Police Department accounts for 44.5 percent of the city of Milwaukee’s general fund budget. 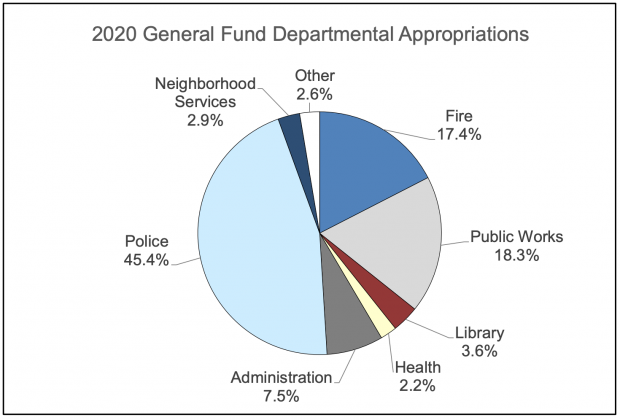 There have been calls by activists to "defund" the department by spending less taxpayer money on it, and instead spending the money on schools, health care and non-profit programs in the central city.

The Milwaukee Common Council is also considering reducing the department’s budget by 10 percent, or about $30 million, in 2021 to reallocate the money to social programs.

'We Have To Operate As A Community'

Lt. Gov. Mandela Barnes said he thinks the fact that many police officers aren’t willing to live among the communities they serve signals a big problem, particularly in urban areas.

"A lot of them talk about the school system. Well, a lot of the people they come into contact with are people who have been through the Milwaukee public school system," Barnes said. "We have to operate as a community. I think people would think twice about their actions if they made the conscious decision to be part of the community."

Milwaukee Police Chief Alfonso Morales said he would prefer if his officers lived within city limits. Morales grew up in Milwaukee and still lives on the city’s south side.

But he said he doesn’t make that decision.

Dale Bormann, Jr. heads the powerful Milwaukee Police Association. Before being elected president this year, he served as vice president. Both are full-time jobs.

Bormann has been with the Milwaukee Police Department since 1966, and his last job on the street was as a detective. Bormann, who lives on Milwaukee's north side, said he never considered moving out of the city when the residency rule was lifted four years ago, but he understands that many officers move to the suburbs because of the schools.

Bormann said lifting the residency requirement has made it easier to recruit officers.

"That’s nice to see," Bormann said. "And it’s also nice that some officers still chose to live in the city."

Bormann said the majority of officers hired in the last four years don’t live in the city, and it’s because of their children. That means the younger officers, who are out patrolling the streets, don’t live in Milwaukee.

But Bormann said he doesn’t believe it has hurt community relations. Instead, he said, it has helped with longevity in the department.

"It was very hard for the officers who were working here, and they had to make the decision if they were going to stick around, or go to a different city (for their kids)," Bormann said.

Editor's note: This reporting is the product of a collaboration between WPR and WisContext. WisContext's Will Cushman contributed reporting to this story. His story, published on WisContext can be found here: www.wiscontext.org/many-police-officers-wisconsin-live-outside-cities-where-they-serve.

Related Links:
WisContext: Many Police Officers In Wisconsin Live Outside The Cities Where They Serve