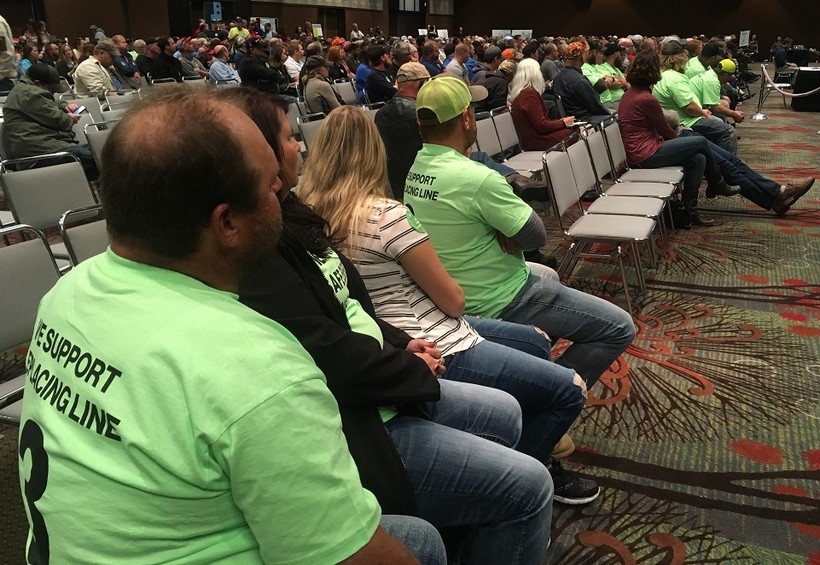 Enbridge Energy’s plan to replace its aging Line 3 pipeline drew hundreds of people to public hearings on the project in Duluth this week.

Line 3 carries up to 390,000 barrels of oil per day from Canada to Enbridge’s terminal in Superior. Enbridge officials say replacing the 1960s-era pipeline will increase safety and nearly double its capacity.

Prior to the hearing, Tania Aubad with the Mille Lacs Band of Ojibwe rallied against the pipeline with around 75 protesters in Duluth’s Minnesota Plaza.

"They’re on treaty territory lands and we do not recognize them," she said. "They are trespassing on what’s Native lands."

If built, Aubad argued the project may create jobs in the short term, but she said few would remain once the pipeline has been completed.

Others voiced support for the project at the hearing, including engineer and operator Brent Kenville of Superior, who is a member of the International Union of Operating Engineers Local 49.

"This line in particular keeps me at home instead of traveling away from my family," he said. "I just came back from Ohio working for six months, so I’ve been away from them for a while. That’s why I support this line, because I want to be close to home."

At one point, supporters of the pipeline chanted "U-S-A," while opponents shouted "Shut it down." The evening hearing at the Duluth Entertainment Convention Center was marked by one interruption after another despite pleas from Minnesota Administrative Law Judge Ann O’Reilly.

"We’ve gotten through 13 hearings without this baloney," she said. "Now, stop it."

"I also think it’s ridiculous to be putting a line this close to Lake Superior or any of the Great Lakes," she said. "Anything in the Great Lakes watershed is a very dangerous proposition."

But, Rick Schultz of Deer River, Minnesota, supports the project. The operator and engineer said working on pipelines has been his livelihood.

"They’re worried about a break. Well, let’s just put another one in there and eliminate the problem," he said.

Public comments on the project will be accepted by the Minnesota Public Utilities Commission through Wednesday, Nov. 22. Minnesota regulators won’t make a final decision on the project until next April.