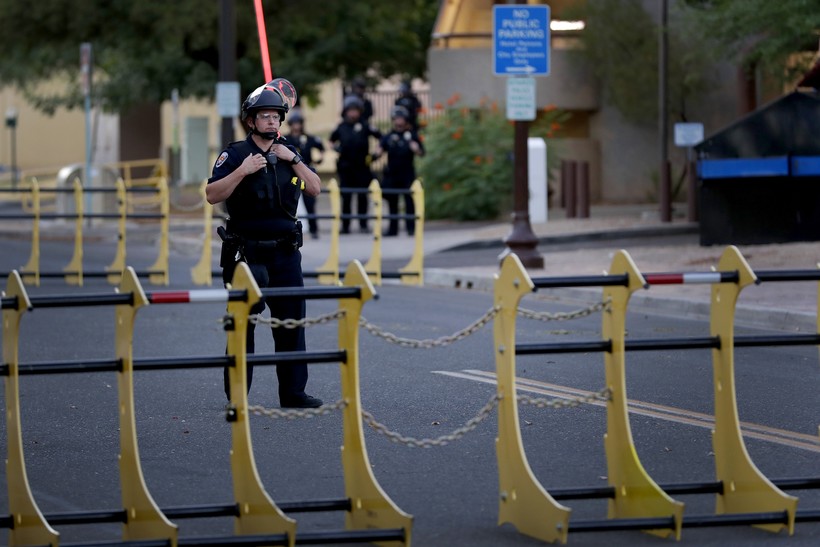 A bipartisan group tasked with proposing changes to Wisconsin laws on policing has released 18 recommendations, including limiting use of choke holds and creating new reporting requirements for use of force.

The group, which included two state lawmakers and 17 representatives from law enforcement and community organizations, is part of a larger legislative task force on racial disparities and policing. The task force was created last summer in the wake of widespread unrest following the killing of George Floyd in Minneapolis and severe injury of Jacob Blake in Kenosha.

In a prepared statement Wednesday, task force co-chair Rep. Shelia Stubbs, D-Madison, said the goal is to "end racial disparities that exist at every age and in every aspect of a person’s life across the State of Wisconsin."

"Devastating instances of police violence highlighted the need to reform our policing system," Stubbs said. "As a legislator, and as a Black mother, I could not stand by as these events tarnished the relationship between the community, and law enforcement."

The task force’s recommendations address use of force, police oversight and accountability and officer training. Also included are proposals for expanding community engagement. Some proposals, like a plan to create a statewide standard for use of force, are similar to previous proposals from Gov. Tony Evers. Other plans, like the group’s recommendation to limit choke holds, doesn’t go as far as Evers’ plan.

The governor’s proposal would have banned choke holds entirely. The group’s recommendations call for limiting choke holds to life-threatening situations or for officers’ self-defense.

Assembly Majority Leader Jim Steineke, R-Kaukauna, co-chairs the task force. He told WPR that preserving the use of choke holds for some situations could prevent more serious injuries.

"What Gov. Evers' legislation doesn’t take into account is if you take that tool out of the toolbox for law enforcement in the case of life-or-death struggles, they’re much more likely to go for their weapon, which could end up in higher cases of fatalities or injuries than if they’re allowed to use that choke hold," Steineke said.

The governor also called for a statewide ban on no-knock warrants. Steineke said the task force came to the conclusion that it didn’t have enough information about use of such warrants to recommend banning them. Instead, the group calls for the state Department of Justice to collect data on their use from local, state and federal law enforcement agencies before a recommendation is made. Steineke also pointed out some law enforcement officials argue no-knock warrants are valuable in certain situations, like when trying to recover a kidnapping victim.

Task force recommendations that broadly align with previously released bills from Evers include:

Steineke also pointed out the group came up with several new plans that hadn’t been part of previous proposals or debate.

"This package of legislation breaks new ground in new ways," he said. "The new legislation coming out of this is really important for transparency and accountability — those are areas that if we had just gone forward last year without these discussions, we would have missed."

Evers called a special session of the Legislature last August to take up his policing bills. Republican leaders convened and adjourned the session without taking action, saying they needed more time to consider possible law changes.

The new proposals unveiled by the task force Wednesday include:

Steineke said he expects the proposals to be formally introduced as legislation later this spring, which is several months later than lawmakers initially expected at the outset of the task force.

He said the proposals hadn’t been widely circulated among lawmakers before the report’s release, but he’s optimistic about getting bipartisan support for the plans.

"It’s hard to imagine where the pushback would come from," he said. "I have confidence, based on what I’ve heard so far, this will have support to pass our house and hopefully get through the Senate as well."