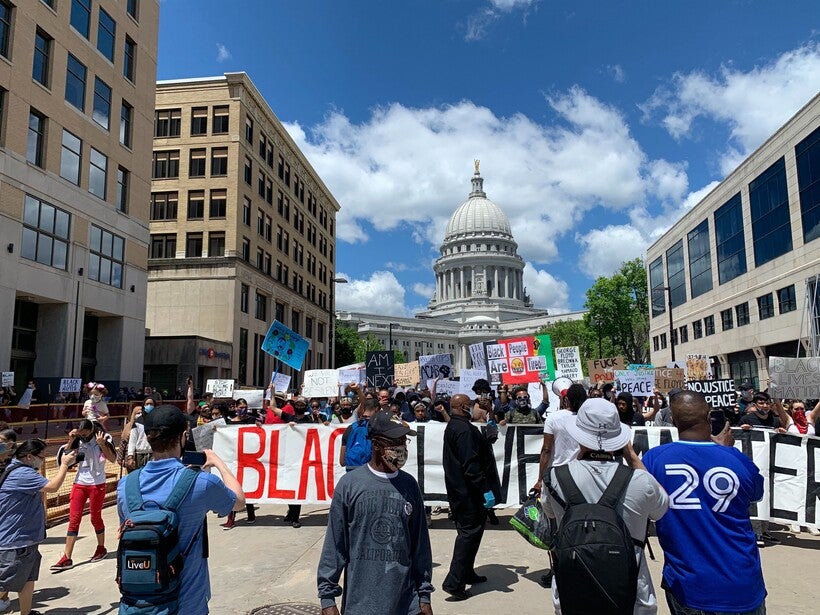 A gathering calling for justice in George Floyd's death took place Saturday, May 30, 2020 at the Wisconsin state Capitol. Attendees demanded justice for Floyd and others who have been killed by police officers, including Breonna Taylor, Tony McDade, Sean Reed, and Madison's Tony Robinson. Bridgit Bowden/WPR

Group To Include More Community Members Than Lawmakers
By Laurel White
Share:

A group tasked with proposing state law changes related to policing and racial inequality in Wisconsin will be mostly made up of citizens and will aim to get bills before state lawmakers by early next year, according to the two state lawmakers set to lead the group.

The task force, created last month by Republican Assembly Speaker Robin Vos, has been charged with writing a series of bills to address "racial disparities, educational opportunities, public safety, and police policies and standards in Wisconsin," according to the speaker’s office.

Assembly Majority Leader Jim Steineke, R-Kaukauna, and Rep. Shelia Stubbs, D-Madison, who is a member of the legislative Black caucus, will co-chair the effort. Speaking at a Tuesday morning press conference at the Capitol, Stubbs said Wisconsin, "is in a state of crisis" because of its racial disparities, which include wide gulfs between Black and white residents in incarceration rates, college graduation rates and median family incomes.

"This is shameful, this is unacceptable, and our community deserves better," Stubbs said. "We need to address the systemic racism and injustice with action, not with speeches, not with press conferences, but with action."

Republicans and Democrats in Wisconsin have disagreed over how to go about considering law changes related to policing and racial inequality this year.

Vos announced the task force on the same day Evers called the special session, less than 24 hours after a Kenosha police officer shot Jacob Blake, a Black man, seven times in the back.

Stubbs and Steineke acknowledged the recent partisan disagreements, but pledged to move forward with bipartisan cooperation.

"This is about checking your politics at the door," Stubbs said. "I’m not going to waste my time (doing) something that’s not going to make a difference."

"This doesn’t have to be about politics," he said. "We don’t have to be embroiled in partisanship, we can work to get things done."

According to Stubbs and Steineke, the group will consider the nine bills Evers introduced in June, which the governor urged lawmakers to take up during the special session. The bills include proposed bans on police use of choke holds and no-knock warrants.

The group will also consider bills introduced by state Sen. Van Wanggaard, R-Racine, that would, among other things, penalize local governments for shifting money away from their police department budgets — a move many activists are calling "defunding the police."

Steineke said the majority of task force members will be citizens, not lawmakers. He has previously said that could include faith leaders, community organization heads, and "people from all walks."

"Letting the community drive this conversation, I think, is critical," Stubbs said on Tuesday.

Stubbs said there will be between four and six state lawmakers on the task force, depending upon interest expressed by state senators.

People interested in being a part of the task force can submit a statement of interest to SpeakersTaskForce@legis.wisconsin.gov through Sept. 18.

Steineke said the group will meet every two to three weeks, beginning later this month, with a goal of producing bills to be introduced at the beginning of the next legislative session in January.

"The urgency is clear," he said.