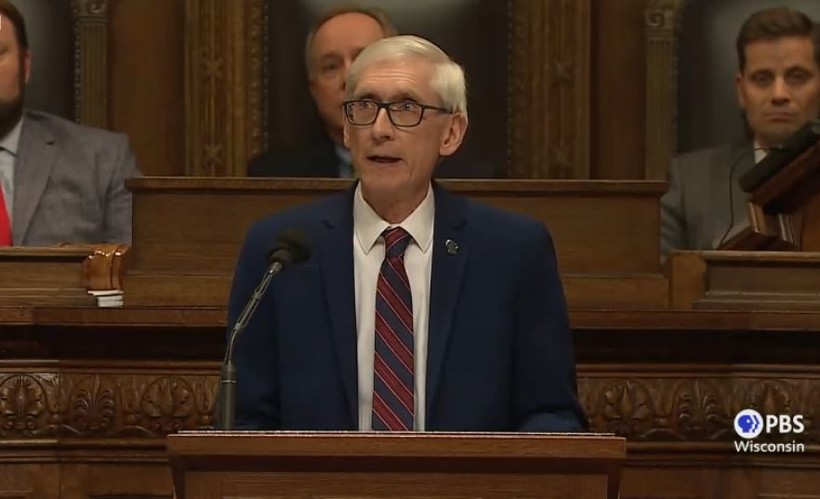 Wisconsin Gov. Tony Evers delivers his fourth State of the State address at the Capitol on Tuesday, Feb. 15, 2022. Photo courtesy of PBS Wisconsin

Gov. Tony Evers' approval ratings are back above water eight months ahead of his first reelection contest, a new poll found.

The poll also found the potential for very fluid primary races for the Republican nominee for governor and the Democratic nominee for U.S. Senate, with a majority of Republicans undecided about the GOP gubernatorial primary and a near-majority of Democrats undecided in the Senate primary.

The 41 percent disapproval rating for Evers is the lowest it has been in the poll since August 2020, when it was measured at 37 percent.

As it did for many governors in the early stage of the COVID-19 pandemic, approval of Evers' job performance went up in 2020, reaching a high point in the Marquette poll of 65 percent in March 2020. After that bump subsided, his approval stabilized around 50 percent for much of the year. Last November's Marquette poll was the only time Evers was recorded with a disapproval rate that exceeded his approval rate.

Pollster Charles Franklin said in part, these numbers reflect the simple fact that many voters haven't yet tuned in to the August primary contest.

But the GOP primary has the potential to be bruising: Ramthun is a devotee of false conspiracy theories about the 2020 election who has been praised by former President Donald Trump while Kleefisch has the support of Wisconsin Assembly Speaker Robin Vos and other conservative leaders. Nicholson has also stridently criticized Kleefisch.

The poll didn't ask about head-to-head matchups between Evers and the potential Republican challengers.

Johnson disapproval up in US Senate race; Barnes leads Democrats

The other key race in Wisconsin in November is Republican U.S. Sen. Ron Johnson's reelection campaign. The poll found Johnson with a 33 percent favorable rating and 45 percent unfavorable. In October, 36 percent of respondents said they had a favorable opinion of him and 42 percent unfavorable.

Johnson's favorability ratings have been in decline for longer than that. In August 2019, 40 percent of respondents said they had a favorable opinion of him and just 29 percent unfavorable. 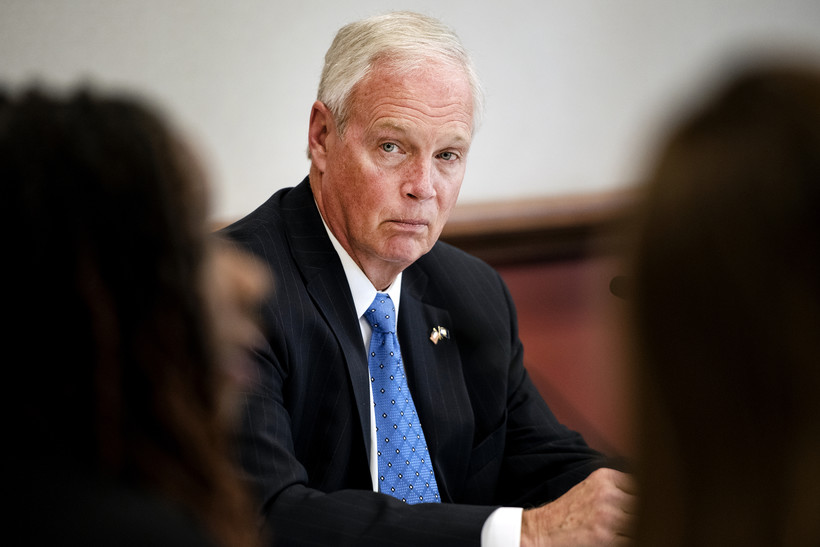 But the race among Democrats to challenge him is nearly as unsettled as the Republican gubernatorial primary, with 46 percent of Democrats saying they hadn't made up their minds yet. Among those who had a preference, Lt. Gov. Mandela Barnes led the Democratic field with 23 percent support. Milwaukee Bucks executive Alex Lasry came in second with 13 percent, and Outagamie County Executive Tom Nelson had 5 percent support. State Treasurer Sarah Godlewski had 3 percent, and all other candidates had 2 percent or less.

As in the gubernatorial race, the poll did not ask about head-to-head matchups between Johnson and the potential Democratic challengers.

The poll interviewed 802 registered Wisconsin voters in late February. The margin of error is 3.8 percent.

The Marquette poll rates well in the analytics website FiveThirtyEight's pollster rankings. However, like many pollsters, Marquette's measure of the 2020 presidential election was a significant miss. Its poll on Oct. 28, 2020, found Biden 5 points ahead of Trump. Biden won Wisconsin by less than 1 percentage point.

Forty-three percent approved of the job Biden is doing compared to 52 percent who disapproved and 3 percent who didn’t know. Biden’s numbers were nearly identical in October.

Trump’s favorability hit its lowest mark in the past three years, according to Marquette, with just 36 percent of voters viewing him favorably compared to 57 percent who view him unfavorably. In October, that split was 38-57.

A majority of voters also had a negative view of the direction of the state, with 39 percent saying things were headed in the "right direction" compared to 53 percent who said it was on the "wrong track."

When it comes to issues, inflation far-and-away outpaced other concerns from voters in Marquette’s latest survey.

Nearly 70 percent of respondents were "very concerned" about inflation. By comparison, that number was just 36 percent for illegal immigration and 40 percent for the coronavirus.

While peoples’ concerns over COVID-19 appear to be waning, 61 percent still said that closing schools and businesses due to the coronavirus was the "appropriate response" compared to 35 percent who said it was an "overreaction." In March 2020, 86 percent thought closures were appropriate.

Support for the legalization of marijuana hit a high-water mark since Marquette began polling on the issue in 2013.

Among all voters, 61 percent favored legalization compared to 31 percent who wanted to keep marijuana illegal. Seven percent didn’t know where they stood.

When looking just at Republican voters, 51 percent said they favored legalization of marijuana compared to 42 percent who opposed it.

Efforts to legalize marijuana — or even medical marijuana — have gone nowhere at the state Capitol, where most GOP lawmakers oppose the idea.

Confidence in the 2020 election

While GOP voters remain the most skeptical of the 2020 presidential election results, the survey found Republican confidence was increasing.

Marquette found 38 percent of Republicans were confident in the results of the election, up from 29 percent in August. The improvement comes despite a steady push by Republican lawmakers to change election laws and a highly publicized Republican investigation that recommended the decertification of the 2020 election.

At the same time, independents appear headed in the other direction, with 55 percent confident in the 2020 election, down from 79 percent in August.

Among all voters, 67 percent were confident the votes were accurately cast and counted in the 2020 election, which has been among the most scrutinized in American history.