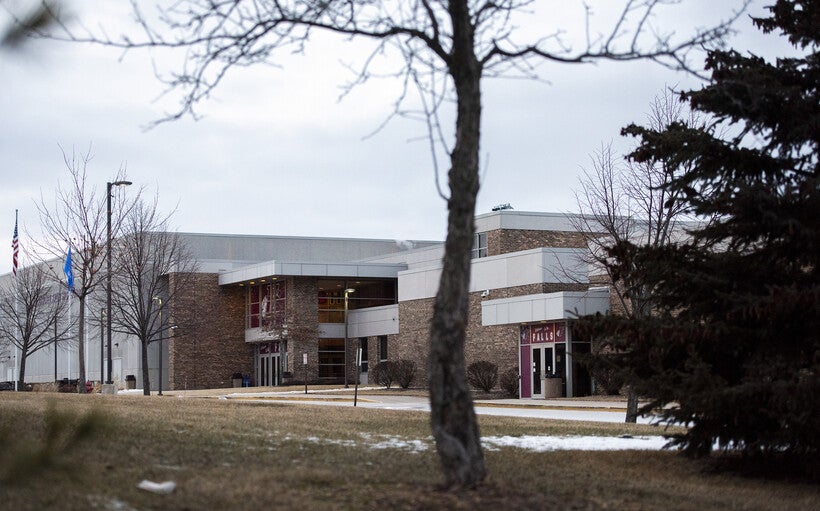 Menomonee Falls High School is in a district where one of the school board challenges is taking place. Angela Major/WPR

National politics grip many local elections as some board openings go to primaries Feb. 15
By Madeline Fox
Share:

Political polarization of the pandemic hasn’t spared Wisconsin’s school boards. Mask disputes and unruly crowds have shut down meetings, board members have faced recalls, and some have resigned over threats and verbal abuse. On Tuesday, those ongoing tensions will play out at polling places across the state, as many school boards hold primary elections.

School board members in Wisconsin serve three-year terms. Their tenures are staggered so that in any given election, about a third of the five-to-nine member boards are up for election each year. When there are more than two candidates per open seat, the county holds a primary election to whittle down the field.

This year's school board races are particularly lively in suburban districts, where in many cases, COVID-19 precautions have been mostly discontinued. But candidates who started by running campaigns against virtual learning and masking have translated that momentum into electoral challenges.

In Elmbrook, longtime board member Glen Allgaier will compete in Tuesday’s primary against two newcomers, former director of operations at Advocate Aurora Health Systems Kathy Lim and Daniel Medeiros, chief engineer at Milwaukee Tool. Medeiros supports COVID-19 mitigation measures and the policies like the equity principles school board members shot down last year after some decried them as "critical race theory." Lim, who according to the Milwaukee Journal Sentinel put out a campaign flyer that falsely quoted a former coworker, supports the school board’s decision to nix the equity principles and wrote on the neighborhood social network Nextdoor that Advocate Aurora’s vaccine requirement was a factor in her departure from the hospital system.

School board positions are nonpartisan, though party politics do often enter the race. School board candidates sometimes get funding and support from state and local party organizations. Recall challenger-turned Mequon-Thiensville school board candidate Scarlett Johnson, for example, is working with Republican gubernatorial candidate Rebecca Kleefisch and has received money from her political action committee. And national PACs have laid out step-by-step plans for communities to "flip" their school boards. 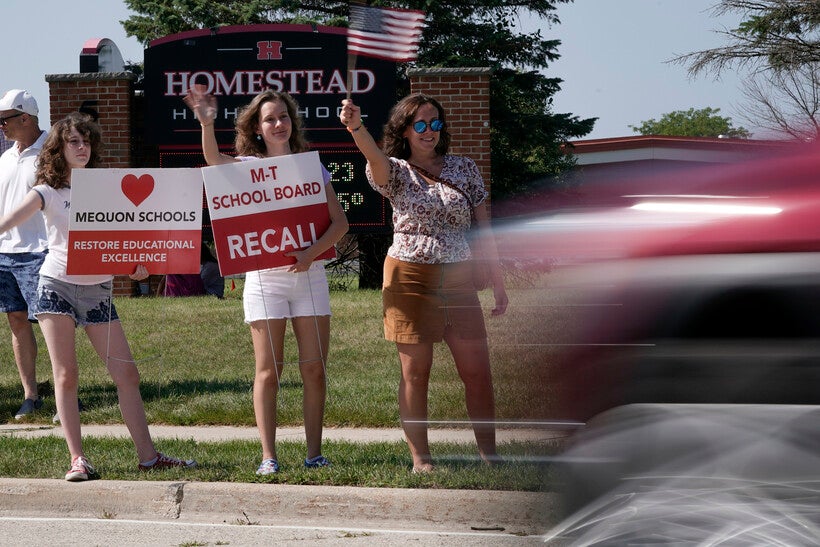 Supporters to recall the entire Mequon-Thiensville School District School Board wave at cars outside Homestead High School Monday, Aug. 23, 2021, in Mequon, Wis. A loose network of conservative groups with ties to major Republican donors and party-aligned think tanks is quietly lending firepower to local activists engaged in the culture war fights in schools across the country. Morry Gash/AP Photo

Terri Phillips, director of the Southeast Wisconsin Schools Alliance and a former school board member, said contested elections aren’t unusual — she remembers some of her own that were hotly contested and others that were quiet — but the explicit politics of some electoral challenges feel new.

"There are board members who are conservative Republicans who are being contested because they're not conservative enough, apparently," she said. "That’s been so interesting to watch."

Vladimir Kogan, a political science professor at Ohio State University who studies state and local government, said the politicization of pandemic-era school board elections was bound to happen after former President Donald Trump weighed in on COVID-19 precautions and The New York Times' 1619 Project. He said politics were similarly woven into school boards in the late 2000s when former President Barack Obama’s "Race to the Top" plan linked federal funding to Common Core standards.

"You have national political organizations seeing opportunity," Kogan said. "One way to keep issues salient is to have competitive elections where you have challengers running and raising these issues."

It’s no coincidence, he said, that many of the more dramatic challenges are taking place in suburban districts like Elmbrook, Mequon-Thiensville and Menomonee Falls.

"Urban areas are overwhelmingly blue, rural areas are overwhelmingly red, and really all the action is in the suburbs, and the suburbs are purple, so I think especially if you’re a Republican, and you’re thinking about, 'What issues do I talk about?' Right now, education is a great one," Kogan said. "Suburbs are the swing places, education is particularly salient there — elections are decided on the margins, and there is a large enough bloc of voters there for whom education could be a pivotal issue."

Cathy Olig, a board member up for reelection this year in Menomonee Falls, said she’s had to prepare more for this election than her first in 2019. She started fundraising and ordering yard signs back in December to prepare for a February primary, whereas in her primary-less race in 2019, she took those steps closer to the April election.

"It is very different from running my first campaign, it does have a different feel," she said. 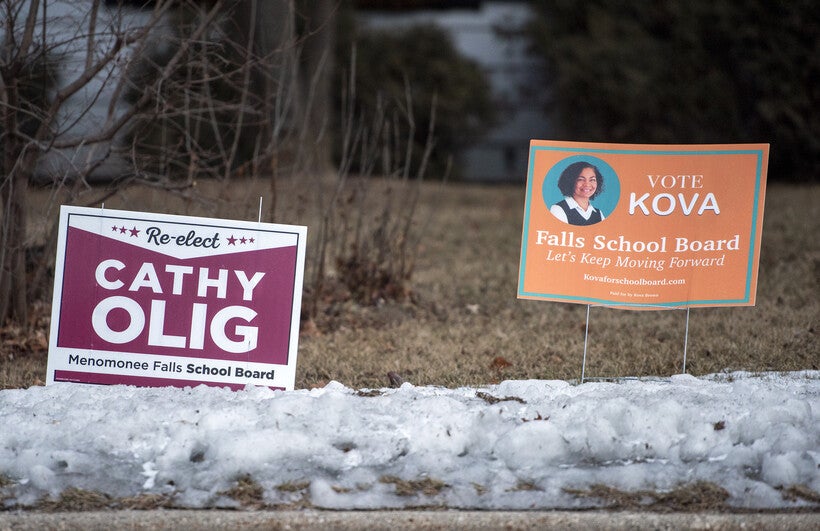 Tuesday’s primary is a continuation of the escalating political efforts around school boards. While the filing deadline for the April 2020 election came too early for the pandemic to play as large a role in those elections, the 2021 ballots were cast at the height of pandemic schooling tensions, when some districts were facing backlash for starting the school year virtually or having mask requirements.

In Wausau, the school board’s decision to begin the 2020-21 school year in virtual school led to an unusually nasty and partisan spring election in 2021, even after the school board had voted to return students to classrooms in October 2020. A bloc of three conservative candidates won that race decisively, unseating the school board president. This year, three incumbents and two challengers are seeking election for three seats on the board.

An unprecedented 17 school boards saw recall attempts between 2020 and 2021 over how board members handled COVID-19. All have contested elections this year — seven with enough challengers that they need to go to a primary.

In the Butternut School District in Northern Wisconsin, board member Gary Mertig retained his seat despite a December 2021 recall vote, one of only two recall attempts to garner enough signatures to make the ballot. Mertig isn’t up for reelection this year, but his recall challenger is running for the board’s open seat. The race has four candidates, meaning it will go to a primary — a rare occurrence in Mertig’s 31 years on the board.

"I’m trying to remember the last time we had a primary for school board," Mertig said, adding after a long pause, "it’s been a long time."

While the school board race is eventful, Mertig said the meetings have quieted down substantially. Earlier in the pandemic, he said they had to have attendees removed because they refused to wear masks and were shouting down board members.

"We had a school board meeting about two and a half weeks ago, and we had two people in the audience," he said. "Both were staff members; one came on their own and the other was invited because we needed information. There was no public there, and that kind of shocked me."

Kim Kaukl, president of the Wisconsin Rural Schools Alliance, said rural districts have had a quieter 2022 so far.

"I wouldn’t say the issue has gone away, but I would say it’s probably not as drastic as we’d seen in the fall," he said. "There are definitely candidates running on certain issues such as the masking, and the vaccination."

Still, he said he’s worried the debates over so-called critical race theory in suburban districts will spill over into more rural districts soon.

In the past, the debate over hot-button national issues at the school board level has been tempered by local issues like teacher pay and facilities updates. But Kogan, the Ohio State professor, said the hollowing out of local newspapers has meant there are often school board meetings with no reporters present, which means community members don’t know as much about local-specific issues.

"I think that counterbalancing has been going away," he said. "In the past, I think voters would have put more weight on those local considerations, because they would have been just as salient because of the coverage — and now I think those issues are going to get less weight, and voters when they’re deciding who to vote for are going to put more weight on national issues."

"Once in a while, we’ll have an issue that will have come up over the years, and sometimes it spurs interest in certain people running for the board and they become a one-issue candidate," he said. "And then as soon as they get on the board, they kind of lose interest. A lot of school board members that have done that in the past."

The primary election is Feb. 15. Voters can register at their polling place on election day — find out where your polling place is here. The general election for school board members is April 5.