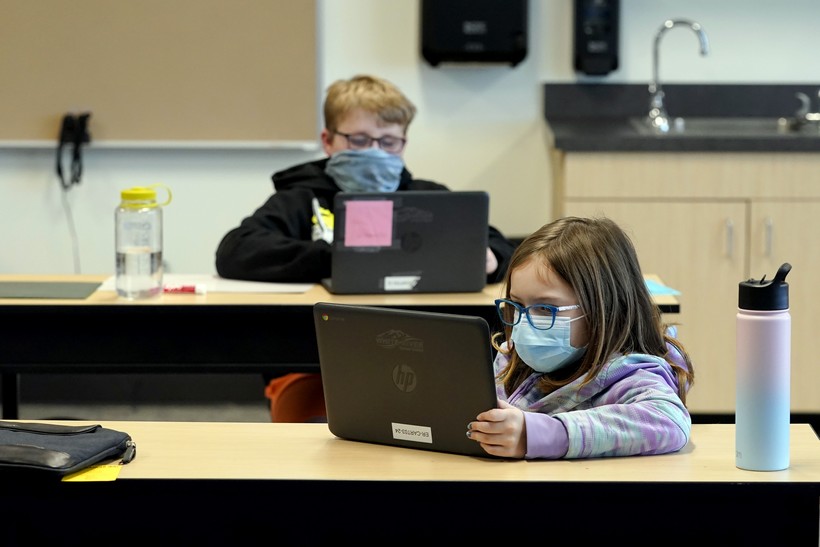 In this Feb. 2, 2021, photo, students wear masks as they work in a fourth-grade classroom, at Elk Ridge Elementary School in Buckley, Wash. Ted S. Warren/AP Photos

A bitter fight in the fall about whether Wausau schools should open for in-person instruction has turned into an unusually heated and polarized school board election that includes allegations of harassment and ethics violations.

Even after Wausau schools opened for many students in November, the battle lines of the conflict have largely stayed in the same place, and decisions made in 2020 have dominated discussions of the spring school board race. Board members and community members have characterized the race as uglier and more intense than any local race they’ve seen in decades.

"This has become contentious because of COVID-19," said John Masanz, a high school English teacher who is the president of Wausau's teachers union. "But, as somebody who's experienced COVID, as somebody who lost a father to COVID — COVID doesn't know politics."

Debates about institutions' response to the pandemic have been a central part of races for local office across the state. Because schools were a particular flashpoint in 2020, some school board races in Wisconsin's April 6 elections have attracted candidates who were active in opposition to pandemic restrictions.

A candidate in Green Bay called the district's lack of in-person instruction "the No. 1 issue today." In Platteville, which has had a hybrid of virtual and in-person instruction since the fall, a challenger said she ran because she felt the public's calls to reopen schools weren't heard. In Hudson, which also brought students back on a hybrid schedule, a candidate said she would "insist on exhausting every option before ever going back to a full online option for all students."

But if the dynamic is present in other cities, Wausau's race is a particularly acute example of it. In some ways, the election has proceeded as if schools hadn't yet brought students back.

"It's like there's a false narrative out there, and you can't break through whatever these biases are," said school board member Beth Martin, who is not seeking re-election.

The race for Wausau Board of Education in the April 6 election has three conservative challengers — Jon Creisher, Cody Nikolai and Karen Vandenberg — who are running as a slate. Their names appear together on yard signs; they've made joint candidate appearances, and they have the support of the local Republican Party. They're running against an incumbent, Tricia Zunker, and two challengers, Kay Gruling and Nick Bisgrove, who have the support of local Democrats. A conservative incumbent school board member, Patrick McKee, is also up for re-election. The top four vote-getters will fill four open spots on the board.

In July, the Wausau School Board voted to begin its school year with all-virtual instruction as a public health precaution. The decision followed similar votes in some of the state’s largest districts and came at a time of uncertainty about how the pandemic would progress. But it became a conflict locally, especially after many of the smaller rural districts, as well as the suburban D.C. Everest School District, chose to offer in-person or hybrid instruction for their students.

Parents opposed to the decision organized a Facebook group that was sometimes vicious in its condemnation of the board. Creisher, a leader of the group, asked in an August post whether parents could sue the board members. (WPR obtained posts from the group, which is closed to the public, but which includes more than 1,600 people).

The group organized protests, including one outside the home of school board President Tricia Zunker, who was also then a Democratic candidate for Congress. At school board meetings, critics of the board shouted and jeered. They also coordinated efforts to reply to all of Zunker's social media posts with criticism, something some people called targeted harassment.

One parent on Facebook posted a comment expressing hope that Zunker would suffocate on her mask. The New York Times later reported that one of the group's administrators, April Van Rixel, shouted down board member Martin outside her house to the point that Martin, fearing for her safety, called police.

The debate was heated in Wausau, but the same basic argument was playing out nationally, even in the presidential race. In multiple campaign visits to Wisconsin in October, then-President Donald Trump called for the state to "open your schools up," even as the unchecked spread of COVID-19 was putting the state in crisis.

Unlike many of Wisconsin's largest school districts, which would remain fully virtual well into 2021, the Wausau School Board voted in mid-October to resume in-person school on Nov. 2. Zunker voted in the minority, against reopening. Elementary school students returned five days a week (the district would later cut it back to four), while students in grades six through 12 alternated in-person and virtual learning days.

By that time, though, the parents who had organized against the board's decision felt they had been disrespected and ignored by the board, according to the candidates' statements. Creisher, Vandenberg and Nikolai would announce their candidacy in December. 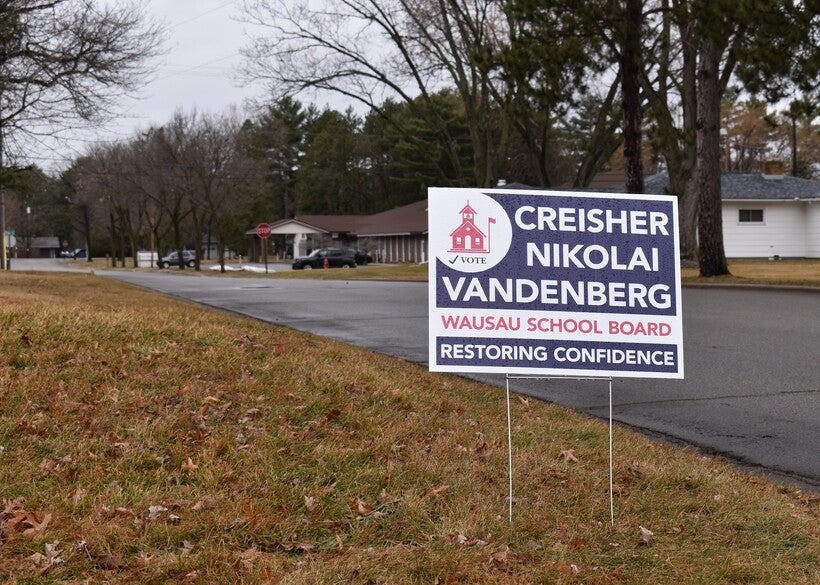 A progressive group filed an ethics complaint against conservative candidates for Wausau School Board because their signs do not disclose who paid for them. Rob Mentzer/WPR

Their candidacies have been championed by local right-wing talk radio and conservative activists, and have attracted opposition from progressives. This week, a member of the left-wing group Citizen Action of Wisconsin filed complaints with the Wisconsin Ethics Commission against the three candidates on the grounds that their campaign signs and Facebook ads violated election law by not including a "paid for by" disclosure line. In a March 23 post on Facebook, the three issued a joint statement saying their printer made an error on their signs and they've taken down the Facebook ads.

Schools Have Not Been Drivers Of Community COVID-19 Spread

Despite the fears of some parents and board members who voted against reopening, there has been little evidence of significant spread of COVID-19 in Wausau schools.

"In hindsight, it turned out OK," said Martin, who voted against returning in October.

A retired middle school librarian from the D.C. Everest district, Martin has worked for the Marathon County Health Department doing contact tracing during the pandemic. She said even in that work, she encountered very few indications of students driving the spread.

Recent scientific evidence has supported that view as well. A January report from the Centers for Disease Control and Prevention concluded that "there has been little evidence that schools have contributed meaningfully to increased community transmission." That report used data from a study conducted in Wisconsin Rapids schools.

Masanz said the teachers union initially opposed reopening schools in the fall semester. As the school year has proceeded, he said district administration has worked with teachers to ensure effective mitigation strategies would be in place.

"I spoke in front of the school board," Masanz said. "I said, 'All I ask is that you continue to keep us in the loop and to continue to make the best safety and health decisions.' ... We didn't kick and scream."

The union has endorsed Zunker, Gruling and Bisgrove — the candidates supported by Democrats — as well as conservative incumbent McKee, who Masanz characterized as thoughtful and "pro-education." He said the level of vitriol in the local debate has left him "disappointed, to say the least."

"To see our citizens of a certain political ilk get so upset as to attack the home of an elected official was disappointing to me as an educator," he said. "It did not make for good role models for our children." 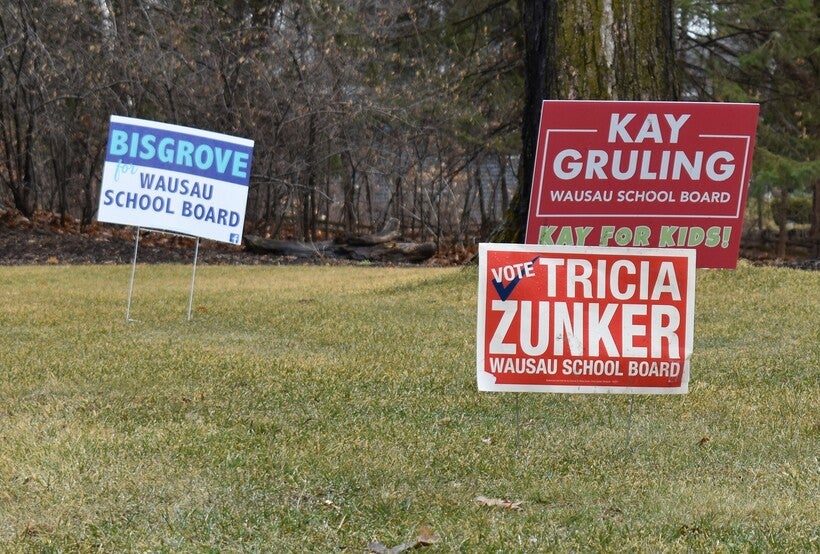 Masanz, the high school English teacher, and his family came down with COVID-19 less than a week after the school board voted in October to reopen schools. His father later died of the disease; the family had to say goodbye to him through an online video, while a nurse in Wausau held his hand.

"It's visceral for me, for my family," he said. "People who don't wear masks, who handle (the pandemic) so cavalierly, I don't have a lot of time for."

But the pandemic is in a very different place now than it was in the fall. Today, a majority of Wausau teachers have had at least a first dose of COVID-19 vaccine, and many have had a second dose. Masanz said the difference in teachers' anxiety levels is palpable.

You can see it "in the looks on their faces," Masanz said. "You can feel it."

On Monday, the Wausau Board of Education voted to return to five-day in-person instruction for all grade levels in the fall. The vote was unanimous.