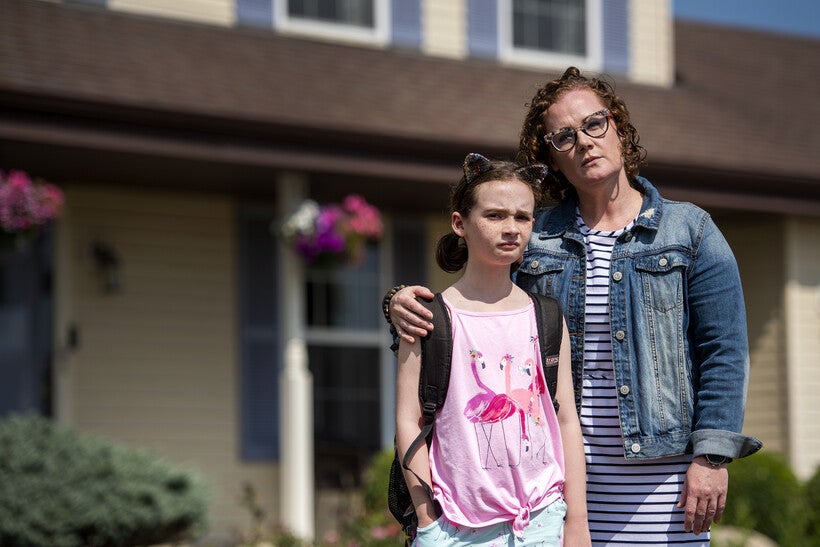 Ann Zielke, right, stands with her daughter, Isla, on Tuesday, Aug. 3, 2021, in front of their home in Muskego, Wis. Angela Major/WPR

With fewer COVID-19 precautions at school and no mandates from their health department, some Waukesha County families feel stuck

Parents say they're terrified their kids will get COVID-19 at school, where few wear masks and quarantines are minimal
By Madeline Fox
Share:

When Susan Shutter and her 7-year-old daughter leave physical therapy, Maggie’s first question is, "Maggie can go to school today?"

Ordinarily, that’s where they’d head after physical therapy, but with COVID-19 cases reaching new heights among kids, Maggie and her 15-year-old sister Denia have been staying home since winter break.

Denia has cerebral palsy, and Shutter said her lungs can’t handle even a mild strain of COVID-19 — she’d need to be hospitalized, at a time when hospital beds are increasingly full. The family adopted Maggie out of foster care two years ago, and they don’t know how she’d respond to COVID-19, but even if she squeaked by with only mild symptoms, the chance that she’d give it to Denia is so high they can’t risk either girl being in school when their district, Muskego-Norway, isn’t requiring masks.

But it’s hard on the kids, Shutter said.

"(Maggie’s) special education teacher sends home videos, and she tries to talk to the video," Shutter said. "We can teach her ABCs and everything and work with her, but it’s not the same as being with her friends, her peers, the consistency, the routine."

Denia has been listless and unhappy without in-person school as well, Shutter says.

"Because we can’t be going anywhere, school is where she interacts with peers," she said. "She goes to band, she has a cooking class, they have adapted arts."

When students in Waukesha County started classes in the fall, many walked into schools without any of the COVID-19 precautions they’d had the year before. Students aren’t required to wear masks. Social distancing isn’t enforced. If there are quarantine requirements at all, parents say they’re not always followed, or don’t line up with new CDC guidance that allows a return after five days with the caveat that the exposed person should mask through day 10.

'Just have kids wear a mask'

Shutter said she would send Denia to school in a mask, but when school staff sometimes sent pictures home, she would see that the mask had slipped down below Denia’s nose, and she doesn’t have the motor skills to pull it back up.

Even for kids who can mask properly and consistently, parents acknowledge that it’s a lot to ask for them to be the only child in their classes who’s doing so.

Ian Dickmann, whose daughter Charlie is a second-grader in the Menomonee Falls school district, said she was one of only a couple students in her summer school class who wore a mask. (The district made them optional beginning with summer school and carrying through this school year.)

"Trying to get a first-going-on-second-grader to understand to wear a mask when they’re the only one wearing a mask is very difficult," he said. "It’s hard enough to get adults to wear a mask, let alone a child who, you want to impress the importance of it, but you also don’t want to scare her."

Dickmann said his family’s two-bedroom condo doesn’t have space for anyone to isolate away from the rest of the family, so he was worried he or his wife would get COVID-19, spread it to the other, and would be too sick to take care of their daughter.

"That’s why we took it so seriously, because our fear was, if both of us go down, we have some family nearby, but we’re transplants from Northern Illinois. Who’s going to come rush over and watch our daughter if we’re taken to the ER or something?" he said.

He’s testified at school board meetings asking for a mask mandate, rather than simply encouraging masking, as is the school’s current policy.

"That is the lowest common denominator, easiest, low-hanging fruit that we could do, is just have kids wear a mask, and teachers," he said.

He said he’d also like the school to provide testing, as many schools are doing under the state Department of Health Services’ free program.

William Gottemoller, a junior at Menomonee Falls High School, has also been testifying to the school board asking for COVID-19 precautions. He’s vaccinated, and said he has minimal risk factors himself, but when one family put out a call for people to testify in favor of COVID-19 precautions before the school year started, he said he was eager to help.

"It was not really as much of a fear for myself, but I’m surrounded by a lot of people who have at-risk parents, have at-risk family members, or they themselves are at risk," he said.

He said about one in five to one in 10 of the students at his high school wear masks, and maybe half the teachers. In the elementary school where he tutors, mask-wearing among students is higher.

Gottemoller said he’d like to see universal masking efforts to minimize the clustering of students during passing periods and before or after school — some schools have staggered dismissal times to better allow for social distancing in hallways — and more stringent quarantine protocols that also allow for students to check in virtually or have work sent home if they’re quarantining because of a close contact.

Gottemoller said he’s gotten pushback at meetings. When he testified to the board last week, he said he was the only student in the crowd and the only person testifying in favor of precautions. He said he heard sarcastic laughter and some dismissive comments during his speech.

"They’re not students, they don’t actually experience school," he said. "I’m a student in this situation, and when there are adult parents that are so, not only disrespectful, but truly immature, as another community member (testified) — who is also a student — as to laugh at me, I found that just terrible," he said.

Muskego-Norway nor Waukesha's school districts provided comment for this story.

While some county health departments have put precautions in place that guide their school districts, like Dane County’s mask order, parents in Waukesha County say they’re disappointed that the county health department isn’t stepping up to do what schools won’t. Some even say that the health department’s lack of a mask mandate, more binding quarantine guidelines, or a threshold of positive COVID-19 cases at which a school would be required to go virtual gives school districts cover for not having those policies, since they can say public health officials don’t think they’re necessary, either.

"I definitely feel like our health department bowed to political pressure over science and medical advice," said Dickmann. "Nobody wants to step out of line and do anything proactive to prevent things."

A spokesperson for the Waukesha County Health Department said that Wisconsin’s "home rule" decision-making process means local elected officials are responsible for setting policy in their jurisdiction — in the case of schools, it’s school boards who have the final say.

"While Waukesha County makes recommendations to schools, it is up to the school board to operationalize these recommendations to best serve their populations," she said. "Our goal, all along, has been to balance the mental health and development needs of children and families with the risks associated with the pandemic."

She said the health department has held weekly calls with district superintendents and school nurses to help guide them through the pandemic, helped connect students and families to vaccination and testing sites, and paired county staff with each school to help them contact trace positive cases.

Still, Dickmann said it’s frustrating to look across the county line and see schools taking precautions that have been largely abandoned in Waukesha County. Milwaukee schools started virtually after winter break amid the omicron and ongoing delta variant waves, and Wauwatosa public schools have set thresholds of positive cases at which masking is required, gatherings are limited or schools will go virtual.

Parents wonder whether to leave the district

It’s made some Waukesha County parents contemplate moving school districts. Shutter in Muskego-Norway looked into school choice programs for her two daughters, but said she’s not sure she could match the quality of Muskego-Norway’s special education services elsewhere in the area. Given her daughters’ history of trauma in the foster care system, she’s worried that the disruption of a totally new environment would be even more damaging.

"The (Muskego-Norway) special education department was serving them really well," she said. "They know our girls now, they understand them — their background, the way they respond to things."

One mom, Karen Fraley, did pull her kids out of their in-person schools in the Waukesha district to enroll them in eAchieve Academy, a district charter school that’s fully online. Her daughter, a kindergartner, was at high risk for severe disease pre-COVID-19 because even her mildest respiratory infection turns into pneumonia — once, she caught it twice in the same month.

"I’ve had that experience of sitting up all night next to a kid with a 104-degree fever, and you’re just trying to weigh, do you wake them up and stick them up in the bathtub because the Tylenol isn’t working?" she said. "Do we go to the hospital? How do you make that decision at 3 in the morning?"

She said she was hoping to send them back into Bethesda Elementary once the delta wave had died down, but with the rise of the highly contagious omicron variant, she’s not sure when it will be safe to send her children back in person. It’s disappointing, she said, because both her kids are supposed to be in the school’s dual-language immersion program, and can’t get that kind of bilingual education online.

To feel safe sending them back, she said she’d want to see a mask mandate, an on-site testing facility, robust contact tracing, strict quarantines for people who are symptomatic or directly exposed, and more transparency about the data on the school district’s COVID-19 dashboard. She said she’s also disappointed the district didn’t use more of its federal relief funds for high quality air filters.

Overall, she said she doesn’t have much trust left in the school board, upper levels of administration in her school district, or the county health department.

In the meantime, families are connecting with one another, pushing for policy changes, and doing their best to protect their own kids and families with vaccines and masks.

Ann Zielke, another Muskego-Norway parent who’s been outspoken about pushing for more COVID-19 precautions since before the school year began, said she’s become a resource for parents, even putting some of her stack of KN95 masks out on her porch for them to pick up.

"Starting Saturday, the first (of January), my phone started ringing and hasn’t stopped ringing since," she said. "To almost an extent that hasn’t been before, parents are freaked out, and rightfully so. They were worried about sending their kids back, they were worried about not having the right kind of masks and could we help them get KN95s for their kids. I was inundated with questions and concerns."

Zielke said it’s been taxing to constantly be emailing and calling her school district and her health department, asking them to change their policies — and to be constantly fielding calls from other families who are similarly frustrated and frightened.

"It takes a lot out of me, but I have this mindset of like, if I don’t do it, who’s going to do it?" she said. "If I don’t hold their feet to the fire, and no one does, then they get away with doing what they know is wrong, and no one holding them accountable."