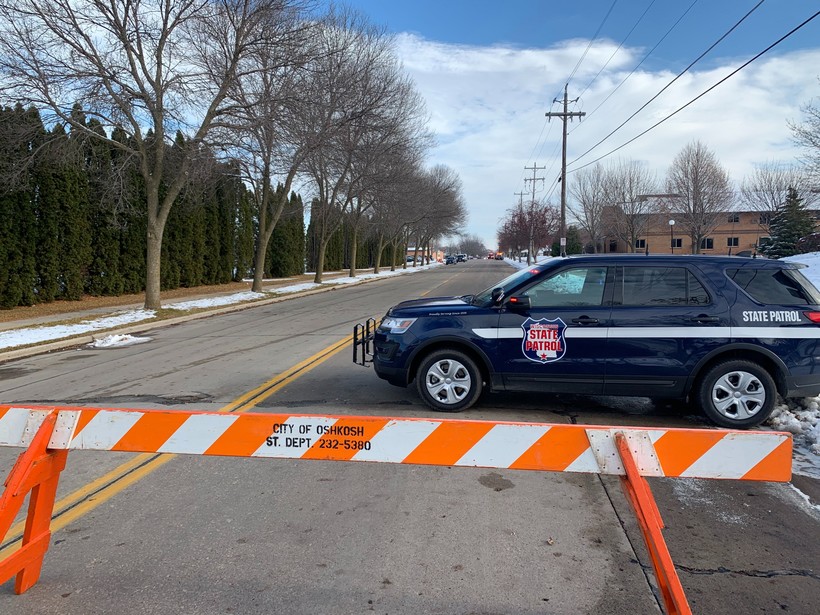 Oshkosh police have set up a perimeter surrounding Oshkosh West High School after an incident involving an armed student put the school on lockdown on Tuesday, Dec. 3, 2019. Bridgit Bowden/WPR

A second Wisconsin high school student was shot by a police officer in as many days Tuesday morning.

A 16-year-old student at Oshkosh West High school got into an altercation with the school's resource officer and stabbed the officer, who then shot the student shortly before 9:12 a.m., said Oshkosh Police Chief Dean Smith. Smith was not able to say whether the student was armed with a knife or another type of weapon.

Smith said the first responding officer arrived at the school at 9:14 a.m., and both the student and resource officer were given medical attention and transported to a local hospital. Smith said they were both being treated and he believed neither had sustained life-threatening injuries.

The high school was locked down, and by 11 a.m. students were being evacuated to Perry Tipler Middle School, where they were being reunified with their parents. Smith expected all parents and student reunifications to be completed by 2 p.m. An Oshkosh Area School District press release noted that all middle schools were placed on a "soft lockdown" and all other district schools were observing "restricted movement" Tuesday morning.

Smith said the high school was secured by 11:18 a.m. and that the incident was isolated to the single encounter between the student and the officer. There were no other injuries reported.

The state Department of Justice's Division of Criminal Investigation (DCI) will be investigating the shooting, according to police.

District Superintendent Vickie Cartwright told reporters she was grateful for "the proactive safety measures in place throughout our district."

Cartwright also thanked community members who took in students who evacuated the campus during the lockdown as well as students' families for following district emergency procedures and being patient with the reunification process.

"Our students' safety is our No. 1 priority. We are committed to providing a school environment where students can feel safe in mind and body," she said. "Today's tragic event shows that trained school resource officers can help save lives."

School will be canceled at all district schools Wednesday. Cartwright said the district will be sending information to families about available counseling services.

Julie Holly, a former high school counselor who works with the American Red Cross, responded to the high school Tuesday. She said parents will need to watch for stress reactions in students who were in the school.

"I think the thing that's most important right now is to, for them, to have a feeling of safety, and for parents to know that if they're seeing signs of acute stress reactions, you know not being able to sleep, change in grades down the road, chronic fatigue, change in eating habits, things of that nature," Holly said. 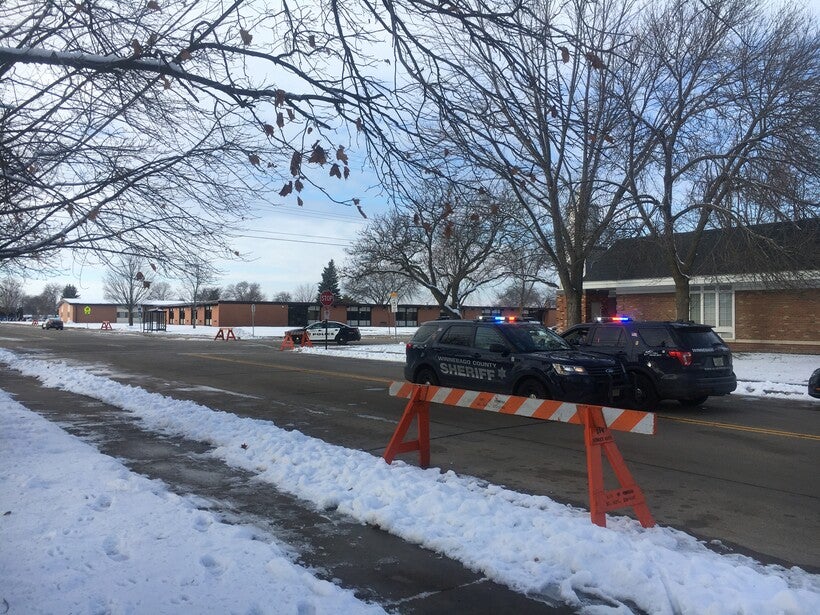 Police outside of Oshkosh West High School on Tuesday, Dec. 3, 2019, after the school was put on lockdown after an incident with an armed student. Megan Hart/WPR

The shooting comes a day after an officer shot a student at Waukesha South High School. That 17-year-old student was armed and did not follow police orders to drop his weapon. There were no other injuries reported in that incident.

Other school districts around the state were also dealing with threats Tuesday. Schools in Germantown and Grafton had increased police presence on campuses after receiving threats that were eventually determined not to be credible.

The Sparta School District canceled classes district-wide Tuesday after receiving information that a student was possibly in possession of a missing handgun.

Gov. Tony Evers issued a statement Tuesday about the incidents, saying no student "should be afraid to go to school or be in the classroom."

"The last two days tells us that we can’t keep pretending that this only happens in other communities or in other states—it’s happening here, too," Evers said. "We can’t just accept that violence in our schools is a foregone conclusion, and we have to get to work to do everything we can to keep our kids and our communities safe."

Speaking to reporters Tuesday morning at the state Capitol, Wisconsin Attorney General Josh Kaul said DCI was still learning about the details of the Oshkosh shooting.

Kaul said it was difficult to say what might help prevent these incidents in the future, but he said more needed to be done to identify threats. He said that could include investments in mental health programs for students.

"These incidents, even if the worst possible scenarios are averted, these are incidents that can leave people with serious and lasting trauma if they’ve witnessed them, if they were present in the schools when they happened," Kaul said.

Kaul said going forward it would be important to provide help to students and teachers who’ve been impacted by these shootings.

"I feel really sorry for our kids that they’ve got to go to school in this environment," Kaul said. "And I want them to know that there are people working to make our schools safer."

Wisconsin U.S. Sen. Ron Johnson issued a statement Tuesday afternoon expressing thanks that "larger tragedies may well have been averted due to training, and the swift and courageous action of students, teachers, school administrators, and armed school resource officers."

"This confirms that action can — and should — be taken to mitigate harm and limit casualties when weapons are brought into schools," Johnson said.

After the shootings Monday and Tuesday, Wisconsin will have had 30 total shootings by law enforcement this year, which is the most there have been since anyone started tracking the number in 2015.