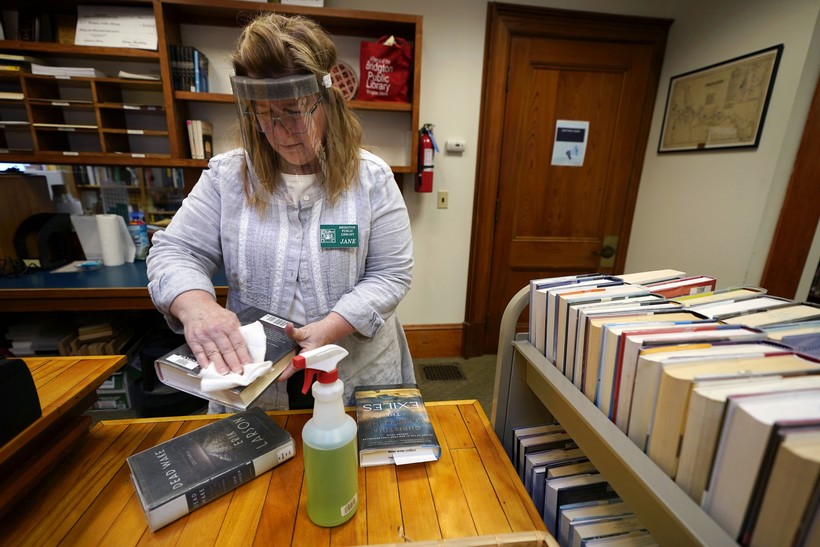 One of the first things Marathon County Public Library branches did when the state shut down in March was move their internet routers closer to the windows.

In many Wisconsin communities — especially rural ones — the library is one of the most reliable places for internet access, and draws everyone from students to job-seekers and remote workers who need to connect. With those buildings closed, Marathon County Public Library director Ralph Illick said making sure people could at least access the internet from the parking lot was a top priority — especially as schools moved online.

"I think by about April, we'd been able to make sure that in our rural communities, the constituents there and the municipalities we serve there were made aware that we kept our Wi-Fi on 24 hours," he said.

Marathon County's library system, and those around the state, have had to roll with the punches of a global pandemic that's forced them to make plans only to see them scrapped or reworked as infection rates changed, and pushed them to find new ways to deliver services.

"What I saw from libraries across the state was that desire to get services back to their communities, almost the day after they shut their doors," he said. "We provide access to information, as libraries, and we're going to do that however we can."

Miller himself used his library's parking lot Wi-Fi with his kids — they were selling their house and needed to keep themselves entertained and out of the way during showings.

"Librarians were so creative at finding ways to expose parts of their collection that never would have been touched had the pandemic not made them do that," he said. "Hearing the stories, and seeing what they did, is just incredible."

Even before the pandemic, libraries have been seeing a shift toward digital resources and programming over the last decade, according to a Wisconsin Policy Forum analysis of DPI data earlier this year. In-person visits to libraries have been trending down since the peak of the Great Recession in 2009, while the use of digital collections has been climbing.

"What libraries were thinking of has increasingly been not 'I'm a place with a bunch of books in it, and we'll provide information and you can come in,' it's 'How do I best serve my community?" said Miller. "Being able to provide it where the people in the community are, and not expecting them to come into the library to get that all the time."

When libraries closed their locations to in-person visitors, libraries started highlighting those resources even more.

"People are finding us because they need us now," said Milwaukee Public Library Youth Services Coordinator Kelly Wochinske. "It's great to be able to share those resources out, and have someone come in with a question and be able to say, actually, we've got you covered there."

Wochinske said she's been pointing people toward online book and movie libraries, like OverDrive and Hoopla, as well as virtual tutoring like Brainfuse — all resources the library had before, but which have become more necessary as it's been harder to get physical books, DVDs and in-person help.

The library has also been loaning out Wi-Fi hotspots to help families stay connected to the internet when they can't linger in the library.

"A library lending program for hotspots is not a fix for the digital divide, but it was something we can do," Wochinske said.

One bright spot of the pandemic has been the ability to bring new services to a virtual audience, Wochinske said. With the people reading books at story hour able to present from their own homes, Milwaukee Public Library has been able to add children's story hours in Hmong and American Sign Language. The library's annual teen art contest moved online, which Wochinske said has led to more people voting on their favorites.

Illick, too, has seen some silver linings in the changes forced by COVID-19 — particularly in Marathon County Public Library's expanded reach through digital programming.

"I just found out that one of our branch library book clubs, which meets virtually now, actually has a new member from Nebraska," he said.

Adapting To An Ever-Changing Situation

As the pandemic wore on, Milwaukee Public Library was able to expand from curbside pickup at a few of its locations to more branches, and then to allow people into the buildings to pick up books and access a few in-person resources. Recently, however, the libraries had to shift back to curbside only.

In Marathon County, Illick said his library branches also went strictly curbside for the first several weeks of the pandemic, before allowing some library services — including computer usage and, at some libraries, small group browsing by appointment.

"I do have to really strictly balance the whole spectrum of patron and staff safety," said Illick.

He noted that a number of his employees, including Illick himself, are in high-risk categories for COVID-19 because of their age or other health factors. Some retired this year, spurred in part by health concerns, reducing his staff of 55 by about 10 percent.

A little less than two months ago, Illick said he'd been prepping a presentation for the library board on getting learning "pods" of students who were struggling to log on to virtual classes into some of the branches where the internet and devices were easier to access.

"Just as soon as we were ready to do that here at the main library, everything spiked, so we put that on hold," he said.

Looking ahead, Wisconsin libraries are trying to plan for the summer — their busiest season between youth programming, summer reading and events — while still unsure what the pandemic will look like then.

"On the days when I'm feeling positive, I imagine it to be some sort of hybrid between some in-person service, but still a lot of the virtual service — but hopefully to build back up a lot of participation," said Wochinske, from Milwaukee.

The pandemic may also wreak some havoc on library budgets down the road. Wisconsin libraries are funded through their city or county budgets, and therefore have to carve their funding out of a pot that also covers fire, police and other municipal services. With cities and counties bracing for hits to their usual revenue, that pot gets smaller.

"Anything that is going to impact the way a city sees that revenue and doles it out is going to affect the library indirectly," said Wisconsin Policy Forum researcher Ari Brown, who worked on a recent report about Milwaukee Public Library's finances.

DPI was able to dole out some extra funding from the federal coronavirus relief bill, most of it directed at internet services to bridge the digital divide.

"I think it'd be unrealistic for any of our 25 departments and agencies here in this county to anticipate anything other than some challenges, I believe by about June of next year," said Illick. "What we're trying to do at this library is prepare for it."

Wochinske said budget concerns fall more under the library director's purview, but noted that librarians will likely deal with any upcoming fiscal challenge the same way they've handled all of 2020's other curveballs.

"We serve youth — we're just going to figure out how to do it no matter what the budget is, whether we're at home or in the building," she said. "We'll just take it as it comes, and figure it out."