In-Person Campaigning Can Be Dangerous In a Pandemic. Wisconsin Politicians Are Finding Ways To Do it Anyway.
Listen
Home
/
Swing State
Tuesday, September 8, 2020, 6:25am
By
Rob Mentzer
Share:

At an online training session for candidates in early August, Wisconsin Democratic Party staff talked to candidates about strategy, organizing and how to rally support virtually.

"Throughout the training, they were saying things like: 'At this time, it's not safe to knock doors,'" said Lee Snodgrass, an Appleton Democrat. "But then they would also say, 'Each candidate and campaign is going to make a decision that's best for their campaign and their community.'"

In between those two statements, Snodgrass said, lies the gray area of campaigning during a pandemic.

Despite the party's warnings, Snodgrass, who is running for an open seat in the 57th Assembly District against Republican Eric Beach, is knocking on doors for her campaign. She goes by herself, without volunteers and always wears a mask. She backs up more than six feet after knocking on the door or ringing the bell, and she asks the person who comes to the door if they're comfortable speaking with her. She's trying to be sensitive to people's health concerns, and careful to avoid the risk of spreading COVID-19.

But she's also working hard to win votes in a region, the Fox Valley, that is one of the parts of Wisconsin Democrats are most hoping to swing in their direction. And even in a pandemic, there is a fundamental rule of politics:

"Voter contact," Snodgrass said, "is how you get votes."

The coronavirus brought a halt to in-person events of all sorts in March, but in the months since, many have returned — from restaurant meals and retail shopping to concerts and political speeches. And in an election year, Snodgrass is far from the only candidate navigating how to get her message out while also respecting the boundaries of anxious voters and the best advice of public health professionals.

"Voter contact," said Lee Snodgrass, a Democrat running for an open seat in the 57th Assembly District, "is how you get votes."

Wisconsin Republicans Campaign In Person More Than Democrats, But Both Sides Are Getting Creative

When it comes to campaigning during the pandemic, there's a clear partisan divide in Wisconsin. Since March, Democrats have been conducting most of their campaign organizing online, by phone and by text message. Republicans, who in July held their state convention indoors without requiring masks or social distancing, are much more likely to campaign in person. Republican state Sen. Roger Roth was part of a "Women for Trump" rally held indoors, without masks or social distancing in Neenah in late July, and it is far from the only example.

All seven Republican candidates for Congress in Wisconsin held or participated in in-person campaign events over the summer, and posted about them on social media. WPR found no social media posts from the state's eight Democratic congressional candidates at in-person campaign events they held, though several did participate in Black Lives Matter marches, and one, Amanda Stuck of Appleton, was part of an outdoor rally against service cuts at the post office in late August. 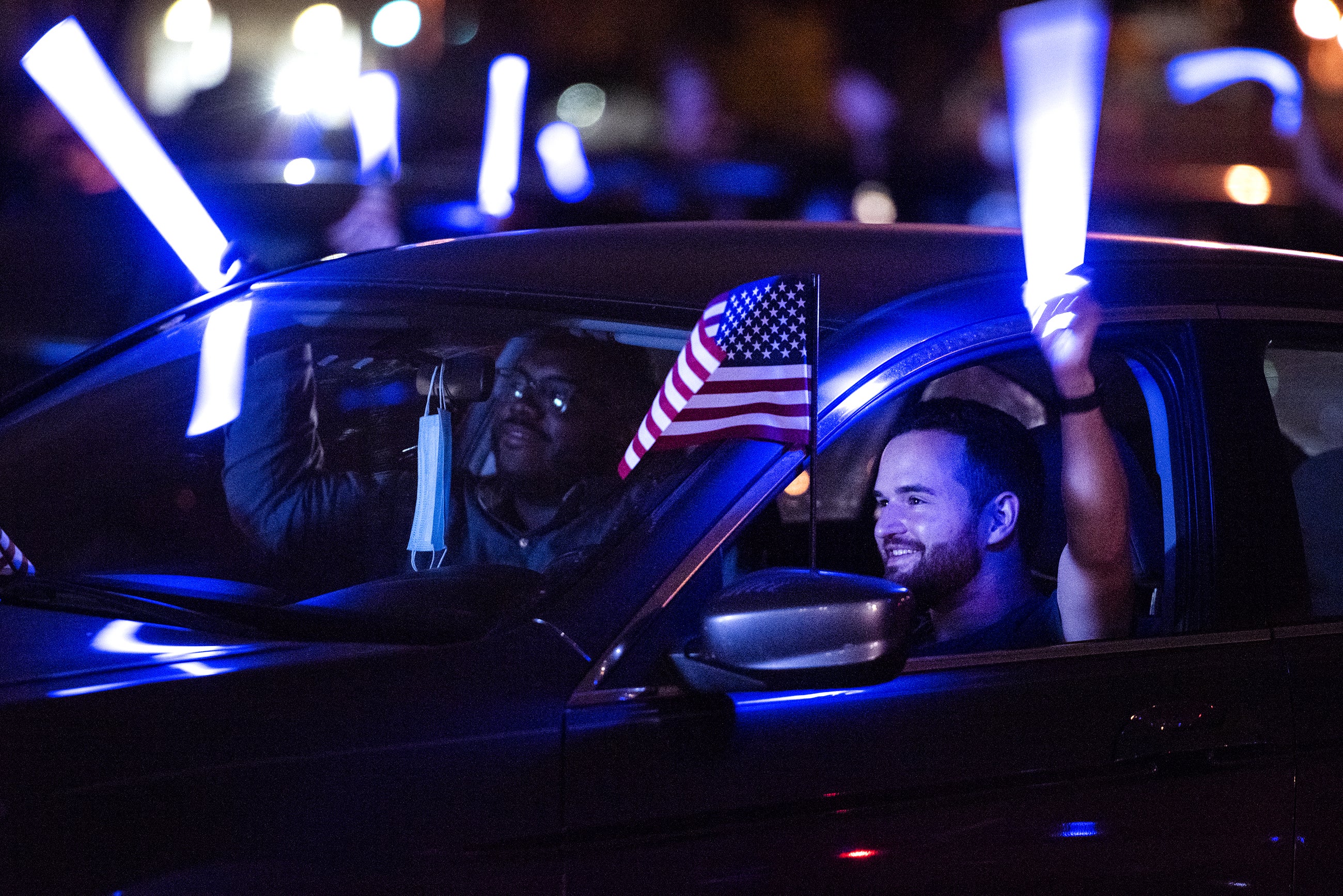 Matt Feinberg of Franklin, Wis., watches the final day of the DNC from his car Thursday, Aug. 20, 2020, at the Milwaukee County Zoo. Angela Major/WPR

Members of Congress and congressional candidates generally have more money and more ability to get news coverage than state-level politicians. For Assembly candidates, knocking on doors is generally a necessary part of the campaign simply because they aren't as well-known, can't count on a large audience for social media videos and likely can't afford expensive TV campaigns.

"I want my work to speak for me (this year) more than me trying to guess if I should be knocking on everybody's door," said Rep. Scott Krug, R-Rome, who was first elected in 2010. "But I'm still going to do some door-knocking."

Like Snodgrass, Krug wears a mask when he's out, and backs up from the door to give voters distance.

"I'll make my choices, you can make yours," he wrote in a social media post in July that showed him out canvassing with a mask on.

"I want my work to speak for me (this year) more than me trying to guess if I should be knocking on everybody's door," said state Rep. Scott Krug, R-Rome. "But I'm still going to do some door-knocking."

The pandemic has forced all campaigns, Democratic and Republican, to find creative ways to get people's attention and bring people together in low-risk ways. It's one reason supporters of President Donald Trump have had so many boat parades this summer. Both Democratic and Republican conventions in August included drive-in watch parties for their partisans. 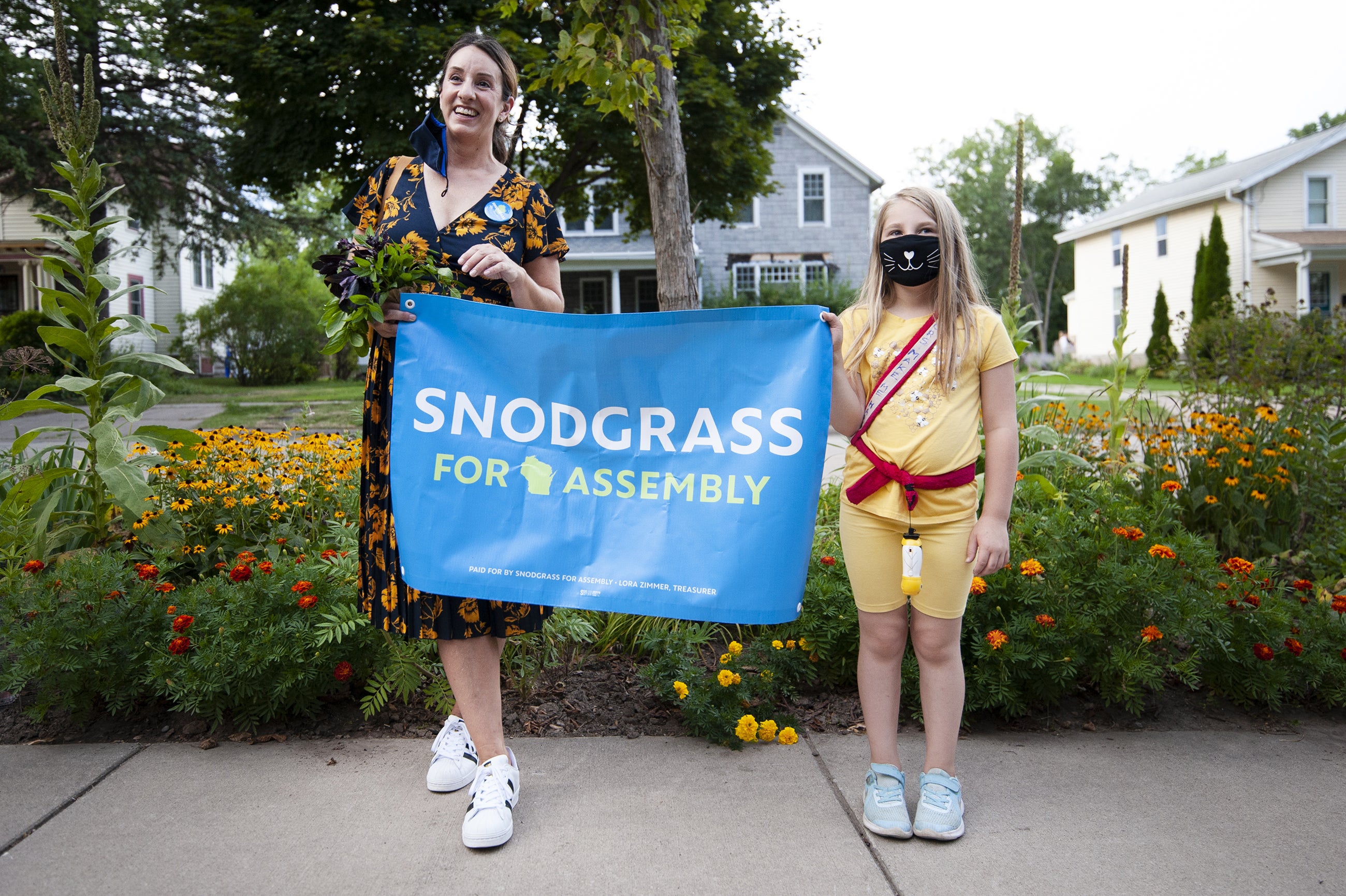 Lee Snodgrass, left, stands with eight-year-old Mae Gerwe as they stand on a sidewalk during a campaign event Wednesday, Aug. 12, 2020, in Appleton. Snodgrass is running for a seat in the Wisconsin State Assembly. Angela Major/WPR

In mid-August, Snodgrass hosted a unique political fundraiser. "Pollinators and Politics" was a walking tour of some of Appleton's gardens and backyard beehives, led by Lawrence University biology professor Israel Del Toro. A group of about a dozen supporters wore masks and kept their distance on the walk as they learned about bees and ate cookies provided by the candidate.

"We have had to be really creative about how we gather," Snodgrass said. "We were just laughing the other day about how the 'fun bar' is really low these days — so things like this, that maybe people wouldn't have showed up at usually, they're really interested in doing now." 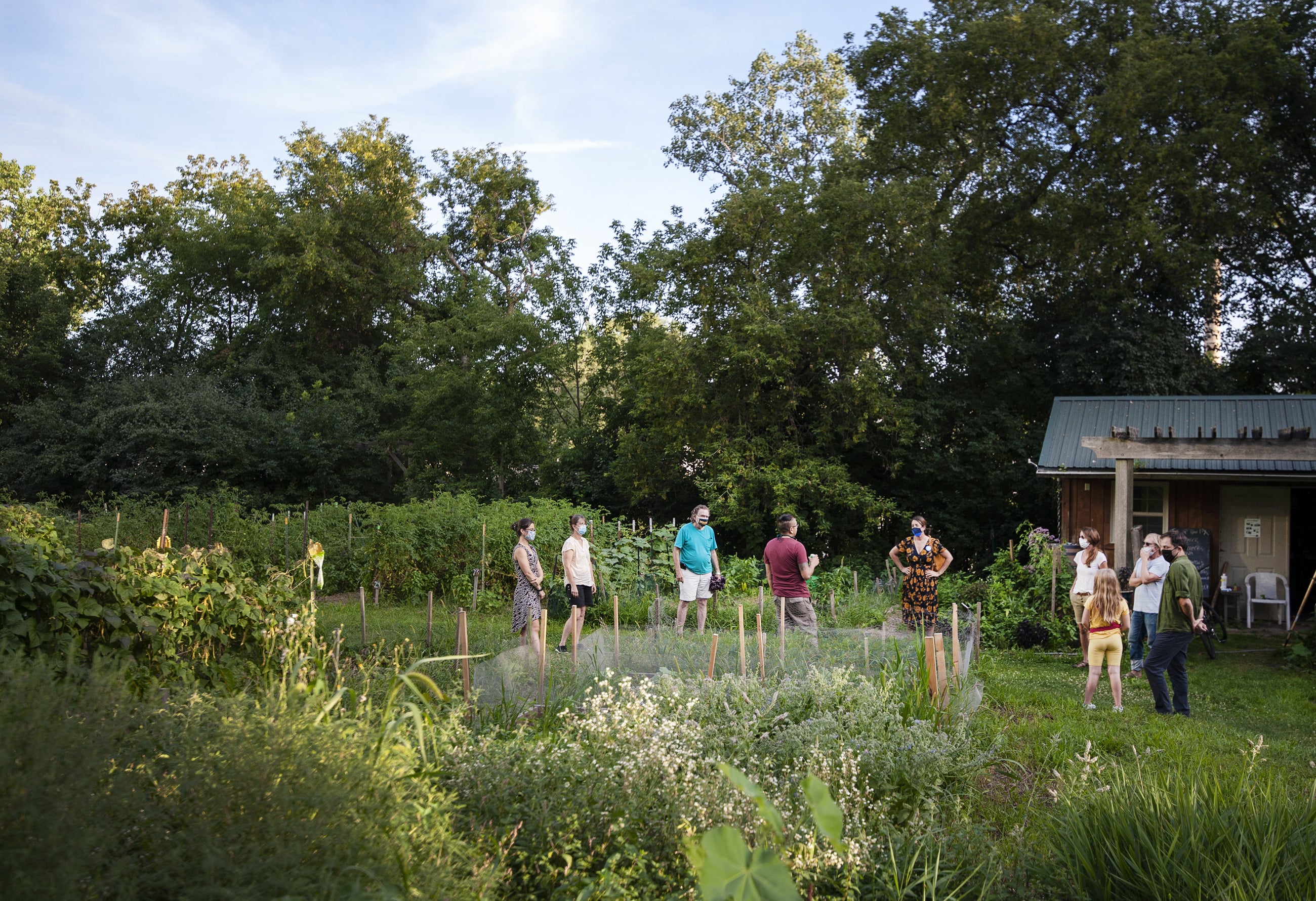 A group of people at a campaign event for Lee Snodgrass stand in a circle while learning about bees and pollinator gardens Wednesday, Aug. 12, 2020, in Appleton. Angela Major/WPR

GOP Criticizes Biden For Not Coming To Wisconsin As Trump, Pence Visit Frequently

In his speech at the Republican National Convention, Trump said his party condemns "in the strongest possible terms ... the rioting, looting, arson and violence we have seen in Democrat-run cities like Kenosha." Less than a week later, he visited Kenosha, where he met with police, surveyed damaged buildings and blamed violence in the city that followed the police shooting of Jacob Blake, a Black man, on Democratic mayors and radical leftists. 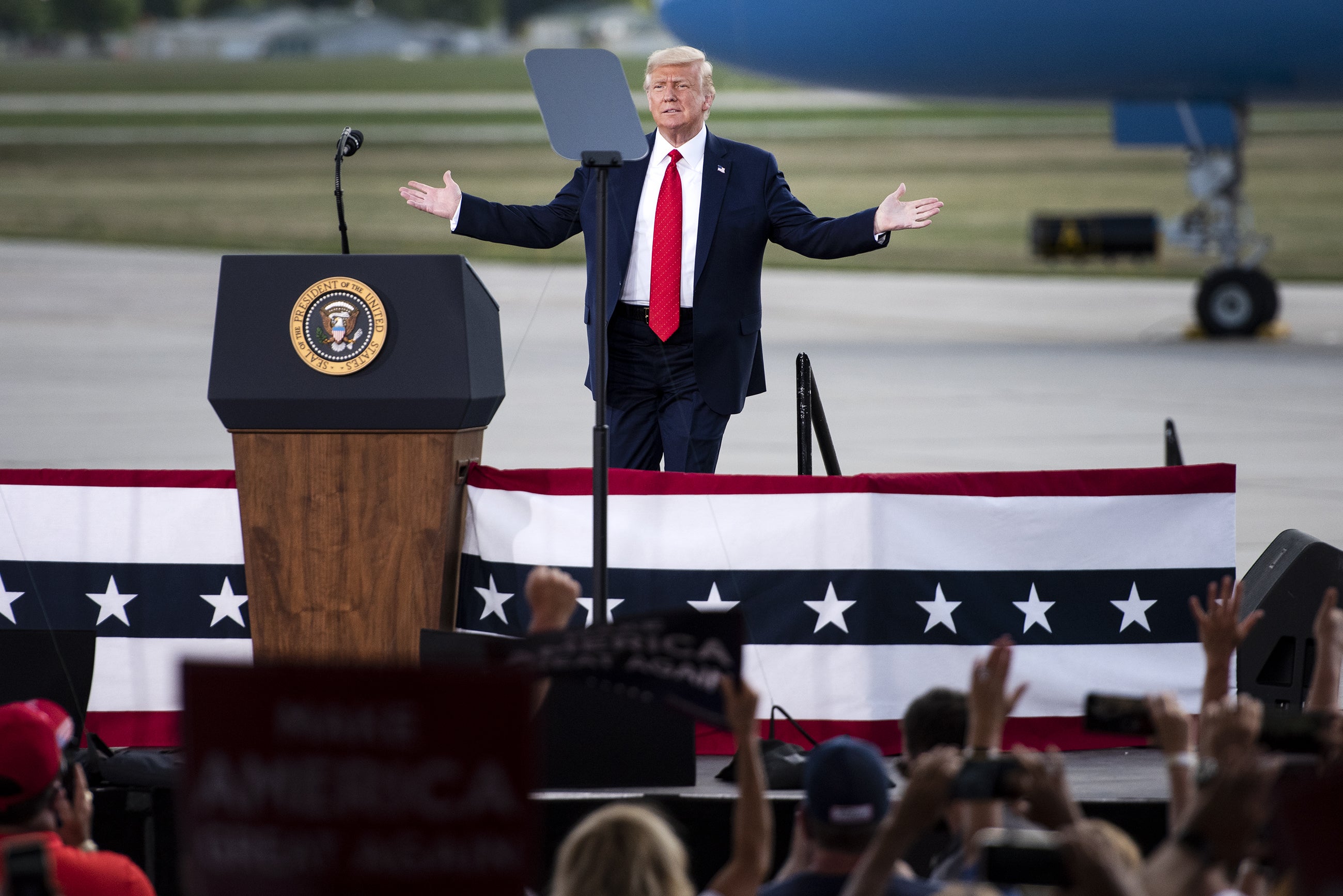 President Donald Trump approaches the lectern during a rally in Oshkosh on Monday, Aug. 17, 2020. Angela Major/WPR

The message was in line with Trump's national appeal. The location was consistent with his campaign's political strategy. It was the sixth time Trump or Vice President Mike Pence had appeared in Wisconsin this year. The contrast between the Republican and Democratic tickets has been one Republicans are eager to point out. Ahead of the all-virtual Democratic National Convention that was originally set to take place in Milwaukee, Republican Party chairman Andrew Hitt said Biden was "hiding from Wisconsin" and "just completely mailing it in here."

But two days after the president went to Kenosha, Biden made his own visit to the city. He met privately with Blake's family, and spoke and heard from community leaders at a local church. Masks were required at the event and attendance was limited to a couple dozen people.

It was the campaign's first visit to Wisconsin in the 2020 election cycle. Given Wisconsin's status as one of the nation's most closely divided swing states, it may not be the last. 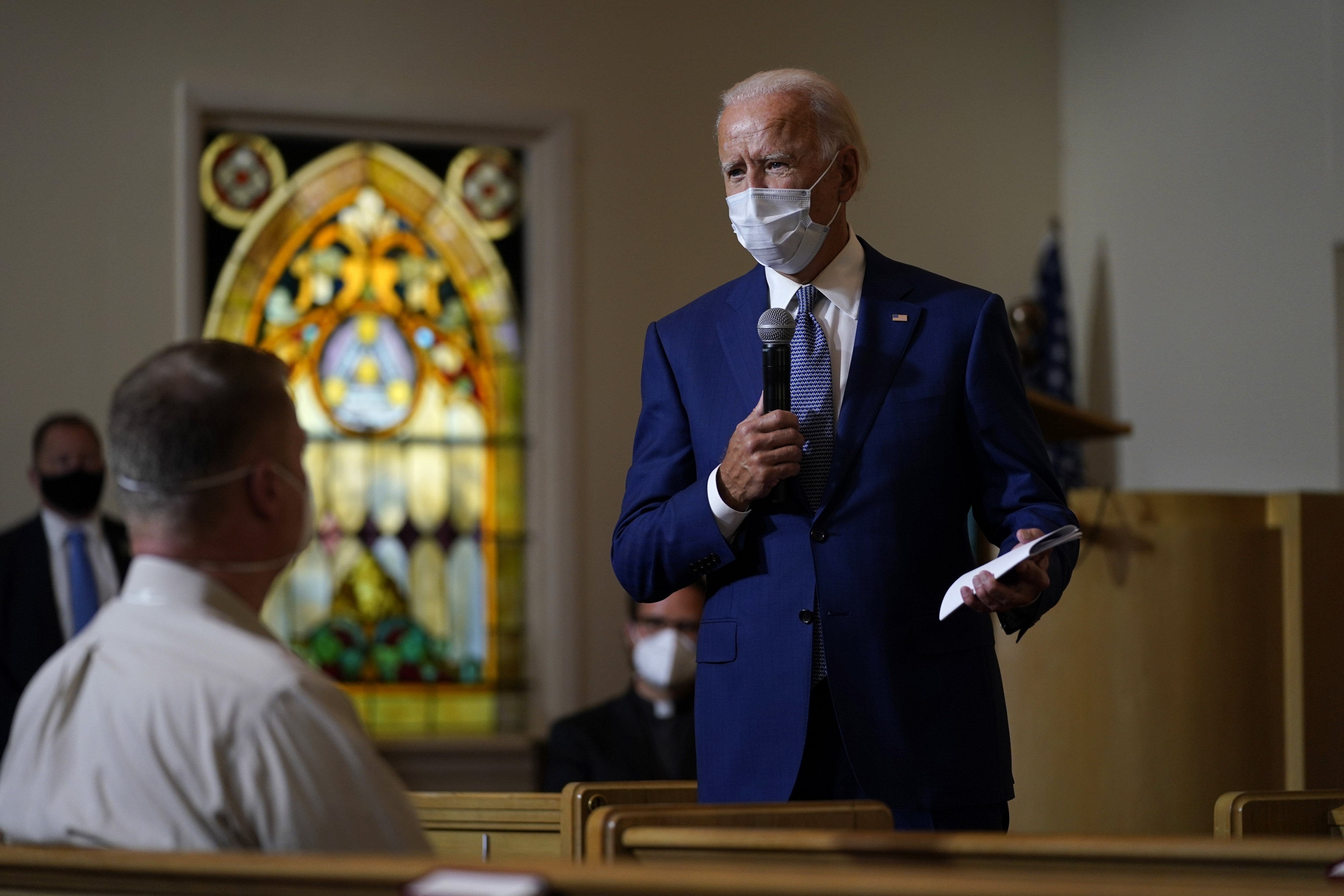 In races farther down the ballot, Zoom discussions and outdoor meetups proliferate, and there will be more of them in the next two months — as well as more in-person events. A Madison Democratic Assembly candidate, Francesca Hong, a chef, announced on Thursday that she will be part of "socially distanced and masked up COOKING campaign events" with six other Assembly candidates around the state.

Candidates at all levels have to weigh the risks of turning voters off with behavior that can be perceived as reckless with the benefits that come from old-fashioned voter contacts. And they'll balance the efficacy of their online organizing with the need to reach new voters face-to-face. The election in Nov. 3.

"I would love to be able to take it for granted," Snodgrass, the Appleton Assembly candidate said. "It would make my life a lot easier if I didn't have to work to win this seat."