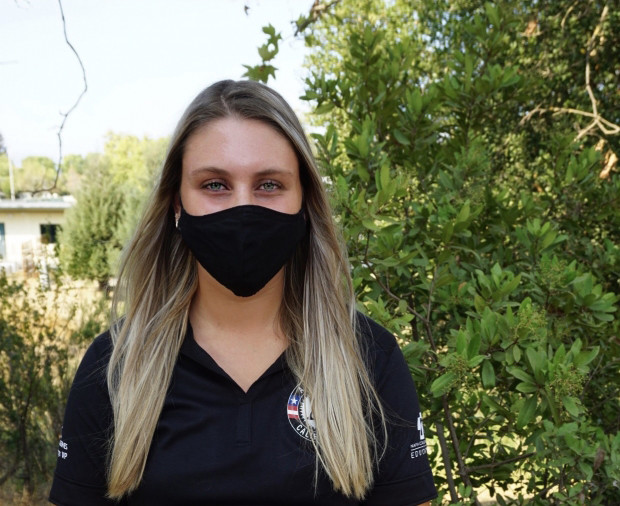 Amy Shircel, 22, became very sick from COVID-19 and warned others about the virus on social media while a student at UW-Madison. Shircel now lives and works in California, where this photo was taken, before she began working at a nonprofit called Farm to Pantry in Sonoma County. Photo courtesy of Amy Shircel

For Patients And Public Bodies Alike, Making COVID-19 Information Public Can Be Controversial

Some COVID-19 Patients Have Reported Facing Backlash After Their Diagnosis Is Made Public
By Shamane Mills
Share:

Sharing information on COVID-19 spread is a critical part of fighting a pandemic: It alerts a community to infections, and keeps others healthy. But thanks to privacy concerns and public perception of the disease, the question of how much information should go public is a contentious and complicated one.

That was evident earlier this month when the state's biggest business lobbying group, Wisconsin Manufacturers and Commerce, filed a lawsuit to keep the state from publishing the names of businesses with COVID-19 cases. The business group said it did so to prevent the violation of COVID-19 patients' privacy rights.

But even for individuals, the choice to make a diagnosis public can be met with backlash.

Both a northern Wisconsin teenager and a recent UW-Madison graduate recently faced public scrutiny after getting diagnosed with COVID-19. One revealed her illness; the other did not. Both got unwanted attention when others found out about their diagnosis.

UW-Madison student Amy Shircel announced on social media she had the illness back in March, when very little was known about coronavirus. Shicel, who was then 22 years old, wanted to warn other young people they could be vulnerable to the virus, which kept her bedridden for two weeks with a fever, dehydration and extreme fatigue.

"I honestly have never been that sick in my life. And I hope I’m never that sick again," she said.

While most of the feedback Shircel received was positive, some wasn’t.

"People were like, 'She only got it because she’s too fat.' 'She’s too lazy, that’s why she’s sick.' Really mean stuff," said Shircel.

Shircel, who now lives and works in California at the nonprofit Farm to Pantry, was open about her COVID-19 status, her name and her Wisconsin hometown, Kenosha.

In the Bayfield area, a teenager diagnosed with COVID-19 and her family faced harassment even though her identity was not made public.

When Bayfield School District had its first known case of COVID-19 in March, officials notified parents, students and staff by text, telephone and social media that a high schooler was infected. The gender, grade or name of the individual was not shared, said Steve Weld, an attorney who represents the school district.

That's because when health officials or school districts announce infections, they can’t reveal information that will identify the person. But in small communities, where people are likely to know one another, word can spread.

"Bayfield, like most communities in northern Wisconsin, is small. Frankly, it didn’t take Dick Tracy to figure out who was involved," said Weld.

Information released by the county that the young person had recently traveled to an area where there was community spread of COVID-19 made it all the more easy to narrow down who the individual was.

Public Health Director Sara Wartman said she later found out the family was harassed on Facebook and at their home by people wanting to know if they were quarantined.

"Had I known that as it was happening and been made aware of it, I could have made some actions to protect the family — potentially offered to have the family or the person be put in a hotel room for their safety," Wartman said. 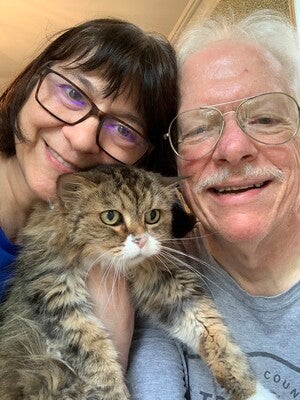 Paul Pratt is pictured with his spouse Denise Chrysler and their pet cat Marbury in this May, 2020 photo, two months after he became ill with COVID-19.  Photo courtesy of Denise Chrysler

School districts and public health departments are both subject to laws that allow them to alert the community about infectious diseases while trying to maintain as much privacy for the individual as possible.

"With students, and especially students in elementary and high school, it's extremely sensitive. Whether COVID-19 should have stigma or not have stigma, it does have stigma," said Denise Chrysler with the Network for Public Health Law.

Chrysler and her husband, Paul Pratt, both of whom live in Lansing, Michigan, experienced that stigma firsthand. When Paul was diagnosed, "he suddenly had cooties and I had cooties," she said, describing others' reactions to the news.

"It was very hard to have to experience, but we decided that we were not going to try to hide it," she said.

Bill Lueders with the Wisconsin Freedom of Information Council said how people perceive COVID-19 has changed as more people get the disease. He thinks positive cases at businesses and schools should be publicized.

Since the initial case was reported at the Bayfield school, the county has reported a total of 131 cases in the community as of Friday. As with the rest of the state, those cases originated at workplaces, family gatherings and sports events.

Often, it’s a local health department or school that will alert those who might have interacted with someone who tested positive for COVID-19. But one of the obstacles contact tracers face is hesitation to admit where people may have been infected, especially in the case of parties or other situations public health officials advised people to avoid.

This summer, Public Health Madison & Dane County tried to reassure those who tested positive that they wouldn’t "judge" where and how they may have contracted it.

We have seen an increase in people with COVID-19 not sharing close contacts. It’s important you share this so we can get the right info to them! Your contacts need to stay home for 14 days; it’s not enough for them to get tested. We don't judge, we just want to prevent COVID-19! pic.twitter.com/i7k9j20TlB

Meanwhile, those who voluntarily come forward, like Amy Shircel, may receive a reaction they don't want to or expect. But she said she wouldn't do anything different — after all, she doesn't want anyone else to suffer like she did.

Paper mill closures drove a bust for Northwoods loggers, and some are leaving the industry
Nursing home deaths from COVID-19 are rising again in Wisconsin and other states
Wisconsin police departments were already struggling to draw and keep officers. Calls for accountability have made it even harder.
Lawmakers propose bill that would allow leasing of solar panels in Wisconsin
Wisconsin Assembly Speaker Robin Vos says 2020 election may have been 'tainted,' but Biden won