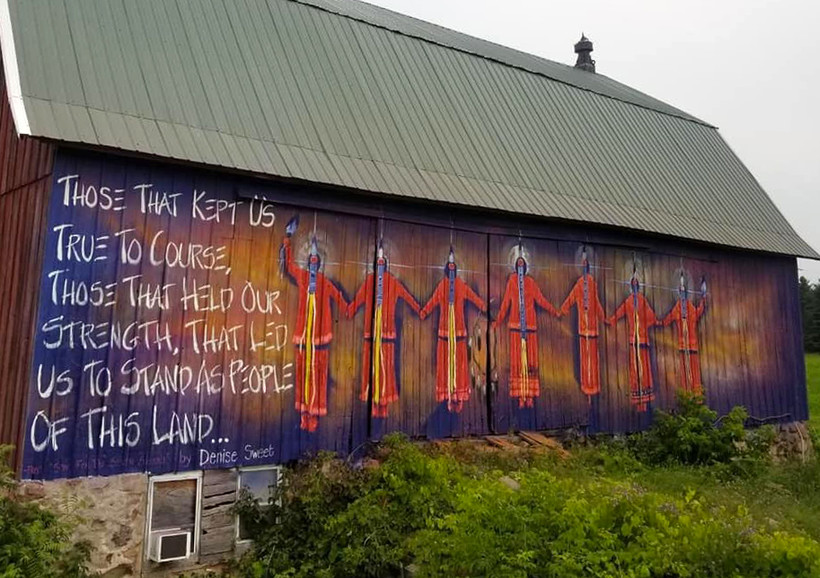 Christopher Sweet was wowed by the words he read in a poem written by his cousin, former Wisconsin Poet Laureate Denise Sweet, in celebration of women's suffrage.

"A Song for the Seven Sisters," referencing the Pleiades constellation, is a poem that pleads for the voices of women to be heard. Denise Sweet wrote it as a muse for a mural that Christopher Sweet was about to paint.

"As a Native artist, I envisioned seven Native women hand-in-hand in reference to those stars and I just pictured them out in the galaxy and I saw the constellations that were lighting them up," he said. "That's what jumped in my head."

Sweet took that idea and spray-painted it, along with one of his cousin's stanzas, on the side of a barn in rural Portage County where it's now visible to road and foot traffic.

The mural is part of a project started by the nonprofit CREATE Portage County, a center for arts and culture advocacy in central Wisconsin. The project, titled "Paint the County," sets artists up with businesses and others who want murals painted on their buildings. It began in August 2020 with a goal of providing some financial relief to artists during the pandemic.

"One of our biggest points of pride is that we will significantly alter the storyline of who art celebrates and who is painting that art across our county," Wright said. "Our project will install the first Filipino, Black, Latinx, HMoob, Ho-Chunk and queer pieces of art in Portage County."

"It's resonating throughout the nation," Sweet said. "As big as it's gotten, it's kind of overwhelming, but awesome."

Another mural by artist Xee Reiter at Point Market tells the story of the Diaspora of Hmong refugees.

Thirteen locations in total will be brightened by murals that are all expected to be completed by the end of September. CREATE received about 75 artist applications from which a selection committee chose 13, Wright said. Ten of the artists selected live in Wisconsin and 12 have ties to central Wisconsin.

Modeled after New Deal-era programs that sought to employ people during the Great Depression on public works projects, Paint the County compensates artists for their public work during a time that's been particularly tough on the arts.

Stephon Kiba Freeman was all set for one of his busiest summers as a full-time artist, with plans to attend more than 20 art shows between April and September. He sells his work at the shows, returns home to Stevens Point to paint and restock and then repeats weekly.

But the COVID-19 shutdowns meant all of those shows were canceled.

Kiba Freeman was able to make up some of that lost revenue through commissions and by being one of the artists selected to create a massive spray-painted 94-by-20 foot mural on the side of Worzalla publishing's building. The painting is an homage to his daughter, Soraiya's love of reading and the whimsical ways in which she sees the world. 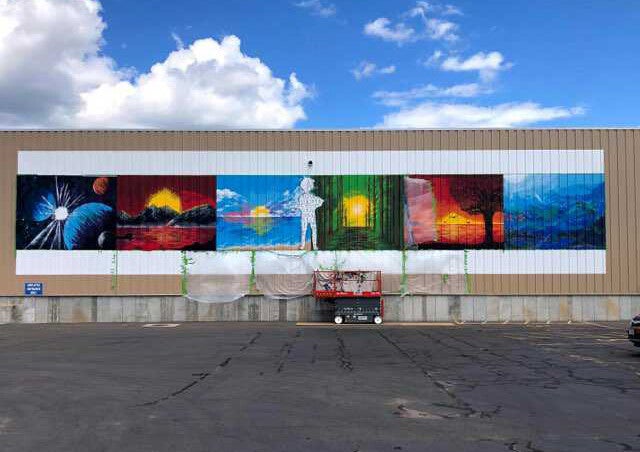 Artist Stephon Kiba Freeman's mural is painted on the side of publisher Worzalla's building in Stevens Point. Kiba Freeman, who's Black, said he didn't spend too much time thinking about his own heritage while creating the piece. He acknowledged that although he doesn't see himself reflected in public or corporate art, it's important that his daughter has a different experience. "I don't necessarily think about my mural as for myself but more for my daughter, and representation for my daughter is important to me," he said. Photo courtesy of Greg Wright/CREATE

Wright said the artists are paid by CREATE in stipends funded with grants from the Wisconsin Economic Development Corp.'s "We're All In" COVID-19 relief fund and Arts Wisconsin's Creative Workforce Program. Those grants total more than $75,000.

Since the project began, six new public art pieces have been completed, including at the HH Bridge by Thielking-Brunetts, at Old Central Waters by Jason Tetlak, and at Reiter's piece.

Seven others are in progress or will be started soon, including at Falcon One Stop convenience store in Amherst, McZ's Brew Pub in Rosholt, Father Fats Public House in Stevens Point and Adelante Cafe in Almond.

After this year's project concludes, Wright said CREATE will work on extending the project into next year with a new slate of artists and more primed canvases.

Businesses interested in having murals painted on their buildings can contact CREATE, where the committee pairs them with an artist.

Artists who submit applications to paint are asked to estimate cost and lay out the ideas for their murals. They can submit for specific projects and multiple locations for review by committee. 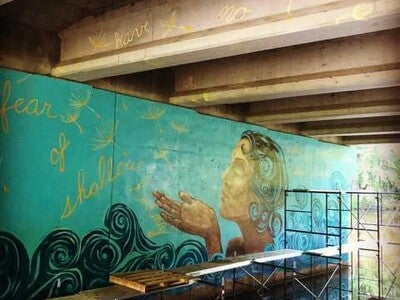 A mural under the HH Bridge was painted by Thielking-Brunetts and features a quote from Anais Nin: "I must be a mermaid. I have no fear of depth and a great fear of shallow living." Photo courtesy of Greg Wright/CREATE

Eight of the murals, including Sweet's piece, are being created in partnership with the Women's Suffrage Centennial Commission, the National Endowment for the Arts, Arts Midwest and the Wisconsin Arts Board to celebrate the 100th anniversary of the 19th Amendment that gave women the right to vote.

These murals feature quotations by women who have faced adversity.

"I just want (the mural) to convey the power of the women and (that) their voices need to be heard," Sweet said.