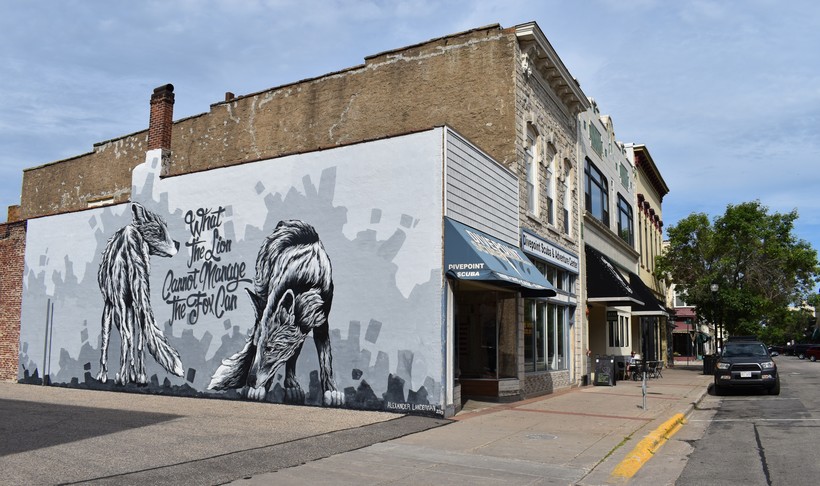 A mural by artist Alexander Landerman has become a popular Instagram spot in downtown Stevens Point. The nonprofit CREATE Portage County, which funded the mural, plans to give grants to artists to create murals in small towns in the area. Rob Mentzer/WPR

'Paint The County' Will Focus On Rural Communities in Portage County
By Rob Mentzer
Share:

A new grant program in central Wisconsin will employ artists to paint murals in rural parts of Portage County. It's inspired by New Deal-era employment programs, and designed to help put artists who've been affected by the pandemic back to work.

"Paint the County" is a new project by the nonprofit CREATE Portage County. They've identified five sites for the murals so far, and have opened applications for artists interested in creating them. Over the next year or so, CREATE will use grant funding of between $50,000 and $100,000 to pay the selected artists to create the murals, said Executive Director Greg Wright. The funding comes from the Wisconsin Economic Development Corp. and Arts Wisconsin, with state money through Wisconsin's "We're All In" COVID-19 relief funds. It's intended to help support artists, and also to create work that will be meaningful to small towns in the area.

"Part of this for us is trying to figure out how to use the arts to give people hope and excitement during this time," Wright said.

The performing arts have been largely shut down for months as a result of the pandemic, which makes gatherings in concert halls, theaters and other indoor spaces relatively high-risk. But visual artists have lost work and income, too, Wright said. Many galleries are not open. People who buy art or support creative nonprofits may be reluctant to spend given economic uncertainty. And many artists have seen freelance or other work dry up.

The nonprofit Americans for the Arts estimates a loss of $10.2 billion nationally to nonprofit arts organizations. Artists surveyed by the group reported they expect to lose an average of $22,100 each in income in 2020. Sixty-one percent said they had experienced a "drastic decrease" in creative work.

Wright said the grant funding for the local program aims to provide a living wage for artists for about two months of work. The amounts of individual grants will depend on the nature of the project; artists are asked to submit a budget as well as creative plans. A panel of judges from CREATE will determine awards, along with the property owners where the murals will go up.

CREATE has previously spearheaded several mural projects in downtown Stevens Point. For this project, they intentionally looked at options outside the city.

The downtown murals "helped change the feel of the downtown in a way that gives Stevens Point new energy," Wright said. "We wanted to see that same thing happen in other places. We're not just proud of Stevens Point. We're proud of Amherst, and Nelsonville, and Junction City, and Custer and these other small communities around us that have cool art scenes and unique innovators."

CREATE has secured sites in Plover, Junction City, Rosholt and Park Ridge, as well as one site in Stevens Point outside of downtown. Wright said they're working on more sites as well and may continue to expand the program. They'll take applications on a rolling basis, with no fixed deadlines yet determined. Wright said he hopes at least one mural can go up this fall, but it's likely that most of the work will happen next spring and summer.

Wright has high hopes for the impact the project can have. "Especially in some of these small and rural places," he said, "when people realize they can pull off really creative things, it does a lot to shift the energy of those communities."