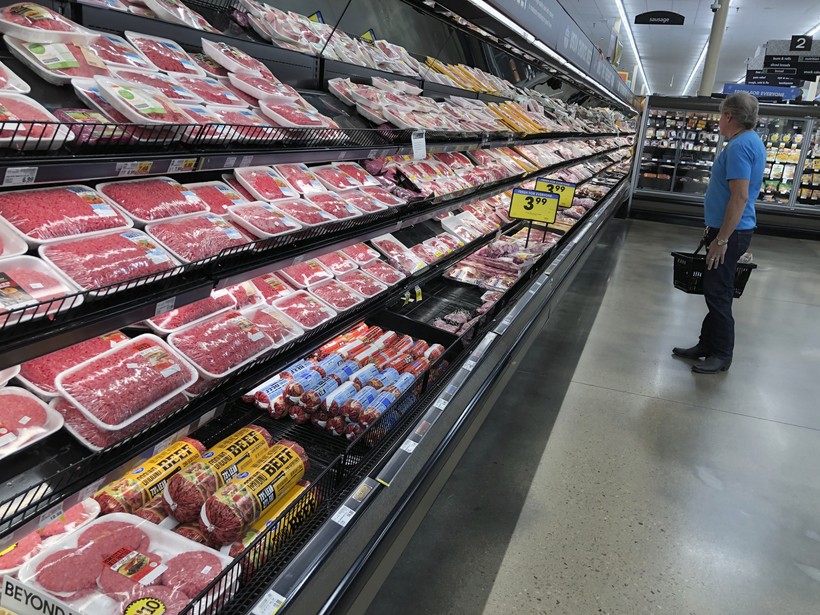 A shopper surveys the overflowing selection of packaged meat in a grocery store early Monday, April 27, 2020, in southeast Denver. With closures in meat processing plants across the country because of the spread of the new coronavirus among workers, food analysts are forecasting shortages of beef, pork and poultry on the shelves of the country's supermarkets in the days ahead. David Zalubowski/AP Photo

President Donald Trump has ordered meat processing plants to open amid growing concerns about meat shortages and despite thousands of workers at meatpacking plants across the country, including in Wisconsin, becoming ill due to outbreaks of COVID-19.

The most notable spike in Wisconsin cases has been in Brown County where two Green Bay meatpacking plants have employees who have tested positive.

The New York Times reports Green Bay has the second-highest daily growth rate of coronavirus cases in the country, with cases doubling every 2.9 days.

There are also sickened workers at meatpacking plants in Denmark and Cudahy.

Salm Partners in Denmark had 35 confirmed cases as of Wednesday out of about 600 employees, according to the company. In a press release, the company said "there has been no confirmed evidence that individuals contacted the virus in the workplace."

The Smithfield Foods plant in Cudahy had 33 cases as of Wednesday out of about 1,300 employees, according to the city's health department.

The meatpacking sites in Green Bay, Denmark and Cudahy and pizza crust manufacturer TNT Crust in Green Bay and frozen food producer Birds Eye Foods in Darien have been under investigation by the Occupational Safety and Health Administration (OSHA) since people began getting sick.

JBS Packerland and Smithfield Foods have shut down temporarily.

"It's important that processors of beef, pork, and poultry ("meat and poultry") in the food supply chain continue operating and fulfilling orders to ensure a continued supply of protein for Americans," the order reads.

Following Trump’s order, OSHA and the U.S. Department of Labor released guidance to employers for reopening their sites.

"To the extent employers determine that certain measures are not feasible in the context of specific plants and circumstances, they are encouraged to document why that is the case," OSHA states.

Claire Paprocki of Brown County Health said her department is working with the meatpacking plants to make sure they are complying with OSHA guidelines for reopening.

When that happens will be up to individual plants, Paprocki said.

JBS USA released a statement late Wednesday. The company did not specify when it plans on reopening:

The men and women who feed America have gone unnoticed for far too long. The country is now rightly focused on their essential role in keeping grocery shelves stocked and helping feed families across our nation every day. Their health and safety remains our primary focus. To us, they have always been essential. We thank the Administration for acknowledging the important role food companies serve and ensuring that our food supply will remain resilient during these unprecedented times.

"Conversations with each of (the) plants is ongoing, and we continue to assess the situations on an hourly and sometimes a daily basis," Paprocki said. "As long as the three facilities continue to comply with the CDC and OSHA guidance, they will continue to remain open. If we find out they don’t comply, we will issue an order, as long as it doesn’t conflict with the executive (order)."

Some changes that have been made at the plants are greater spaces in break rooms and cafeterias and plexiglass installed in workspaces, Paprocki said.

Jarrett Brown spent 12 years in the food processing industry and worked as a saw operator at a plant in Green Bay. He left in January and now works at a Green Bay paper converting plant. He said the spread of COVID-19 at meat-packing plants has "exposed the companies and the way they operate," namely a lack of concern for employees, and he doubts that federal oversight will be enough to protect workers.

"The Trump administration from the beginning has said the goal is to keep the plants open because they're essential," Brown said. "And they are essential. But the goal should have been to ensure the health and safety of the workers."

Workers on the production tables in the plants work "side by side with other people — sometimes touching them; you're that close," Brown said. "If one person is sick, it's going to be easy for everyone who's around them to become sick."

Some but not all of the jobs on the factory floor could be spaced out, Brown said, but that would mean slowing production lines down significantly, which companies resist doing.

There is currently no evidence linking food or food packaging and COVID-19 transmission, according to the U.S. Food and Drug Administration (FDA).

The group reached out to the governor's office, OSHA and the National Labor Relations Board on April 13 with their concerns.

During his daily press conference Wednesday, Gov. Tony Evers addressed the issue, saying enforcement will be handled through OSHA.