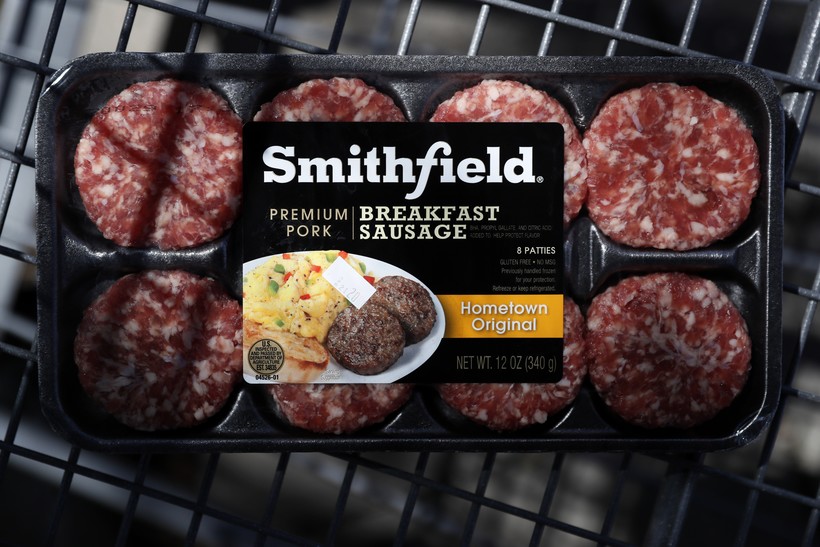 In this April 14, 2020, photo, a package of Smithfield Foods breakfast sausage sits in a shopping cart outside of a local grocery story, in Des Moines, Iowa. The surge of coronavirus cases at Smithfield Foods in Sioux Falls, S.D. has highlighted the vulnerability of meat processing workers, who stand shoulder-to-shoulder on the line and congregate in crowded locker rooms and cafeterias. Charlie Neibergall/AP Photo

Smithfield Foods Inc. is one of several meat-producing companies that have suspended or cut back on production in recent weeks after employees have gotten sick from the new coronavirus. These closures have some worrying the pandemic will disrupt the state’s meat supply.

This week closures began at Smithfield’s pork production plants in Martin City, Missouri, and Cudahy, which is located just south of Milwaukee.

The Cudahy dry sausage and bacon plant will close for two weeks. So far, approximately 28 workers have contracted COVID-19 there, although that number is "constantly changing," according to the plant's union.

Jake Bailey is the production and packing house director at United Food and Commercial Workers (UFCW) Local 1473, which represents about 1,100 people at the Cudahy plant.

He said since the first COVID-19 case was announced on March 26, the union has been working with management to make sure there are temperature checks when employees enter the building, extra cleaning and barriers put up on the production floor for social distancing.

The rolling shut down of the plant began Wednesday and will continue through next week. Minimal crews, including maintenance, will remain to keep the plant from having to fully shutter, but no food will be produced during the two-week closure.

Bailey said there has been mixed feelings among workers about shutting down the plant.

Smithfield is not the only pork producer affected by the pandemic.

According to NPR, JBS USA closed its beef plant in Pennsylvania and reduced production at a second facility in Colorado.

Cargill and Tyson Foods have also closed plants in Pennsylvania and Iowa.

In a statement, Kenneth Sullivan, president and CEO of Smithfield, warned the growing number of shutdowns are hurting the nation's meat supply.

"It is impossible to keep our grocery stores stocked if our plants are not running," the statement said. "These facility closures will also have severe, perhaps disastrous, repercussions for many in the supply chain, first and foremost our nation’s livestock farmers. These farmers have nowhere to send their animals."

Howard Roth is a farmer in Crawford County and president of the National Pork Producers Council. He manages a 3,000 head farrow-to-wean operation, which means he raises pigs until they are 21 days old, or about 15 pounds, and then sells them to another farm. That farmer keeps the pigs until they are about 250 pounds. At that point, the animals are sold to a slaughter house like Smithfield’s Sioux Falls facility.

Once the animals are killed, the meat is sent to another plant, like the one in Cudahy, where it is processed into bacon, sausage or other goods.

Roth said when there is a disruption in the chain, everything gets backed up. His farm can last about seven days, before tough decisions have to be made.

"We’re doing the best that we can to place pigs in different places," Roth said. "I really do not want to kill a pig. The last thing I ever want to do is kill a pig. That goes against everything I believe in."

Roth has already felt the effects of the pandemic. He has gone from getting $44 a pig to $5 or less.

"Right now the plants that are shut down, you are talking about 7 percent of the capacity to slaughter pigs," Roth said. "That’s why it is so important to keep the food chain moving."