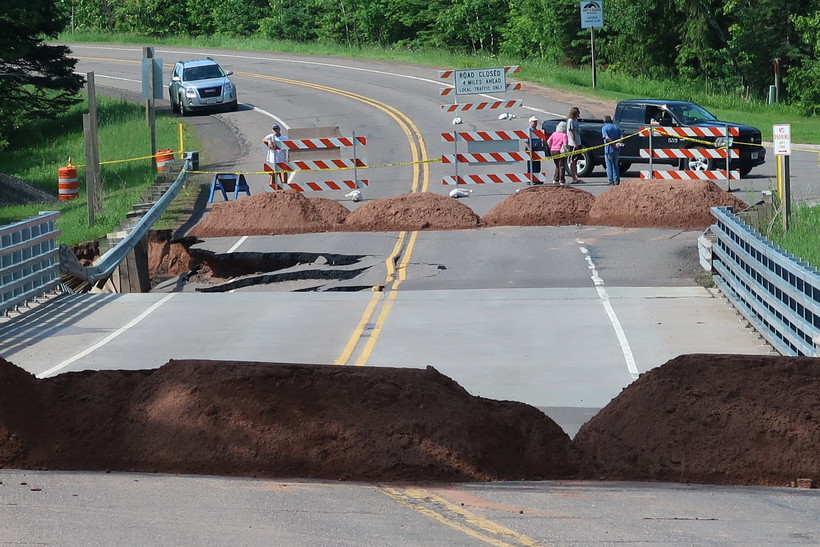 The bridge over the Black River near Pattison State Park in Douglas County was undermined due to flooding over the weekend of June 15-17, 2018. Danielle Kaeding/WPR

6 Counties Sustained Around $13M In Damages
By Danielle Kaeding and Olivia Shalaby
Share: 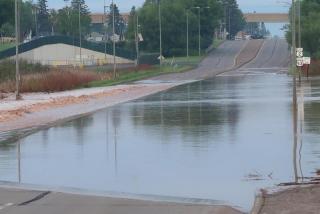 Six counties in northern Wisconsin have received a federal disaster declaration after flooding in June caused roughly $13 million in damages to public infrastructure.

"They’ll be able to recover 75 percent of their expenses to repair the damage to the public infrastructure like the roads and highways from the federal government," Kesler said. "Then, the state will kick in 12.5 percent. So, at the end of the day, the local municipality only has to pay 12.5 percent to repair the roads."

"Some of the things that affected that is we had a couple of big claims that they whittled down because it was very difficult to tell what is the actually cost going to be for repairing a dam," Kesler said.

Flooding caused the Radigan Flowage Dam to fail in Douglas County and caused damage to a dam on the Cranberry Creek Flowage.

"In some of these towns, the loss they suffered on the highways exceeds their annual operations budget," Kesler said.

Jan Victorson, emergency management director for Bayfield County, said local governments have been hoping for federal funds to assist with the recovery.

"Without outside assistance in terms of funding, there are roads that potentially would not be repaired," she said. "To not repair these roads has ... incredible financial impact on our local jurisdictions."

Victorson said the county has around $3.9 million in damage to roads and public infrastructure. She said the next step is getting local jurisdictions together with Federal Emergency Management Agency representatives to develop project descriptions for repairs.

From June 15-19, the heavy rains in northern Wisconsin caused record-breaking flows on the Nemadji and St. Croix rivers. Around 15 inches of rain fell in portions of Bayfield County over a three-day period.