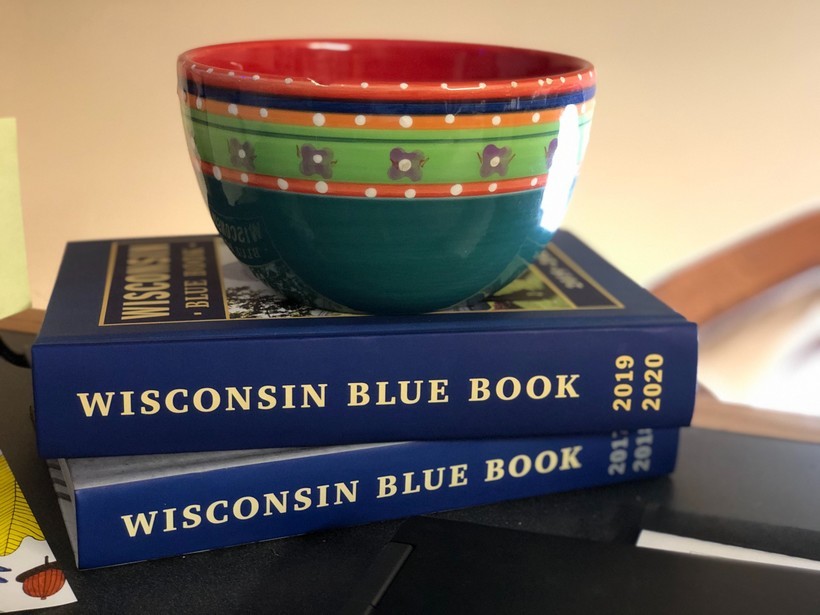 Originally published as a manual for legislators in 1853, the book evolved to include a featured article in each edition exploring a part of state history. Recent editions examined how lawmakers passed veterans bills despite political divisions over World War I and how the state’s first political crisis unfolded in 1856, when two candidates claimed victory in the election for governor.

LRB analyst Jillian Slaight authored both the veterans and political crisis articles and is working on the next edition’s featured article about the history of Wisconsin’s political news coverage. Slaight recently joined Wisconsin Public Radio’s "The Morning Show" to discuss her research, the redrawing of political maps and other curiosities about the state’s "Blue Book."

Kate Archer Kent: Do you know why the "Blue Book" is blue?

Jillian Slaight: Technically it's blue because under state law it must be blue. The spine must be blue. We did get in a little bit of hot water a couple of years ago for going a bit more gray on the cover.

The reason why it's blue, I suspect, has something to do with the book it evolved from, which was a legislative manual. It was a little pocket-sized volume. You can sort of think of it as the equivalent of the smartphone for 1850s legislators. They would keep it in their coat pocket and pull it out to consult it for information.

KAK: The "Blue Book" contains maps of each lawmaker's district, and as we know, redistricting has been tied up recently in the state Supreme Court. Has that delayed being able to put details of the maps into the drafting of the book?

JS: It all depends on whether those maps change again, which is anyone's guess. But the truth is that everything is always changing with the "Blue Book." The issue of maps constantly changing is not something new to us. Every biennium there are special elections called right before the book has to go to print. There are people who are appointed to executive boards last-minute. Legislators' committee assignments are changed. We're pretty accustomed to changing content at the last minute before it goes to the printer.

While the physical "Blue Book" is a great resource, you can also access all of the content on the LRB website. And if perchance the maps change after we go into print, those changes will be reflected on our website.

KAK: Why continue to print physical copies of this book?

JS: We talk about it at least for the past few seasons that I've been around. One of the issues I've worked on as an analyst is broadband availability, and there's still a broad swath of the state that doesn't have access to some of the online resources that we use to compile the "Blue Book." Or people don't have the expertise to know where to find that information. I know it's a handy reference for incarcerated populations who can access all of this current information if they don't have independent access to the internet.

KAK: In the edition you're working on, you are featuring a chapter about Capitol news media correspondents. What’s that about?

JS: In the past, the feature article at the center of each "Blue Book" has explored something unique about Wisconsin history or society, and it often represents the culmination of some work that someone has been doing at the agency and wants to share with the readership. For 2023, we're looking to use the feature article to introduce this larger research project we're doing about the political press in Wisconsin and how it's changed over time.

We're so reliant on the press to understand what's going on in our state governments. And I've always been curious to know what it's like to cover state politics and government, and how that's changed over the past 10, 20, 50 years. How social media has changed that. How different media models and changes in newspaper circulation have changed what it means to cover the Capitol. How the pandemic has changed the job of covering politics.

We're hoping to address some of those questions with oral history interviews with current and past members of the press corps, and then share those findings with people in the 2023 "Blue Book."

KAK: Do other states have a "Blue Book" or are we unique?

JS: Other states do have similar reference books, but I think ours is more robust and really testifies to the fact that we have this robust support structure for the Legislature that provides research and information both to legislators and the public. And the "Blue Book" is sort of a manifestation of that.

A look at Wisconsin's Blue Book 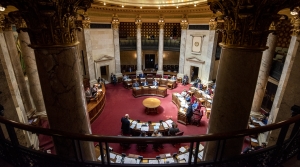 Every session, Wisconsin’s nonpartisan Legislative Reference Bureau compiles the Blue Book, a reference book of nearly all things state government. We talk with a managing legislative analyst about the Blue Book’s significance.