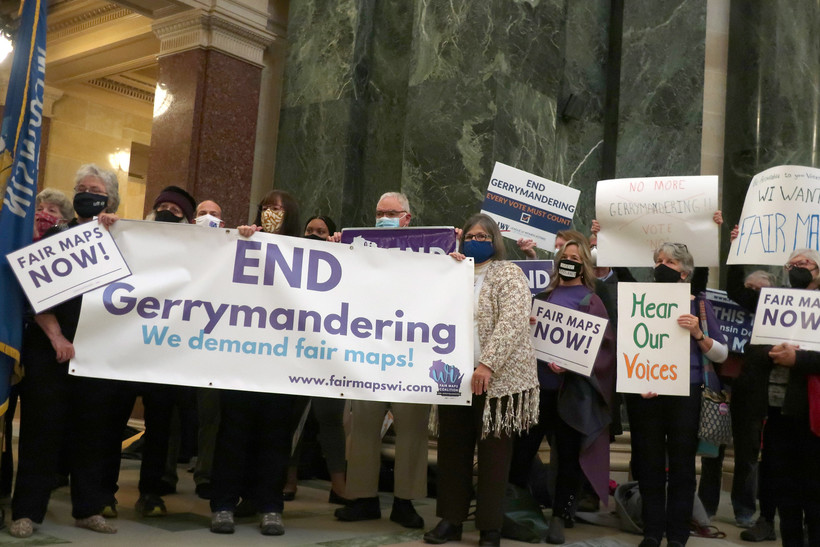 More than 100 opponents of Republican redistricting plans vow to fight the maps at a rally ahead of a joint legislative committee hearing at the Wisconsin state Capitol in Madison, Wisconsin on Thursday, Oct. 28, 2021. Last week, the U.S. Supreme Court threw out the maps a split state Supreme Court established earlier in March. Scott Bauer / AP Photo

Ruling would give GOP lawmakers a better chance at a veto-proof majority in Legislature
By Shawn Johnson
Updated:
Friday, April 15, 2022, 10:40pm
Share:

The Wisconsin Supreme Court has chosen a legislative redistricting plan drawn by GOP state lawmakers, handing Republicans a major victory and giving the party's candidates for the Legislature an even bigger advantage over the next decade.

The court issued its ruling in a 4-3 decision Friday, with swing Justice Brian Hagedorn joining the rest of the court's conservatives to cast the deciding vote.

It was a reversal for Hagedorn, who joined the court's liberals in early March to choose a legislative map drawn by Gov. Tony Evers. But after the U.S. Supreme Court struck down Hagedorn's ruling based on the way it applied the federal Voting Rights Act to draw Black-majority districts in Milwaukee, it sent the case back to the Wisconsin Supreme Court to consider all over again.

In a four-page concurring decision on Friday, Hagedorn wrote that given the directive from the U.S. Supreme Court, the state Supreme Court's options for choosing a new map were limited.

"We could construct one ourselves or with the assistance of an expert, but time and our institutional limitations make that unrealistic at this juncture," Hagedorn wrote. "The remaining option is to choose one of the proposed maps we received as the baseline. Only one proposal was represented as race-neutral in its construction: the maps submitted by the Legislature."

For Democrats, the decision was likely the worst-possible outcome. For the past decade, they've felt the sting of the 2011 map, which Republicans drew when they controlled all branches of state government. Even during years when Democratic candidates have performed well statewide, Republicans have maintained large majorities in the Legislature, thanks in part to a map that political scientists have said is among the biggest partisan gerrymanders in modern U.S. history.

"At a time when our democracy is under near-constant attack, the judiciary has abandoned our democracy in our most dire hour," Evers said. "This is an unconscionable miscarriage of justice for which the people of this state will see no reprieve for another decade."

For Republicans, the ruling likely means another 10 years of running races for the Legislature with a political advantage over Democrats. While a federal court could potentially make changes to the map at some time during the next decade, chances are good that the new Republican-drawn district lines will remain in place until 2032.

"We have thought our maps were the best option from the beginning," tweeted Assembly Speaker Robin Vos. "We appreciate the court's due diligence and are glad to move forward with these maps that make the least changes and comply with traditional redistricting criteria."

Robert Yablon, University of Wisconsin-Madison law professor and redistricting expert, said the court's decision had reinforced a map that was "strikingly" gerrymandered.

"And it means that although this state is often a 50-50 state one where Democrats have frequently managed to win statewide races, they are going to have virtually no chance of taking control of the Legislature," Yablon said in an interview with PBS Wisconsin.

An analysis of the competing redistricting plans by Marquette University's John Johnson found that in a statewide tie, Republicans would be expected to win 63 out of 99 Assembly seats and 23 out of 33 Senate seats under the new GOP map.

In a separate order Friday, the court officially rejected a last-ditch appeal of Wisconsin's new congressional map. That decision, which created a new competitive district in southeast Wisconsin, was a win for Evers.

Wisconsin's redistricting process could have ended more than a month ago before the U.S. Supreme Court took the unusual step of getting involved in Wisconsin's case.

Up until then, Republicans had argued that redistricting is a state obligation, and the state Supreme Court should get the first chance at handling it.

The Wisconsin Supreme Court laid out its ground rules in a 4-3 order on Nov. 30 where Hagedorn joined the rest of the court's conservatives. In that ruling, the court's majority said it would favor a "least changes" approach to redistricting, which all but guaranteed that the eventual map would preserve the Republican-friendly districts drawn a decade earlier.

After several parties proposed maps to the court, on March 3, Hagedorn joined the court's liberals in 4-3 ruling that found Evers' maps were the best example of "least changes" redistricting because they moved the fewest number of voters from one district to another.

But in the same March ruling, Hagedorn made reference to the Voting Rights Act, saying "there are good reasons to believe that a seventh majority-Black district is needed to satisfy the VRA."

On Friday, Hagedorn wrote that he never understood the state Supreme Court to be handling a Voting Rights Act lawsuit, which is typically a lengthy process handled in federal court with the help of voluminous evidence and testimony from expert witnesses.

While there might have been time for such a trial in state court had it started earlier, by Friday, the clock had effectively run out. On April 15, candidates were scheduled to begin circulating nominating petitions to run for the new legislative districts. The trouble was, at least for most of the day, new districts did not yet exist.

Conservative justices said that left them to choose among alternatives already presented to the court, including options drawn by Senate Democratic Minority Leader Janet Bewley and Black Leaders Organizing Communities, or BLOC. The trouble, argued Chief Justice Annettee Ziegler in her majority opinion, is that those maps also drew districts based solely on race without first proving that a race-based remedy was needed. Ziegler said the Legislature was the only party that submitted maps that did not take race into consideration when drawing district lines.

"As a matter of law, the Legislature's maps are superior to the available alternatives," Ziegler wrote. "Under the record presented before us, and with clarification from the Supreme Court, we conclude that the Legislature proposed the only legally compliant maps."

Bradley, the court's most outspoken conservative, wrote a separate concurring opinion where she belittled the governor's map-drawing process with a reference to Star Wars. Bradley also used a lyric from rapper Eminem to take a jab at the dissent, which described the redistricting process as an odyssey.

Justices Jill Karofsky wrote the dissent, which was joined by Justices Rebecca Dallet and Ann Walsh Bradley. Karofsky said the court's majority had ignored a history of racism in Milwaukee, one of the most segregated cities in the nation where Black residents faced racial disparities in homeownership, education, employment, health care and the criminal justice system.

"The fault and responsibility to remedy this systemic segregation lies not with Milwaukee's residents but instead with the government and the society that perpetuated racial redlining and restrictive covenants," Karofsky wrote. "Those practices shaped Milwaukee and that history of discrimination cannot be undone by force of will alone."

Karofsky said the Legislature's redistricting plan had "packed" Black voters into five districts, down from the six under the old map. She said this was a violation of the U.S. Constitution's Equal Protection Clause and the Voting Rights Act.

"Perhaps a court deciding a VRA challenge on a more complete record would reach a different result," Hagedorn wrote. "But I cannot conclude a violation is established based on the record we have before us."

Editor's note: This story has been updated.