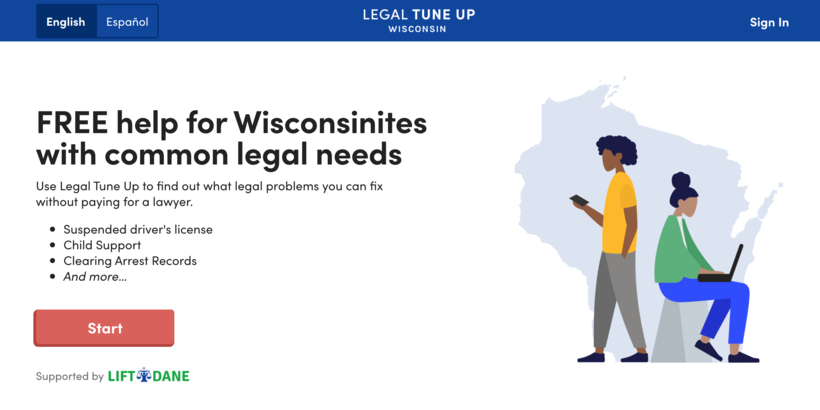 LIFT Wisconsin Aims To Remove Barriers To Housing, Employment That Can Occur With Criminal Record
By Shamane Mills
Share:

Clearing past offenses from a criminal record is a process that can involve waiting in long lines at pop up expungement clinics as people wait to talk to attorneys. But a new, free phone app called the Legal Tune Up tool is trying to make the process a little easier.

Anyone can use the app, which was launched by LIFT Wisconsin this week, to get rid of eligible Wisconsin criminal records by simply searching for their cases, inputting information, and printing all the documents required to file a petition for clearing their record.

"So all you have to do is put your fingerprints on the form, and it will be mailed to the Department of Justice. So it automates the entire process," said LIFT Wisconsin director Marsha Mansfield.

In Dane County, LIFT has an arrangement with the Urban League of Greater Madison and Legal Action of Wisconsin where a person can go to either place, get fingerprints taken and have their documents mailed for them.

One of the first to try the app before it was launched was Courtney Ellington. The 36-year-old Madison resident was at an expungement clinic in Madison where attorneys were able to get a disorderly conduct charge from 17 years ago cleared from her record.

Past misdeeds can create barriers for potential tenants and employees and may prevent some from getting hired or obtaining housing.

Ellington sought help earlier this year while homeless. She has since located subsidized housing for her and her children.

The disorderly conduct charge stems from an incident that happened when she was only 19. Ellington said she was "hanging with the wrong group of friends" and one guy started smashing her car’s rear windshield.

"It freaked the crap out of me. I’m scared. The only thing I could think to do at the time was get the crowbar out of the trunk and chase him away from my car," she said.

She was later arrested and bailed out by her mom. Eleven years later she was diagnosed with bipolar disorder for which she is now taking medication.

Before her diagnosis she had other encounters with police, including a domestic incident in which she said she was arrested after trying to defend herself from abuse at the hands of her oldest child’s father.

That misdemeanor battery conviction remains on her record. It's not eligible for expungement, a process that is limited to only certain offenses that occur when defendants are under age 25.

Wisconsin’s expungement law can make it difficult for people to wipe past misdeeds from public view. In 2018, WPR reported that the Wisconsin Policy Forum found Wisconsin had a stricter expungement law than all of its neighboring states except Iowa.