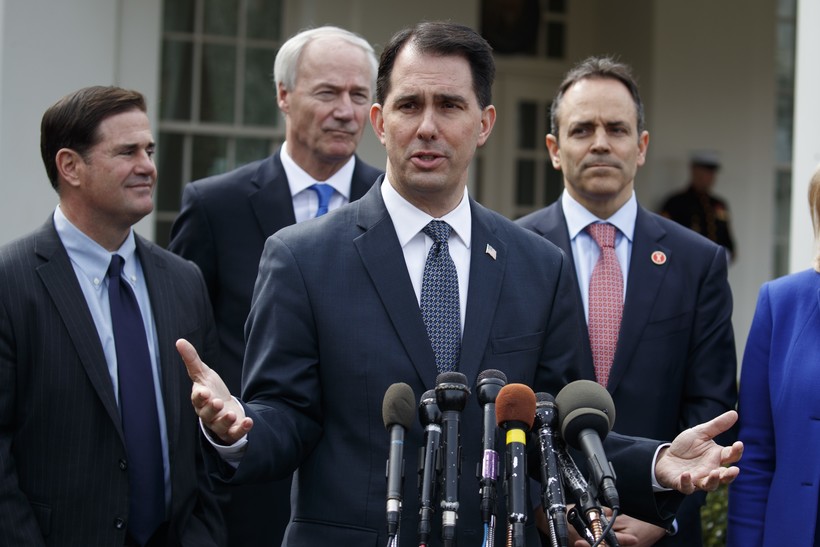 But Walker signals in his first comments on the proposal Tuesday that it remains a work in progress.

"We will continue working with the Trump administration, the Congress and governors across the country," he said.

The Republican plan to replace the Affordable Care Act was released Monday evening.

Parts of the plan include removing the requirement for everyone to have health insurance and Americans would no longer be penalized for not having health insurance. The plan also keeps two popular Obamacare features: allowing people under age 26 to say on their parents' health insurance, and forbidding insurance companies from deny coverage or charging more to people with pre-existing conditions.

Walker — the chairman of the Republican Governors Association, a group with differing views on what changes were needed to the law — has been trying to balance competing needs of GOP governors who want to protect certain elements of the current law.

He's been working closely with the White House and Republican leaders in Washington on the proposal replacing the ACA.

The bill unveiled Monday is a step toward lowering costs and increasing choices for health care, Walker said, adding that the goal is a "personalized, patient-centered plan that treats people as humans and not like numbers."

Walker has also been advocating for a national approach that mirrors what he did in Wisconsin. He rejected the federal Medicaid expansion money, but extended coverage to everyone at or below the poverty level.

One of the biggest things the proposal would do is overhaul the framework of Medicaid, ending its open-ended federal financing. Starting with the 2020 fiscal year, each state would receive a limited, per-beneficiary amount based on enrollment and costs.

The change to a fixed sum — or block grant — have met resistance on several fronts, including the older adult, low-income and addiction recovery communities. Advocates for these communities say it would mean fewer dollars for the poorest Americans.

"I certainly am excited about the prospect of power returning back to the state," Vos said. "But I think it's just too early to tell."

Fellow Republican and state Senate Majority Leader Scott Fitzgerald said he's "worried about what the fallout will be" for Wisconsin and other states under the proposed changes.

Meanwhile, an advocate for low-income people seeking health care in Wisconsin said the proposal overhauling the federal health care law is "not as bad as it could be, but it's pretty bad."

Bobby Peterson is executive director of ABC for Health, a nonprofit Madison law firm that helps people get health care.

Peterson said Tuesday that one of the most concerning elements of the bill is that it would limit total federal Medicaid funding to a formula taking into account enrollment and costs in each state.

For those buying private insurance, tax credits under the Republican plan — called the American Health Care Act — will change.

Obamacare takes family income, local cost of insurance and age into account; while the replacement proposal bases tax credits only on age.

House Speaker Paul Ryan, of Janesville, said the bill will "drive down costs, encourage competition, and give every American access to quality, affordable health insurance."

Marks Dicks said prior to the ACA, there was very little regulation about what insurers could charge in regards to gender or age. Dicks said older adults were sometimes charged 10 times as much as younger people. The ACA allowed insurers to charge only three times as much.

The Kaiser Family Foundation has an interactive map comparing tax credits under the Affordable Care Act and the American Health Care Act.

Editor's Note: This story was last updated at 3:10 p.m. Tuesday, March 7, to include reporting from WPR.