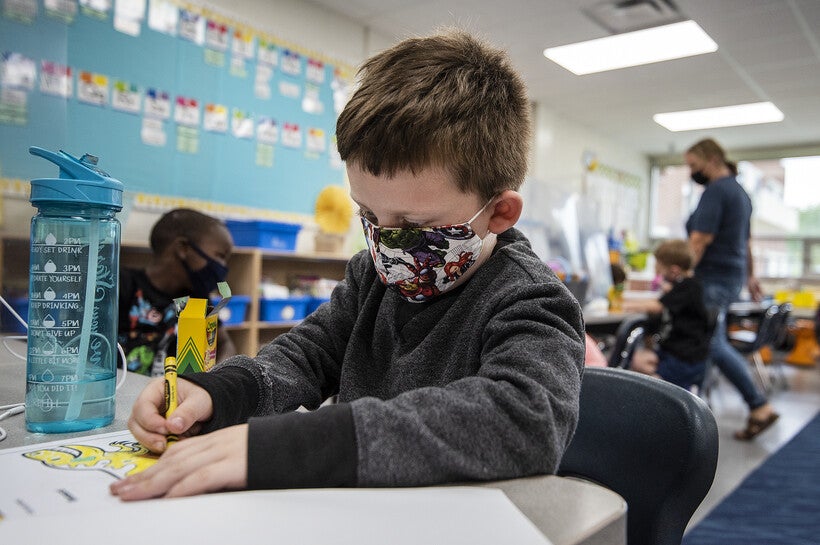 Students and staff can return 5 days after a close contact or first symptoms
By Madeline Fox
Share:

Students, teachers and staff will only need to quarantine for a minimum of five days after a close contact with someone who has COVID-19, and isolate for five days after first showing symptoms, under school-specific guidance released Thursday by the Centers for Disease Control and Prevention.

When the CDC first reduced the quarantine period to five days in late December, its guidance for schools still recommended a 14-day quarantine, with some options to shorten that period based on vaccination status and testing. The agency shortened the recommended quarantine and isolation periods for schools to five days Tuesday evening, but still had conflicting information on its website until Thursday afternoon. The guidelines do require masking for days six to 10 and improvements in symptoms to leave isolation, but they do not require a negative test, much to the chagrin of some public health experts.

For school districts, that has led to confusion about how long students and staff should stay home after a possible exposure, with some schools even sending and then rescinding letters to parents about a five-day quarantine period.

A spokesperson for the Wisconsin Department of Public Instruction said the state health agency will review the CDC's new standards, and if they're approved at the state level, DPI will likely use them to update its own infection control and mitigation measures for schools.

Schools can, in the meantime, make their own decisions about whether to change their policies. The Middleton-Cross Plains Area School District sent an email to families Tuesday stating students who test positive can return to school after five days as long as their symptoms are improving and they are fever-free for 24 hours without the help of medication.

"I was a little frustrated, because I feel like there's a lot of room for interpretation as far as improving symptoms," said Courtney Blake, who has a daughter in first grade in the district. "I feel like that's a really loaded phrase, and could mean a lot to a lot of different people."

Blake said her community, which is included in Dane County's order to mask indoors through Feb. 1, has been generally pretty good about taking precautions. On a recent grocery store trip, for example, she said nearly everyone she saw was wearing high-quality masks like N95s — but she's worried about the ones who aren't, and also about the inherent risks during the school day.

"CDC guidance also recommends that if you're in that six- to 10-day period, and you end your isolation, that you should do things like avoid restaurants and avoid immunocompromised people and wear a tight-fitting mask," she said. "Those are things that kids can't do. They have to take their masks off to eat, and we don't know who's immunocompromised in the schools."

Some districts, including Grafton, Elmbrook, Janesville and Whitnall, have similarly told families they'll be shifting to the five-day protocol. Others are keeping their current quarantine periods for now.

Cassandra Willyard has a 2-year-old in day care and a first-grader in the Madison Metropolitan School District, or MMSD. MMSD hasn't updated its quarantine policy since the new CDC guidelines were released, and will be bringing students back in-person Monday, after starting virtually right after winter break.

Willyard said she's exhausted by the constant shifts in policy and the risk brought on by new variants and growing case counts.

"I just feel like — like all parents — I feel stretched thin and helpless," she said. "There's no good options. I want her in school, but I also recognize we're in the middle of a surge right now."

Willyard said if her daughter tested positive, she probably wouldn't send her back on day six, even with the new guidelines, unless she'd tested negative. She said she's also frustrated with the way the CDC handled the rollout of the new guidelines.

"I don't know what they should have done differently, but I guess clearer messaging, and acknowledging some of the nuances," she said. "I felt that that wasn't even clear from the outset, that it was sort of a trade-off — that they understood some people would still be infectious (after five days), but that they were worried about staff shortages in key fields."

Schools, hospitals and businesses around Wisconsin have had to close, pare down services or turn people away because they had too many people out sick or quarantining. Wisconsin's largest hospital system had to close some clinics, and Beloit schools closed Monday because there weren't enough bus drivers to get students to school.

For some, the confusion over the CDC's new guidelines only adds to mixed messaging that's made it hard for families, schools and other businesses to navigate COVID-19 policies.

Krista Gylund, executive director of Wausau Child Care, said the nonprofit has been fielding questions from frustrated parents confused about conflicting recommendations. Without a mask mandate, students in the school district aren't required to wear masks, but some day cares for younger children require them. Quarantine periods also vary because the state Department of Children and Families, or DCF, oversees child care and DPI handles education, Gylund said.

"There are parents who have children in both places and they're like, 'Why are there two different policies?'" she said. "Well, it's because we have to abide by DCF in our preschool programs — our birth to 5 — but DPI is much different for the school districts, and so it just causes a lot of turmoil in regard to not having a consistent policy."

Gylund said she wishes state agencies, local health departments and schools would work more closely together to create consistent policies. At the same time, though, she recognizes there needs to be some variation to account for different age groups' ability to keep masks on, for example.

"Our children have to quarantine for 10 days, those in close contact, because with littles, they can't mask, or they won't keep their mask on," she said. "For our staff, however, we do ask that they do get tested — if they're (virus) free, then they can come back in five days with a mask on; if they're not, then they have to stay out."