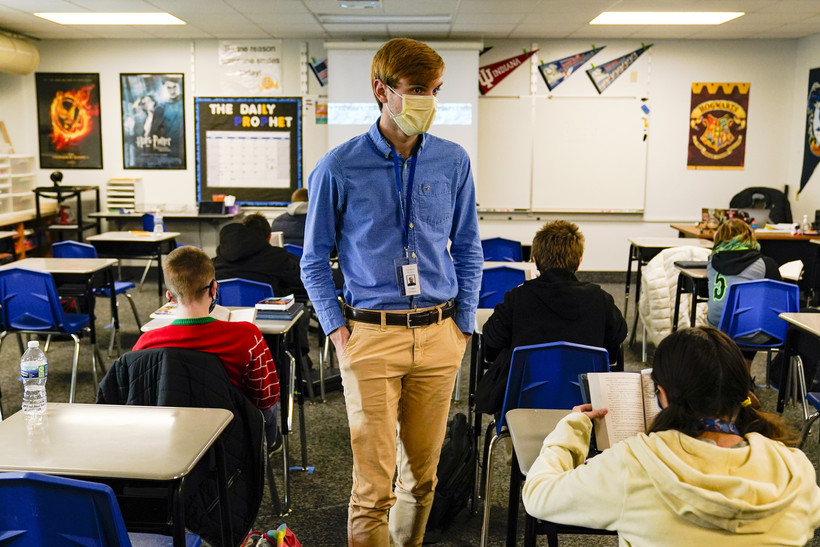 In this Dec. 10, 2020, file photo, Cooper Hanson, a substitute teacher at the Greenfield Intermediate School in Greenfield, Ind., is photographed in a classroom. Michael Conroy/AP

With Wisconsin experiencing a surge in positive cases of COVID-19, the state's two largest school districts will have students start this semester learning virtually.

The Madison Metropolitan School District announced last week it would move the start of the semester to Jan. 6, and that at least the first day would be virtual. Milwaukee Public Schools followed suit over the weekend, announcing its Jan. 4 return to school will be virtual.

Liz Brinnehl, who has a third and sixth grader in Madison schools, said the decision to go virtual was frustrating for families who had to juggle so much virtual learning last school year.

"Somebody joked that there was probably a 200 decibel 'f---' that could be heard across the entire city," she said. "It was just dreading that we'd end up back where we were, where we're doing virtual for the foreseeable future — I think that's what everyone's afraid of, at this point."

Other school districts, like the Racine Unified School District, are extending their winter breaks by a few days.

In Facebook posts and other online discussions, teachers in Madison and Milwaukee noted having enough staff to bring students back in person is a major concern. Last year, when many schools switched from in-person to virtual learning, they cited staff shortages as the tipping point.

Brinnehl said one of her biggest frustrations was not understanding exactly why Madison school officials had decided to go virtual, since she'd heard both that it was because of the high community spread of COVID-19 and staffing shortages. She said if either was true, there was even less clarity on what that actually meant — for example, whether there were temporary staff shortages because many teachers were quarantining, or longer-term pressures because of teachers quitting.

Beloit schools canceled class Monday because of bus driver shortages, and although classes will resume Tuesday, the district warned families there could be ongoing disruptions to kids' transportation.

Brian Benford is the parent of a Madison third grader and a city alder. He said he was frustrated by the district's lack of transparency about what prompted the virtual switch. While he's able to work from home and manage his son's virtual learning, he's also worried about his constituents and other Madison families who can't work from home and have either used up their vacation and sick time on virtual learning or quarantines, or didn't have paid time off to begin with.

"These folks are just going to be hurting, missing work," he said. "There's so many people barely making it as it is."

"There are no 'easy' decisions relative to navigating the COVID-19 pandemic," Madison district staff wrote in an email to parents. "We recognize this decision will have a significant impact on all of our families, especially single parents and essential workers. However, we will continue to leverage our resources to support our families, while working to ensure their safety and wellbeing."