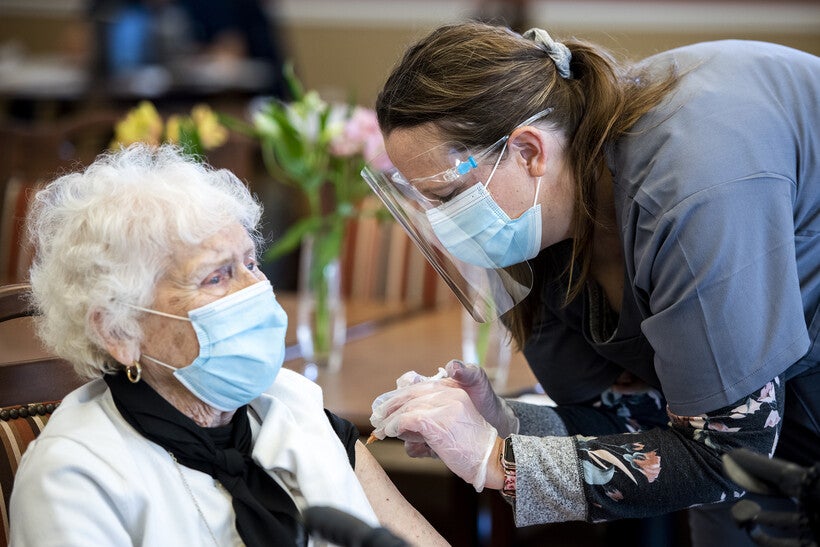 Between Late December And Early February, New COVID-19 Cases At Nursing Homes Were Down 82 Percent Across Country
By Megan Hart
Share:

"There were a lot of tears shed because it just represents hope for all of us," said nursing home administrator Danielle Sigler.

The vaccines give her peace of mind knowing residents are protected, Sigler said. But even though Ingleside completed its third vaccine clinic last week — and Sigler herself has received the shots — things aren't back to normal for residents and staff.

The nursing home has been able to ease visitor restrictions a bit. However, it's still following federal guidelines, Sigler said.

"We're hoping that vaccinations, social distancing, hand washing, PPE — all of those safety measures that we have in our toolbox — will help protect the residents, and we can go back to a more normal life," she said.

On Monday, the Centers for Disease Control and Prevention released updated recommendations for vaccinated Americans, granting them new freedoms. However, federal agencies have yet to share new guidelines for the long-term care setting, even though residents and staff were among the first to be eligible for vaccine in Wisconsin and other states.

"Personally, I'm pushing for opening up visitations more, but we really need to have the blessing of the federal government," said John Sauer, president of LeadingAge Wisconsin.

He said he's hopeful new guidelines will allow vaccinated long-term care residents to socialize, see their families and even get back into the local community.

Sauer said he isn't advocating for long-term care communities to open completely, but he has found recent numbers "incredibly encouraging."

During the course of the pandemic, long-term care facilities have accounted for one-third of Wisconsin's COVID-19 deaths. But between late December and early February, new cases at American nursing home were down more than 80 percent, according to data from the American Health Care Association and National Center for Assisted Living.

"The state and national efforts of saying, 'We're going to get the shots in the arms of nursing home and assisted living residents and staff as the top priority,' is paying off in spades," Sauer said. "It's frankly saving lives, and it is improving the quality of life (for residents)."

Wisconsin's seven-day average for new cases is the lowest it has been since June, according to the state Department of Health Services.

It has been an incredibly difficult year for long-term care workers, Sauer said. Many have taken on new roles, trying to help fill the void residents have felt during isolation, he noted. And of course, residents are missing their families and friends. In July, he lost his own mother, who was an assisted living resident, he said.

"Her death was hastened not by poor care at all. It was really hastened by the fact that she was very social, and at 93 years of age, that socialization, those opportunities were really taken away from her because of the virus,” he said.

Sigler said she is grateful for the families that offered their support and entrusted their loved ones to Ingleside during a scary time, she said, as well as for the local residents who've taken precautions to stop the spread of the virus.

"People have been extremely diligent in practicing all the infection control measures, and at the end of the day, that's what's going to allow our community to reopen," she said.