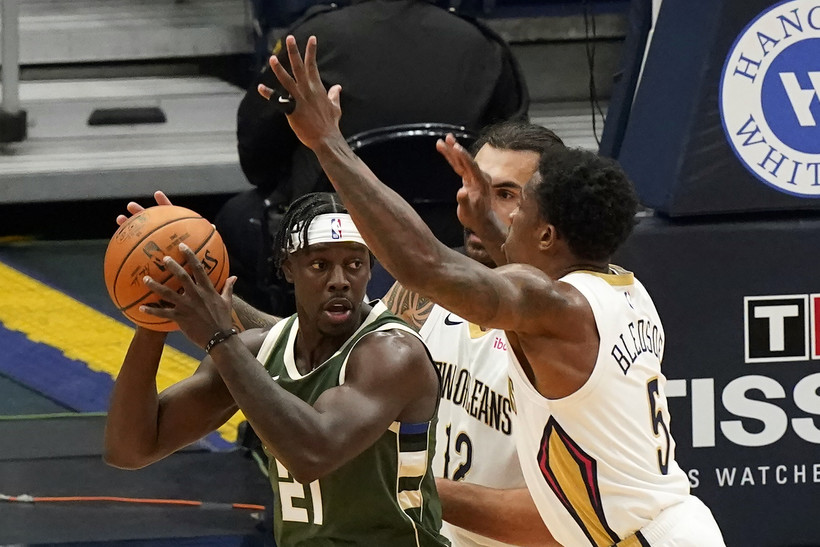 The NBA Season Is Underway. Will This Be Milwaukee's Year?

Antetokounmpo inked the biggest contract in NBA history – $228 million over five years. It’s tough to overstate the impact his decision could have for the Bucks, who open the regular season Wednesday against the Boston Celtics. (Two days later, the Golden State Warriors and the Bucks will play the first Christmas Day game in Milwaukee in more than 50 years.)

Antetokounmpo also had the option of waiting until the end of the upcoming season before committing to Milwaukee long term. In fact, it might have meant more money for the superstar. Supermax deals, like the one Antetokounmpo signed, are determined as a percentage of league’s salary cap, which took a hit this season due to the pandemic.

But on the court, Antetokounmpo has always played to win. And by signing the contract last week, he might have given the Bucks their best shot at doing just that, by taking some of the pressure off.

Milwaukee finished each of the last two regular seasons with the best record in the league, but both campaigns ended with disappointing playoff exits. Last season, the top-seeded Bucks were knocked out of the conference semifinals by the No. 5 Miami Heat in just five games.

At a news conference this week, Antetokounmpo said the Bucks know how to throw the first punch, but one blow won’t take them all the way to a championship. Still, he said Milwaukee doesn’t plan to change its approach to the regular season.

"Basically, what you do in the regular season, you’ve got to carry over into the playoffs, and you’ve got to do it even better," he said.

Antetokounmpo prefers to lead by example, he said. 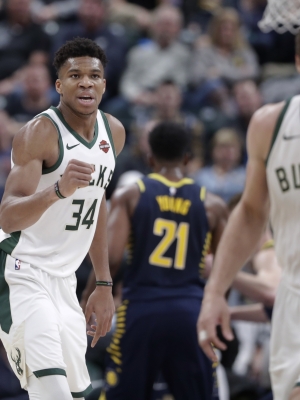 Milwaukee Bucks forward Giannis Antetokounmpo (34) celebrates after an assist on a shot by center Brook Lopez (11) during the first half of an NBA basketball game against the Indiana Pacers in Indianapolis, Wednesday, Feb. 13, 2019. Michael Conroy/AP Photo

But the Bucks will be without a few key leaders from last season, including veteran Wesley Matthews, who signed with the Los Angeles Lakers this offseason. Milwaukee also traded away George Hill, whose voice was prominent during the team’s historic protest of police violence, along with Eric Bledsoe.

As part of the deal, shooting guard Jrue Holiday will join the Bucks.

The former New Orleans Pelican has just one year left on his pricey deal, but the Bucks are a team that’s ready to win now.

A Season Shaped By The Pandemic

NBA play usually opens in October and runs through early June, but the coronavirus has turned the upcoming season on its head.

Unlike the second half of last season, the league won’t play in a bubble, but the pandemic has still changed things.

Obviously, the NBA is getting a much later start this year — the Lakers wrapped up last season’s title around the same time the new season would typically be getting underway. The offseason was shorter than normal, and teams will play 72 regular season games this year instead of 82.

Milwaukee lost the three preseason games it traveled to play earlier this month, and Antetokounmpo said it was strange to be on a road trip amid the pandemic. He wasn’t sure whether players were allowed to leave the hotel or eat at restaurants, but those rules should become second nature during the regular season, he said.

Competition Is Heating Up In The East

There’s no question the West has been the league’s dominant conference over the last two decades. Western Conference teams have won 13 titles in the last 20 years, facing tougher roads to get there too.

While the Bucks, with Antetokounmpo, Holiday and Khris Middleton, are considered favorites in the East, they’re likely to face stiff competition from the Heat and the Celtics. Stars Kyrie Irving and Kevin Durant will join forces in Brooklyn, catapulting the Nets into the conversation. Plus, it could be the year the talented Philadelphia 76ers live up to their potential.