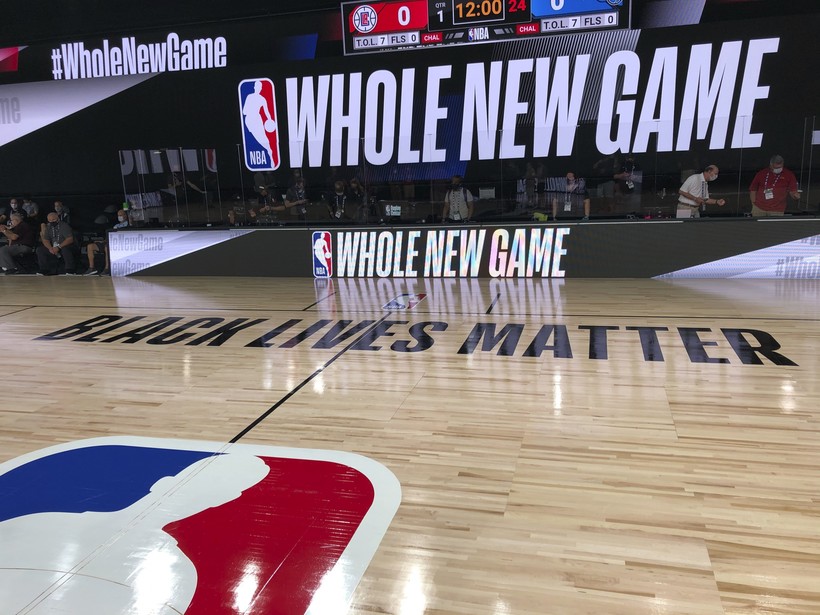 A basketball court is shown at the ESPN Wide World of Sports complex in Kissimmee, Fla., Tuesday, July 21, 2020. The NBA's marketing motto for the restart of the season at Walt Disney World is “Whole New Game,” and in many respects, that’s very true. Tim Reynolds/AP Photo

Life In The NBA Bubble: Bucks To Resume Title Quest Amid Pandemic

The NBA Has Conducted Nearly 700 COVID-19 Tests Inside The Bubble Over The Last 2 Weeks. All Were Negative.
By Megan Hart
Share:

The Milwaukee Bucks are back in action Friday after the NBA suspended its season in March due to the coronavirus pandemic.

Milwaukee is leading the league, but the Bucks won’t get to enjoy home-court advantage at Fiserv Forum this postseason. Instead, the NBA has headed south to Orlando, Florida.

The Walt Disney World campus where teams will live and play over the next 10 weeks has been dubbed "the bubble" by those around the league due to its strict coronavirus precautions.

In contrast to what’s happening in Major League Baseball — the season opened last week and already more than a dozen players from one team have tested positive for COVID-19 — the NBA is hoping the bubble will hold and a champion will be crowned this season.

In the last two weeks, the league has conducted nearly 700 coronavirus tests on players in the bubble. All have come back negative, according to the NBA.

On Life In The Bubble

Several Bucks players said leaving their families amid the pandemic will be the toughest part of the experience.

"I’ve never been away from my family this long ever, and I’m sure a lot of guys can probably say the same thing," veteran forward Marvin Williams said.

Still, players said they’re hoping to stay in Florida through mid-October. That’s when the NBA Finals are scheduled to wrap up.

"I think everybody here is working for one thing and that’s a championship," Williams said.

When the Bucks arrived in Orlando three weeks ago, players were required to quarantine in their hotel rooms until they passed two coronavirus tests.

Reigning MVP Giannis Antetokounmpo said he couldn’t complain. His hotel suite is bigger than the apartment he shared with his four brothers in his native Athens, Greece, he said.

There’s plenty to do in the bubble, players said.

Khris Middleton, George Hill and Donte DiVincenzo went golfing. Brook Lopez and some of his teammates went fishing. There’s a 24-hour lounge where players can play video games or ping pong. Antetokounmpo and his brother even visited a barber in the bubble. 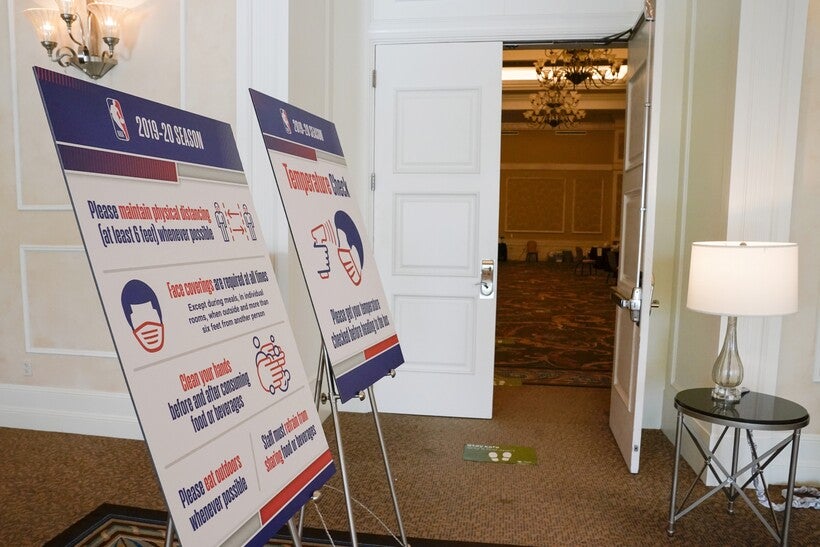 Signs lead to an NBA COVID-19 testing site, Wednesday, July 29, 2020, in Orlando, Fla., where testing inside the NBA bubble occurs several times a week. The world has changed since the NBA stopped on March 11. For 22 franchises, however, there is a goal that remains in place. The NBA, at long last, is officially back. Ashley Landis/AP Photo

Players are tested for the virus every other day. They have the option of wearing smart rings that measure their respiratory and heart rates to help with early detection. And contact with the outside world is very limited.

There's even an anonymous hotline where players can report social distancing or mask violations. The Athletic reports the league has already received a few tips but shooting guard DiVincenzo said he doesn't plan to use it.

"I’m more worried about myself and the guys on our team," he said. "We’re taking every precaution, following all the protocols."

It’s strange to live on a campus with 21 other NBA teams, players said. Many of them know each other well from years of playing with or against one another.

"In that regard the bubble feels a bit like one of your high school summer camps," Lopez said.

Lopez, who visits Orlando several times a year, has already given Bucks coach Mike Budenholzer a list of about 20 Disney World restaurants for team meals, he said.

Before the team arrived in Florida, the Bucks sent several truckloads of equipment including reproductions of the artwork hanging in their Milwaukee weight room, general manager Jon Horst said.

Players also packed items to remind them of home.

Shooting guard Wesley Matthews, a Marquette University alum, brought his Xbox and some scented candles, he said. On his nightstand, there’s a photo of him and his daughter.

DiVincenzo brought "a lot of clothes, a lot of video games and some cards."

To start, teams could bring just 35 people into the bubble, including players. The league plans to allow families to join beginning in late August, after the first round of the playoffs.

Bucks small forward Sterling Brown said he welcomes this time of isolation. Brown, who has played an active role in the social justice movement sparked by the police killing of George Floyd in Minneapolis on Memorial Day, said he plans to use his time in Orlando to continue learning about and speaking out on issues of race and equality.

Players will have the option of wearing a social justice message on their jersey when play resumes. Brown’s will read "Liberation."

Finishing Out The Season

The Bucks will face the Boston Celtics Friday night in the first of eight seeding games, which combined with regular season records before play was suspended, will determine which 16 teams make the playoffs.

The playoffs will be played in their standard format and begin Aug. 17.

The Bucks are considered favorites to win the Eastern Conference, though they could face stiff competition from the likes of the Celtics and the Toronto Raptors.

Before the NBA’s four-month hiatus, the Bucks had the best defense in the league and one of its top offenses, but it’s tough to know how dramatically they’ll be affected by the long layoff.

The Bucks have played three scrimmages in Orlando, dropping the most recent to the New Orleans Pelicans. The good news for Milwaukee fans is Antetokounmpo appears ready to play – he posted 30 points in 23 minutes.

The Lakers and the Clippers, both from Los Angeles, are considered the top contenders to come out of the Western Conference.