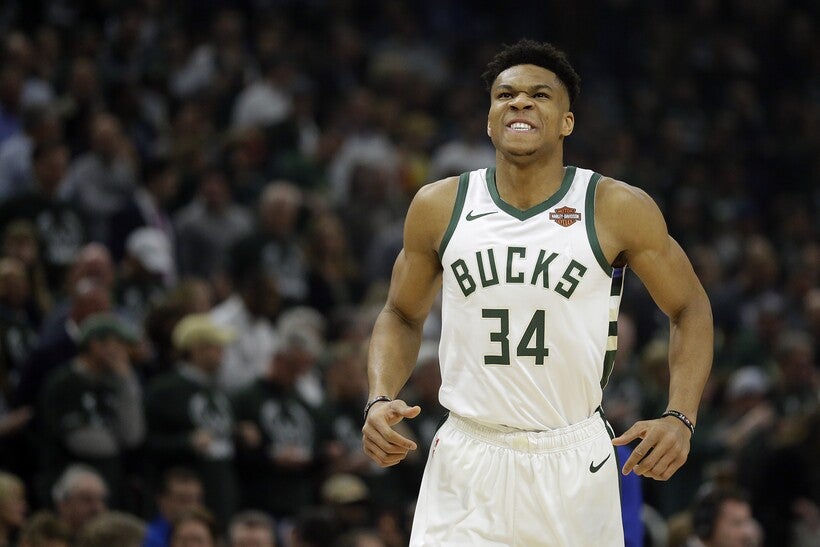 Giannis Antetokounmpo has signed a five-year extension with the Milwaukee Bucks. It's the biggest contract in NBA history.

"This is a big moment for me and my family and I want to thank the Bucks organization for believing in us," Antetokounmpo said in a statement. "You took a chance on us eight years ago and now putting my signature on a contract like this is unreal – but it’s all because of hard work."

Antetokounmpo originally tweeted the news that he planned to re-sign with Milwaukee: "This is my home, this is my city. I'm blessed to be able to be a part of the Milwaukee Bucks for the next 5 years. Let’s make these years count. The show goes on, let’s get it."

This is my home, this is my city.. I’m blessed to be able to be a part of the Milwaukee Bucks for the next 5 years. Let’s make these years count. The show goes on, let’s get it. 🤎🙏🏽 pic.twitter.com/895tCBE9RK

Bucks President Peter Feigin was on a call with the Milwaukee Press Club when Antetokounmpo made the announcement.

"Giannis is a generational player. What it means to the Milwaukee Bucks, what it means to our market and to our team, and what it means to me personally and professionally, it's hard to really state the importance of it," he said. "This is a monumental kind of event."

He called it one of the "great days in Bucks history," before excusing himself from the panel to call his wife.

"It doesn't get better than this announcement in December in a year that is so tough," Feigin said.

For months, there's been speculation over whether the two-time reigning MVP would re-sign with the Bucks. The deadline for Antetokounmpo to ink the extension this offseason is Monday. The five-year deal is worth $228 million.

Antetokounmpo will become the sixth player to sign a supermax extension, designed to give teams a leg up when it comes retaining star players who are set to become free agents.

Last season, Antetokounmpo averaged nearly 30 points per game. He became the third player in NBA history to win MVP and Defensive Player of the Year in the same season — the other two are Michael Jordan and Hakeem Olajuwon.

Despite finishing with the best regular-season record in the league last year, the top-seeded Bucks were bounced from the NBA's coronavirus bubble in the second round of the playoffs by the Miami Heat. The team made changes this offseason including trading point guard Eric Bledsoe to the New Orleans Pelicans in exchange for replacement Jrue Holiday, a solid defender with a proven record in the playoffs.

The Bucks open the 2020-21 season Wednesday, Dec. 23 against the Boston Celtics. During the offseason, the team announced an indefinite ban on fans at Fiserv Forum.